The fact that sexism is still rampant, especially in Hollywood, isn’t news.

Despite the strides women continue to make towards equality, there are still plenty of men out there who believe that the opposite sex exists purely as an accessory for their own lives.

Turns out, even Reuters isn’t immune to that. The news organization shared a ridiculously misogynistic tweet about Kirsten Dunst last week that was infuriating but also launched one of the best Twitter memes in recent memory.

It all started when Kirsten Dunst was awarded a well-deserved star on the Hollywood Walk of Fame. Given that her successful career has spanned more than 20 years at this point, I’d say it was high time it happened. However, when Reuters reported on the event, they claimed that Dunst is best known as “Spider-Man’s girlfriend.” 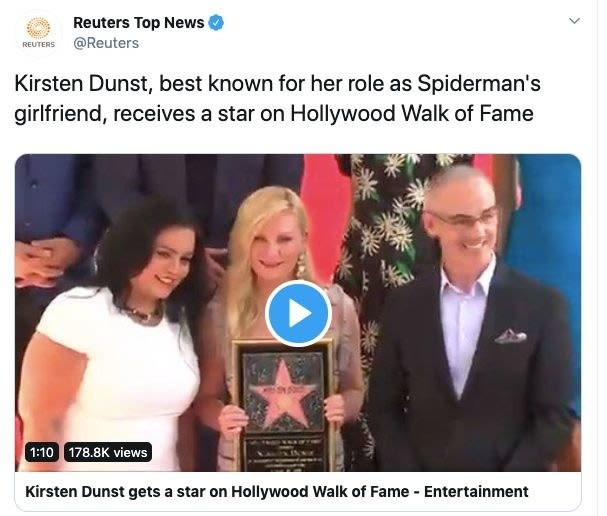 Uh, hold up. First of all, Dunst has had lead roles in everything from Interview with the Vampire and Little Women to Marie Antoinette, Virgin Suicides, Bring It On… I think you get my point.

Appearing as Mary Jane Watson in Spider-Man 3 was but a blip on her radar, so framing this as the pinnacle of her career is not only disrespectful, it’s completely misguided.

Thankfully, Reuters was shamed into deleting the tweet and Twitter users responded to their nonsense by creating one of the best, most wholesome memes in recent memory. It highlights all the talents of female actresses as well as their versatility while pointing out just how little credit they receive for their work.

Here are some of the best tweets that popped up because of Reuters’ misstep.