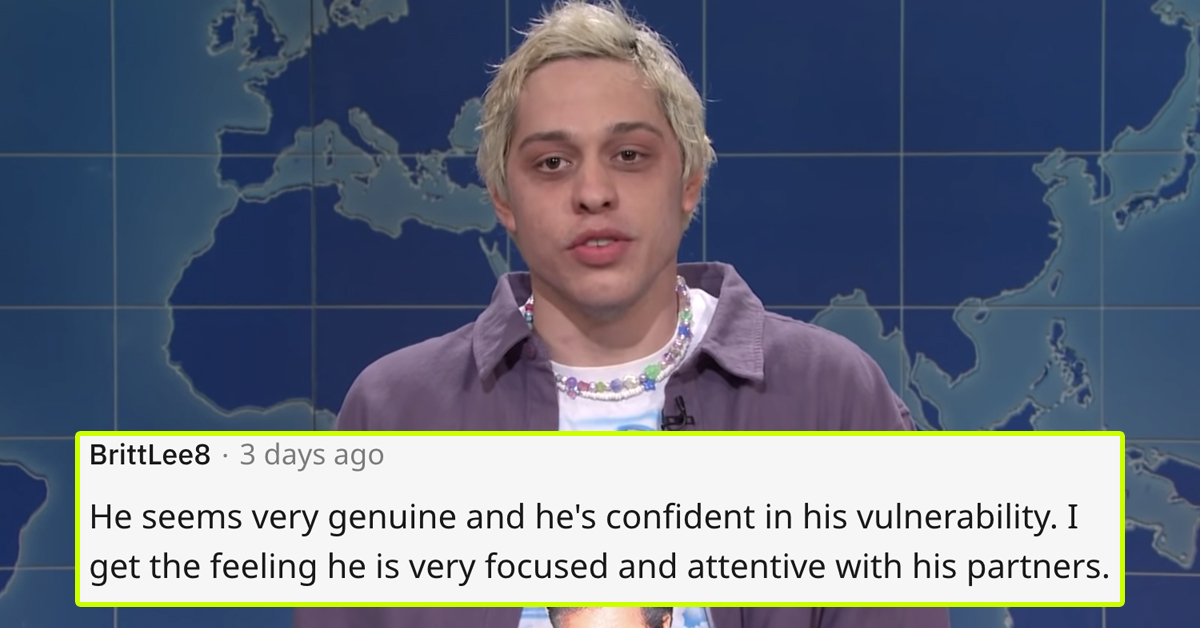 Pete Davidson has dated a lot of famous women — Ariana Grande, Kate Beckinsale, Phoebe Dynevor, and now Kim Kardashian. And it has people wondering: why are these women into this guy?

I’m gonna be real a second: I think that’s some *high level bullsh-t*. If the dude is nice and the women he dates are into him, it’s pretty gross to rag on the couples with “why is SHE with HIM” energy. But I guess it’s a thing people want to devote time and brainpower to speculating, so… here we are.

“People who are attracted to Pete Davidson, why?”

Some of the answers were jokes, but some of them were also terrifically sweet. So in a world that seems willing and ready to mock Davidson, I hope you stop to mull on the nicer responses below during your chuckles through the jokes!

“He seems very genuine and he’s confident in his vulnerability. I get the feeling he is very focused and attentive with his partners.” —u/BrittLee8

“He’s like your weed dealer whom you feel safe around for some reason and when he starts cracking jokes, you realize you’d hook up with him.” —u/icphx95

“He has a cute smile and facial expressions. The way he holds himself is confident but not cocky like some other male celebrities. He’s laid-back but not pathetic laid-back. It’s his energy more than his actual appearance.” —u/10ioio

“He’s very open and candid about his struggles with mental health and people who are that genuine and honest — while also kind — are often considered to have attractive personalities.” —u/Dangaard1075

“This guy meets these women and just wants to get to know them, meet their parents, and take them to Staten Island to meet his mom. I can see how being famous but still being earnest and sincere with people he likes works in his favor in a big way.” —u/Kmlevitt

“He’s not a supermodel or anything, but I don’t find him bad-looking at all. He has nice lips and a good smile. I like his tattoos. He reminds me of the funny misfit dudes I was into in high school.” —u/friendofredjenny

“He gives off real second lead energy. If you watch many Korean dramas, you’ll notice there’s usually a hot guy who’s a total asshole (he’s the guy the girl almost always ends up with). And there’s usually a less attractive but gentle second lead guy, who treats the girl kindly and you root for.” —u/KeriEatsSouls

“He’s funny, smart, doesn’t take himself seriously. Treats his exes with respect, is good to his momma, is more interested in having fun than dumbass drama. Actually has a life, takes his dates out for a fun evening. Honest, vulnerable . He’s basically a golden retriever of men. He’s also full of skinny boy BDE. Like he knows he doesn’t have to prove he’s a man. We already know.” —u/Inner_Art482

“HE HAS A GOOD RELATIONSHIP WITH HIS MOM.” —u/bdette1

“He’s successful, funny, and confident. People underestimate how these three things make someone stand out from the crowd a LOT. There are so many people just milling about, unsure of themselves and just copying what they think is acceptable.” “So when someone doesn’t do all that and finds success from personality alone, it’s hot because it shows individuality and drive.” —u/geromesinthehouse2

“He gives the impression that if you met him, he would try to make it a positive interaction and fun. But if you didn’t like him, he would not care. It’s the combo of caring about others, while still having the confidence not to pander or take it as a blow to his ego if people don’t like his personality.” —u/pancakeblanket

“He seems like the kind of guy who isn’t afraid to hold a woman’s purse.” —u/Individualnineteen

“He’s like a dirty string bean with the mouth of a truck driver and a fucked-up sense of humor. Can’t tell ya why, but my ovaries are really into it. He’s cracked the code.” —u/pepperives