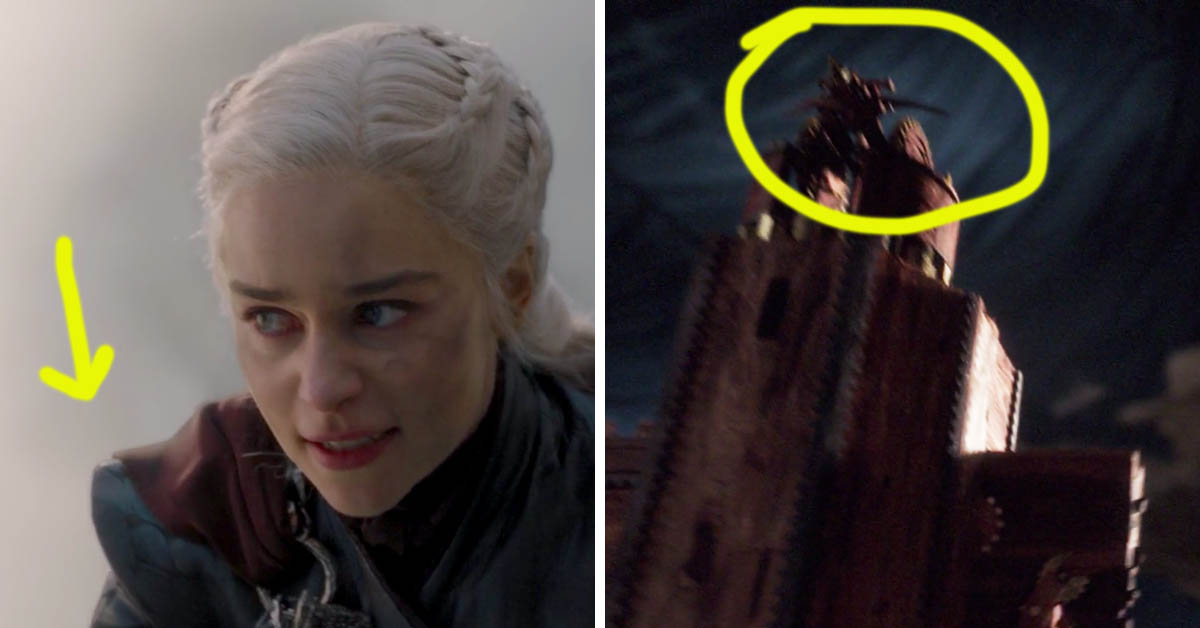 Warning: There are obviously spoilers for Game of Thrones Season 8 Episode 5,’The Bells’ ahead!

The fifth episode of Game of Thrones‘ eighth season aired Sunday night, the penultimate episode of the entire series. People were expecting a lot but many found themselves less than impressed with some parts of the show.

But the cinematography was gorgeous and a lot of stuff did go down: the deaths of some major characters, a lot of fighting, and even more fire. What with everything going on, you probably missed a few things, so let’s go over some details from the 80-minute episode.

1. The “previously on” segment included some important hints about what was to come.

Before the episode even started, in the “previously on” segment, seven lines of dialogue were carefully selected from past episodes, all relating to Daenerys Targaryen’s temperament and predicament:

“Every time a Targaryen is born, the gods flip a coin.”— Cersei Lannister (season two, episode seven)
“The Mad King gave his enemies the justice he thought they deserved.”— Barristan Selmy (season five, episode two)
“Children are not their fathers.”— Tyrion Lannister (season seven, episode three)
“Be a dragon.”— Olenna Tyrell (season seven, episode two)
“You have a gentle heart.”— Jorah Mormont (season two, episode five)
“A Targaryen alone in the world is a terrible thing.”— Aemon Targaryen (season five, episode five)
“You don’t want to wake the dragon, do you?”— Viserys Targaryen (season one, episode one)

2. The opening credits were slightly different.

Keeping in line with this season’s ever-changing opening credits, this episode had a tiny change—the addition of two of those huge cross-bows (called Scorpions) to the gates at King’s Landing. Of course, now that we know that Daenerys and Drogon destroy them, they’ll probably be missing from next week’s beginning.

3. What Varys was writing in the letter at the beginning of the episode could be important for the next and final episode.

Because the letter text flashed by so quickly, you may not have caught what it said. Here’s what Varys had written (the part that was legible):

“…is not the only Targaryen left. Rhaegar and Lyanna […] their son lives still — hidden by Eddard Stark. His name […] and he is the true heir to the Iron Throne.”

We don’t know how many birds he managed to send out with this message before he was caught, but that could come into play in the finale.

4. Varys was using one of his “little birds” (named Martha) to try to poison Daenerys.

Varys was disappointed to find out that Daenerys wasn’t eating anything not because he was worried about her welfare but because he was trying to poison her. Here’s their exchange:

Martha: “I think they’re watching me.”

Martha: “The bigger the risk, the bigger reward.”

5. We’ve seen this Martha girl before.

During the Battle of Winterfell, anyone who wasn’t fighting was hiding in the crypts (which seems like a weird place to hide given that the Night King was raising the dead but OK)—that included Varys. In one part, we saw Varys in a corner with a group of children, one of whom was Martha.

6. Daenerys had threatened to burn Varys before.

As you know, Varys was killed via dragon fire (pretty handy weapon). But what you may not remember is that Daenerys threatened to do that very thing in the second episode of season seven. She straight-up told Varys, “And I swear this: If you ever betray me, I’ll burn you alive.”

Yup, the location of Varys’ death was the same place where Stannis Baratheon and Melisandre once burned people alive for refusing to believe in the Lord of Light.

8. There was something familiar about the place Cersei Lannister was standing as she watched King’s Landing burn.

Cersei stood in her castle chambers, watching the city, the exact same way she did during the finale of the sixth season. At that time, she was watching as the Sept of Baelor was blown up using wildfire.

Similar scene but different outcomes—this time Cersei was not victorious.

9. Speaking of wildfire, did you notice the small batches of it blowing up as King’s Landing was being destroyed?

Do you remember the stories about how the Mad King, Daenerys’ father, had placed caches of wildfire all throughout King’s Landing? That was them blowing up (most likely—Cersei probably could have had some made, but it seems more likely it was the hidden stashes), which was a nice tie between Daenerys and her dad.

10. The shot where we see Drogon’s shadow cast long over King’s Landing was basically the same one Bran Stark saw in an earlier vision.

Here’s what that scene looked like in Bran’s vision, replete with dragon shadow.

It was in “The Lion and the Rose,” the second episode of the fourth season that Bran touched a weirwood tree and had a series of visions, including the one of the shadow over King’s Landing. He also saw the Night King for the first time.

11. In that same series of visions, Bran also saw what looked like snow falling into the throne room. 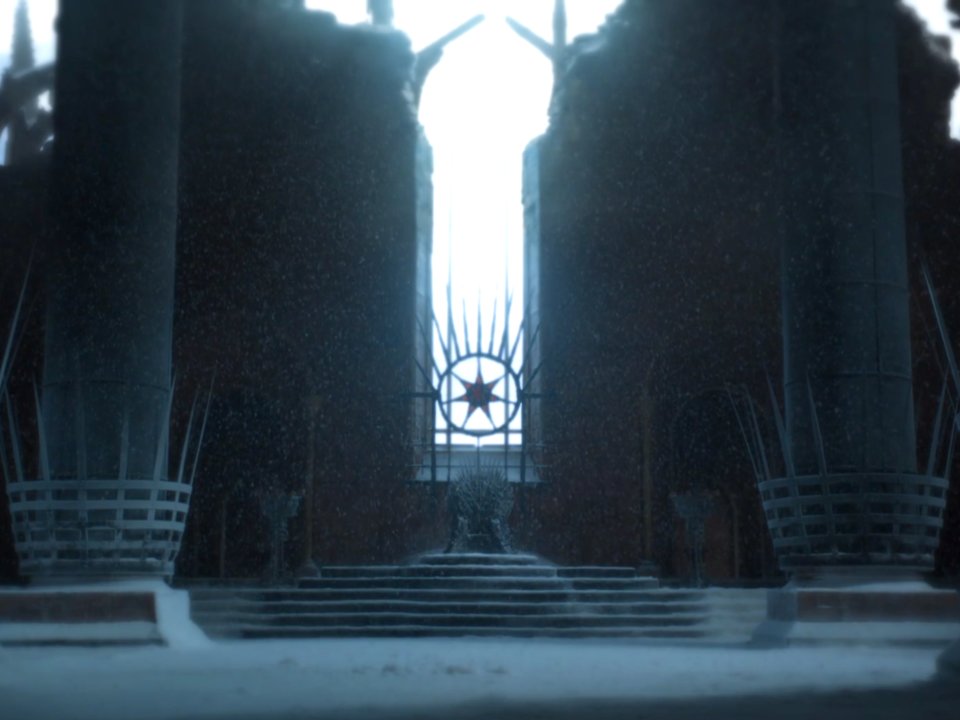 HBOThis could signal that Jon Snow will sit on the Iron Throne. Or it could be ash…

12. Daenerys has also had a vision of snow on the throne.

Daenerys had a vision of the Iron Throne covered in snow when she entered the House of the Undying. She reached for it and almost touched it but her dragons cried and she pulled away.

Daenerys may have been taking the advice (heard in “previously on”) to “be a dragon” because the upper part of the sleeves of her gown had a scale pattern.

14. We actually don’t see Daenerys at all, just the dragon, after the bells ring signifying the city’s surrender.

In HBO’s “The Game Revealed” segment, the director of the episode, Miguel Sapochnik said that Daenerys continued to attack the city even after they’d surrendered because “She feels empty. It wasn’t what she thought it was. It’s not enough.” Grey Worm and Dany are both out for blood, avenging the deaths of Missandei and all the others that have been killed.

But after the moment where she decides not to stop attacking, we don’t see her again.

15. The way the Hound killed the Mountain was the same way Arya once said she’d kill the Hound.

The Clegane brothers finally had their duel, and Hound finally managed to kill his brother, the Mountain, by stabbing him in the eye. Of course, he dies in the process of murdering him, but still, mission accomplished.

But it’s interesting to note that the way Sandor killed his older brother Gregor was the way Arya told Sandor she’d kill him in episode nine of season three: “Someday, I’m gonna put a sword through your eye, and out the back of your skull.”

16. Jaime Lannister died the way he said he always wanted to.

In season five, Jaime told Bronn that he wanted to die “in the arms of the woman [he] loves.” Well, that did come true, as he died with his one and only true love, his twin sister Cersei.

At the end of the episode, having barely survived the destruction, Arya comes upon a white horse. Is this a good sign or a bad one? No idea. In general, white is thought of as the color of the “good guys,” but then again, there’s Death riding on his pale horse.

But this isn’t the first white horse that’s been in the episode. 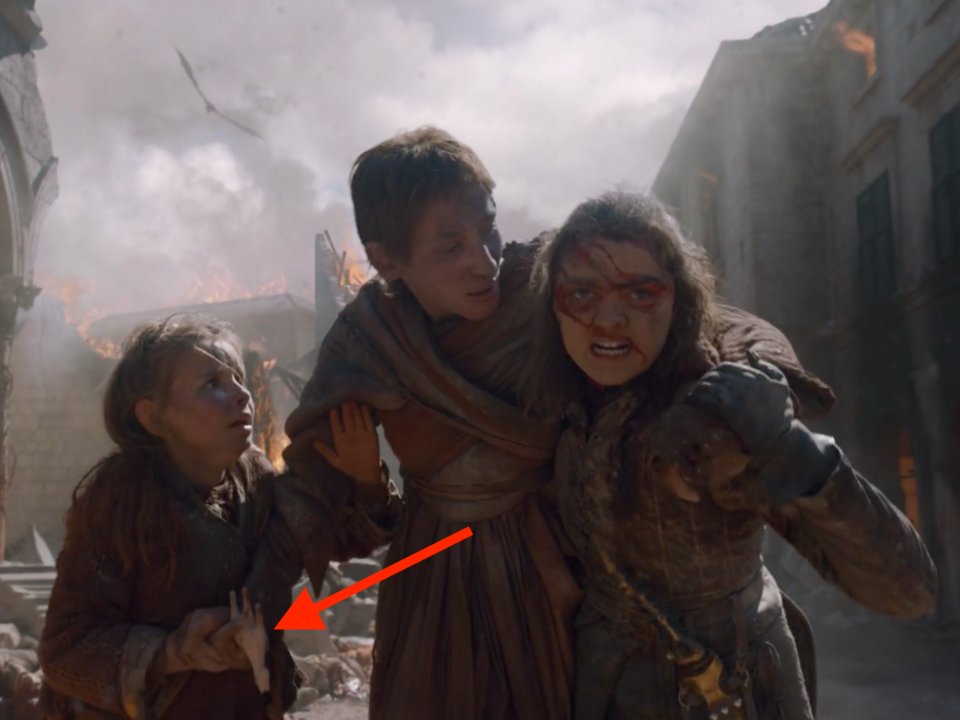 Earlier, a woman, a young mother, had helped Arya up when she needed it. Arya tried to repay her kindness by saving her and her daughter and navigating them to safety. It didn’t work, but if you look closely, you can see that the little girl is holding on to a white horse.

Keep these details in mind when you’re watching next week!