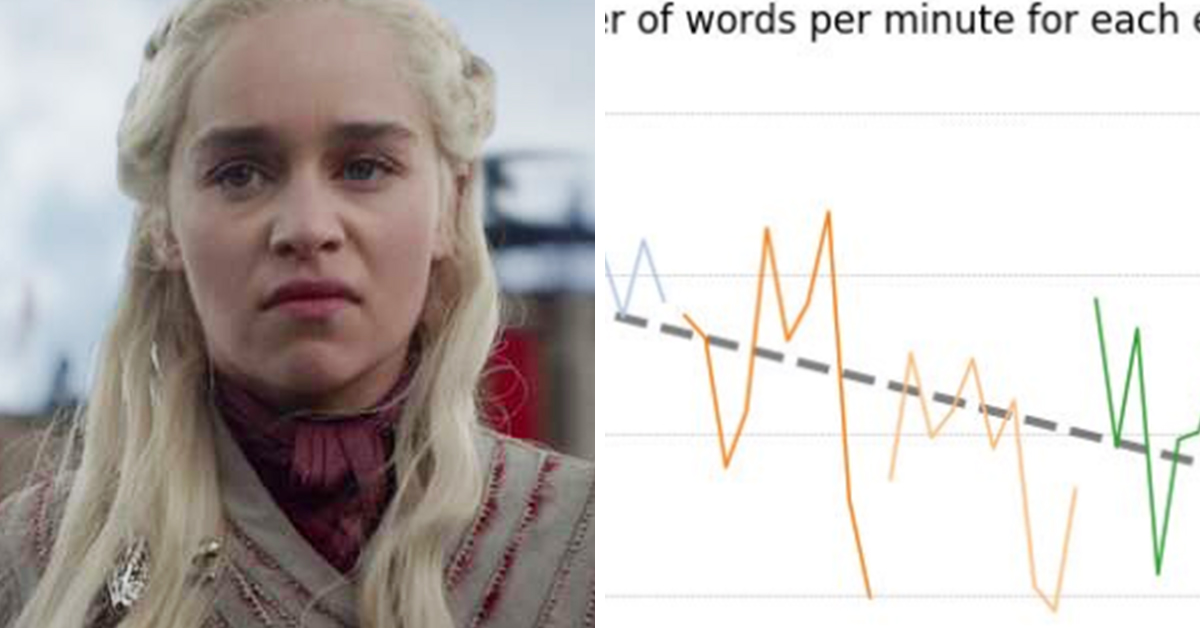 Game Of Thrones fans may have a scientific reason to explain why season eight sucked so much ass: not enough dialogue.

According to a chart pulling data from opensubtitles.org, there’s a direct correlation between the number of words in each episode and what fans perceive as a decline in the show’s quality:

To give the chart context, the epic series, based on novels by notoriously slow-penned George RR Martin, ran out of source material during season six, as Martin had yet to finish the final installment.

Presumably, since Martin had only provided the showrunners with a rough outline of how he’d planned to conclude the saga, the chart gives credence to the notion that the drop in words per minute and the show’s quality after can be directly attributed to HBO favoring spectacle and crowd-pleasing story arcs over the more complex and dark dialogue characteristic of Martin’s novels and the first five seasons.

Some fans think this theory is sound:

I’m interested to hear your conclusions. To me, this makes a lot of sense – you have to explain the story and characters at the beginning and if you’ve done the job right, by the end all you need is Tyrions facial expressions lol.

This seems very appropriate given the increasingly cinematic nature of the show. When it followed the books there was more conveyed via words. Later, on its own, it became more visual.

Other fans were quick to do what fans on Twitter do: make jokes.

This says a lot… unlike the S8 episodes themselves 😉

This says a lot… unlike the S8 episodes themselves 😉

But maybe dialogue has nothing to do with it though, and shows are just hard to keep going while pleasing an increasing fan base?

Either way (and no matter how many negative Reddit threads and Tweets are floating around out there) one data point speaks for itself: more and more people kept watching Game Of Thrones throughout its run.

Surely that speaks to a shows quality better than anything.

More in Game Of Thrones: