It’s always so fun when the actors in a TV show or movie are close to each other in real life. It just gives an extra dimension to the acting, knowing that the people spend time together not just as characters but also as themselves, by choice.

That’s why we so love looking at pictures of Maisie Williams and Sophie Turner together. The women, who play sisters Arya and Sansa Stark on HBO’s Game of Thrones, have a love that flows between them that’s so big it’s practically tangible.

Having an amazing female friend can feel like having a sister—a person who, no matter what they did, you’d never stop loving. That person could even get on your nerves sometimes when you spend too much time together, but just like sisters, you’ll always makeup within like a day and go on like it never happened.

And you get the sense that Maisie and Sophie are like that.

1. When they both found out they got their roles on Game of Thrones the same day: August 7, 2009…

2. And celebrated that anniversary every year…

3. And when they even got matching tattoos of the date.

4. Here are those tattoos close up. 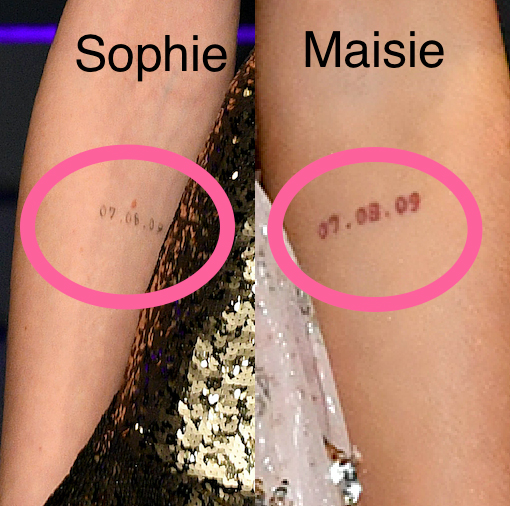 5. When Maisie has jokingly referred to Sophie as her wife.

6. When they have a nickname like the kind celebrity magazines give famous couples:

8. I mean, they really do hang together as regular (as regular as you can be when you’re super famous) people.

9. They also hang out as super famous people, like at premieres and parties.

Here is Sophie fixing Maisie’s dress at the Golden Globes, because good friends got your back.

10. And they’re always affectionate in public.

And here they are holding hands at the Game of Thrones season 8 premiere in NYC.

11. Watching them talk about each other is adorable.

12. And how they talk about working together is also very sweet.

13. And watching them joke around, like when they did Sean Bean/Ned Stark impressions on Carpool Karaoke, is hilarious.

14. They truly are best friends.

Happy 21st Birthday @SophieT
Forever looking up to you, in more ways than one ❤️ pic.twitter.com/43cCih2KeJ