Getting students to pay attention in class is half the battle of teaching, and this is especially true towards the end of the school year when summer vacation is just around the corner. So teachers are using everything they’ve got in their arsenals to keep students focused, and thanks to Avengers: Endgame, they have a new trick to use.

Some ingenious teachers have apparently been using threats of Endgame spoilers to keep students in line. The movie is the follow-up to 2018’s Infinity War, which ends on a huge cliffhanger, so, not surprisingly, it’s working—people are so excited about this movie and they definitely do not want to know any plot points until they actually get to see it.

One student posted a picture of the class whiteboard on Reddit, with the words “In EndGame, within the 1st 20 minutes, _______ _______ because of _______.” The post said, “My teacher was filling in Endgame spoilers every time the class got too loud.” The words Thanos and Thor had already been filled in. 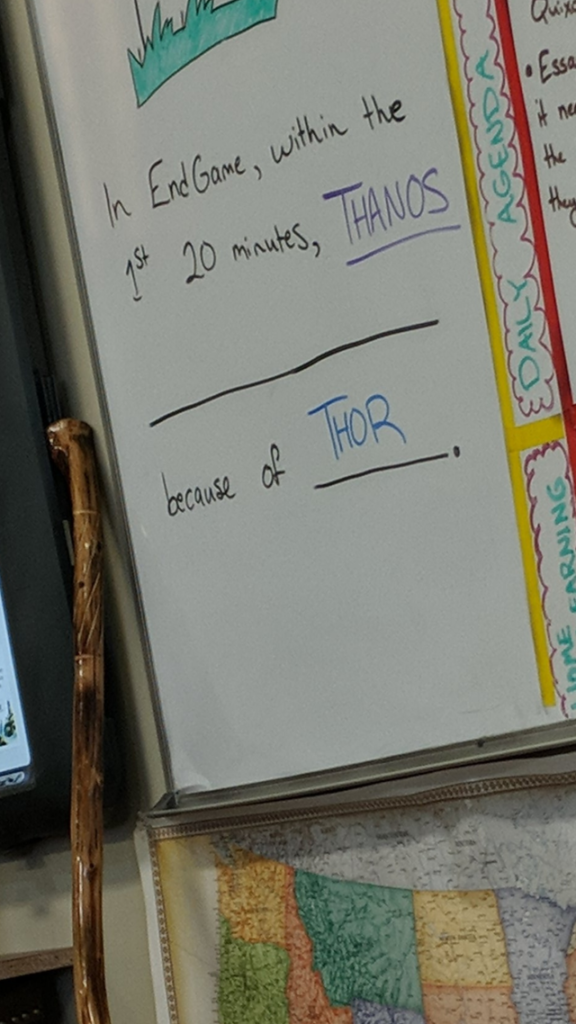 A similar post on Reddit showed a whiteboard with the word “Thano” (no “s”) written on it. The text on the picture read, “Chemistry substitute was slowly writing endgame spoilers on the board every time we talked.” 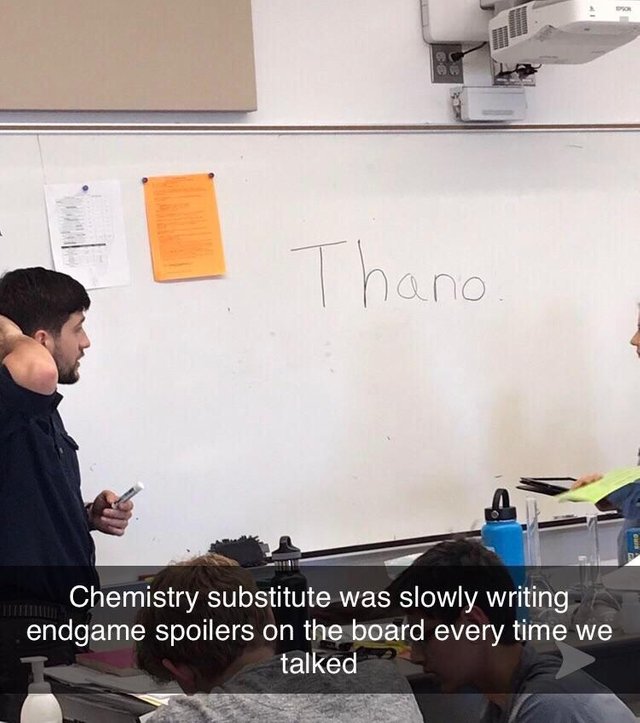 Even if some students had already seen the movie and didn’t care about spoilers, they know they have to be quiet and behave or else they’ll ruin it for their classmates, something that obviously won’t make them too popular.

Insider spoke to a New York City high school teacher who revealed that one of her students had admitted he hadn’t seen Endgame yet. She threatened him with a spoiler when he distracted other students during a class.

“I told him that if he didn’t stop distracting people right now, I would tell him an Endgame spoiler. I could see his eyes widen, and immediately he closed his mouth and turned towards the assignment. I have literally never seen such an instantaneous result with a student.”

She explained that when the weather turns warm, her usual methods of getting kids to behave—reminding them that grade will be affected or threatening to call their parents—don’t “make an impact.” But, she added, one thing kids DO care about Endgame.

It works both ways, though, in that there are some teachers who haven’t seen the movie yet who are basically begging students not to ruin it for them.

Me if I was teacher #endgame pic.twitter.com/0RMBI8xihx

SOME DUDE DIDNT KNOW THE ANSWERS TO THE HOMEWORK

Interestingly enough, the New York City teacher said she tried threatening to reveal Game of Thrones spoilers, but “no one cared.”