If you’re familiar with the Lord of the Rings or Dungeons & Dragons you’ve heard of the race of fantasy creatures called “orcs.” Conceived by J.R.R. Tolkien in his classic fantasy saga The Lord of the Rings the orcs were a race of brutish and warlike humanoids bent on killing and dominating everything in their path. They were the monsters, the bad guys, the foot soldiers of evil.

Criticism has been leveled at Tolkien’s work before for having racial overtones, but the Lord of the Rings books were published in 1954 and 1955. Now modern critics are taking the roleplaying game Dungeons & Dragons to task for perpetuating an image of orcs that they say echoes real-world racism.

The recent controversy was over orcs started when Twitter user Quinn Welsh-Wilson tweeted his low opinion of a description of orcs from the 2016 Dungeons & Dragons book Volo’s Guide To Monsters, calling the passage “blatant racism.” 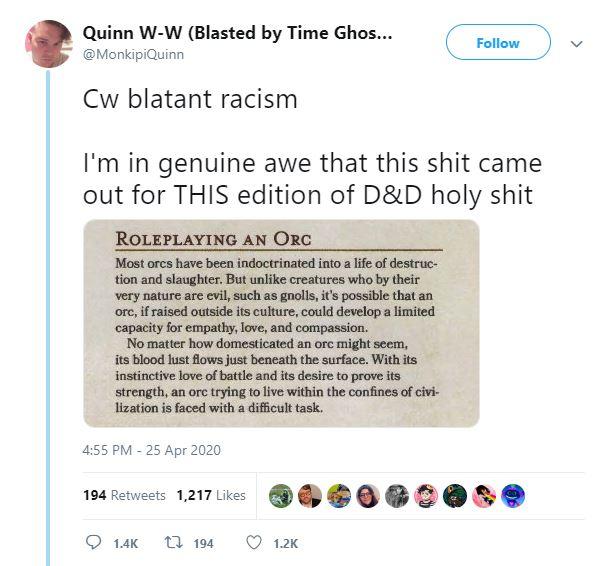 The passage, titled “Roleplaying an Orc” describes orcs as being bloodthirsty and combative but says “it’s possible that an orc, if raised outside its culture, could develop a limited capacity for empathy, love, and compassion.” This section appears to have caught Welsh-Wilson’s eye.

It appears that the tweet received a fairly huge backlash of nerd rage as his tweets are now protected but some of the debate has been archived.

Some responded that assuming a text describing a fantasy creature was an allusion to any particular real-world race was itself problematic. To this Welsh-Wilson responded that he was referring to “Language used by colonizers to justify colonial violence.” 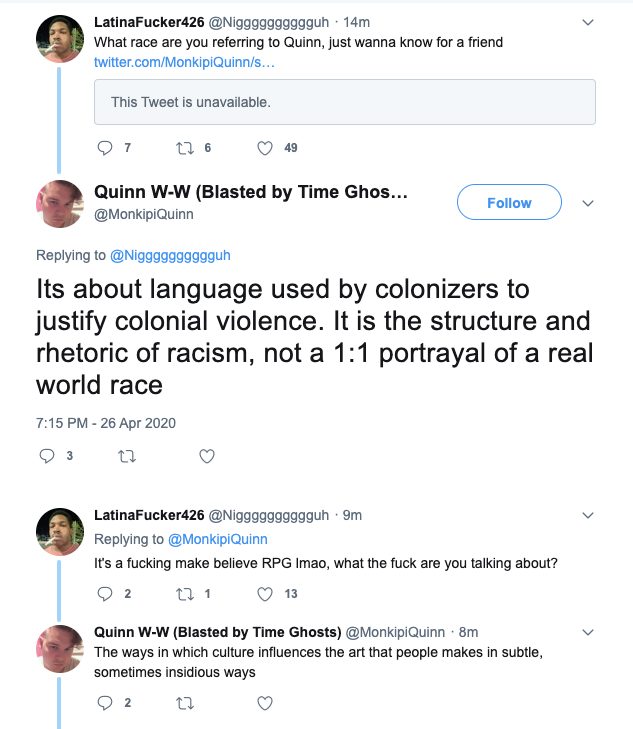 The debate quickly degenerated (as online debates almost instantaneously do) with everyone calling each other racist. 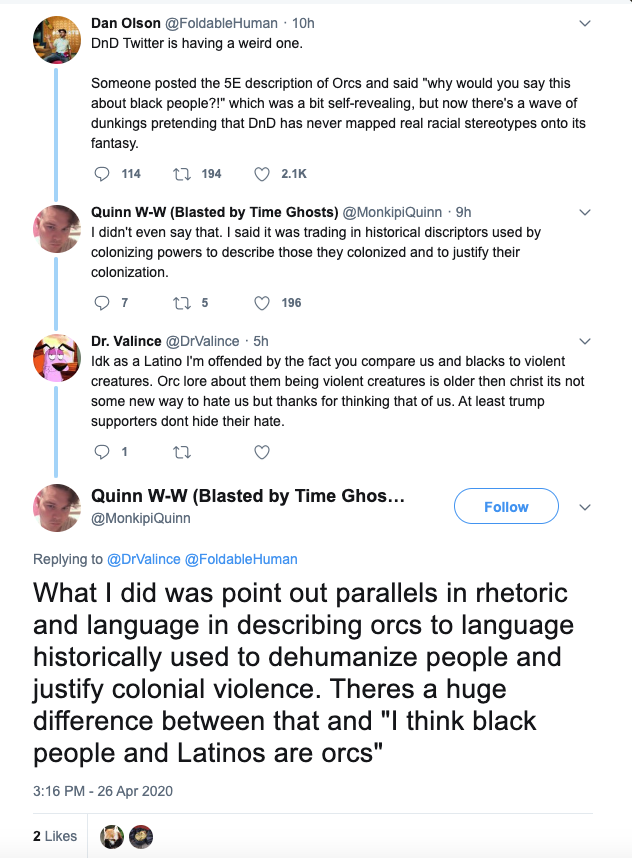 The website Comicbook.com quickly chimed in with an article titled “Why Orcs Are Problematic In Dungeons and Dragons.”

Welsh-Wilson has a point that the language used to describe orcs here wouldn’t have been out of place in racist colonialist writings. There are strong echos of the “white man’s burden” here.

The language used here is that language. Orcs, sentient beings, can be “domesticated.” They have an underlying, inherent rage and blood lust that’s just part of their biology. This is harmful because of the real world parallels to a ton of racist tropes. pic.twitter.com/veelhetuVA

But it’s also unclear what the alternative to starkly stereotyped races in a fictional fantasy game is.

Along with orcs, Dungeons & Dragons also features elves, dwarves, gnomes, kobolds, gnolls, giants, and dragons all of which are portrayed as extreme stereotypes of whatever their lore entails (i.e. elves are ethereal/arrogant, gnomes are curious/naive, dwarves are clannish/greedy, and so on). These are meant as simple frameworks for developing a fantasy character and as jumping-off points for telling a story.

Some people argue that you have to change some of the rules and mechanics of D&D, for example getting rid of racial bonuses and penalties that make, say, elves weaker but smarter and orcs stronger but less intelligent.

Orcs are the most obvious, but the entire concept of racial essentialism that is built into the rules (“all elves are like this, all dwarves are like that”) is problematic and smacks of eugenics. To say nothing of how, through 4e, all art showed nearly all heroes as white

Whether the orc as a popular fantasy race will endure or be deemed a relic of a racist eras past remains to be seen. Dungeons & Dragons has embraced change and expanded in many ways while hewing to its traditions in others. It’s also unclear, thanks to the amplifying and distorting effect of social media, how many people actually have a problem with orcs the way they are. In any case it seems the debate is likely to continue.