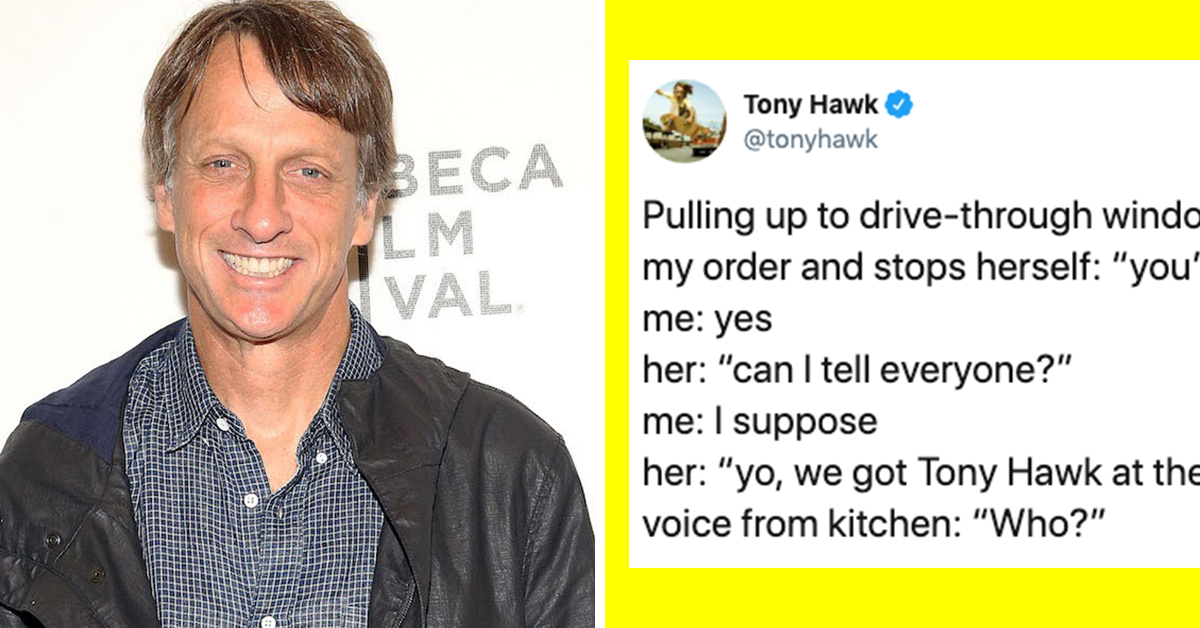 They say you should never meet your heroes.

For skateboarding legend Tony Hawk, it would appear many people heed that advice by simply not realizing they’ve even met him.

Last year we covered the phenomenon of Tony turning to Twitter to hilariously chronicle each time a “fan” failed to recognize him, but since then Tony has shared dozens more awkward encounters, so we figured we owe everyone an update.

First off though, in case you don’t know, Tony Hawk is a pro skater — generally thought one of the best of all time, and certainly one of the most recognizable.

But this is Tony Hawk now:

Still looking young, if I may say so, but apparently not young enough to merit being correctly ID’d ad the drive through…

Pulling up to drive-through window, girl starts to read back my order and stops herself: “you’re Tony Hawk?”
me: yes
her: “can I tell everyone?”
me: I suppose
her: “yo, we got Tony Hawk at the window!”
voice from kitchen: “Who?”

Or by the TSA.

TSA agent (checking my ID): "Hawk, like that skateboarder Tony Hawk!"
Me: exactly
Her: "Cool, I wonder what he's up to these days"
Me: this

TSA agent (staring intently): I’m trying to figure out who you look like before checking your ID.
Me: ok
TSA: that cyclist Armstrong!
Nearby agent: that ain’t Lance Armstrong
Me: he’s right
TSA: oh you look like that skateboarder (checks ID). Same last name too! Crazy!
Me: crazy

Or as a skateboarder at all.

guy at restaurant: "you famous?"
me: I think that depends on who you ask
him: "anyone ever tell you that you look like Tom Brady?"
me: never

Or as Patrick Swayze (who sadly passed away in 2009)

In NYC, guy cutting meat at deli looks up with confusion:
“you freaked me out, I thought you were that guy from the movie Ghost”
me: Patrick Swayze?
him: “No, his friend that betrays him”

Or at the TSA again.

To clarify: my legal name is Anthony

TSA agent checks my ID, looks at me, looks at ID, looks back at me quizzically and loudly says
"Tony Hawk's my favorite skater"
Me: I’ll tell him.

Actually, it seems to happen a lot when he travels.

Woman on plane retrieving her luggage in the overhead:
"Who's skateboard is this? It's blocking my bag"
me: that's mine, you can pass it here
her: "It's yours? You ride it?
me: yes
her: "Are you any good at it?"
me: sometimes
her: cackles maniacally, exits plane

Flight attendant checking overhead bins, sees four skateboards
Him, jokingly: "is Tony Hawk on this flight or something?"
Looks down, sees me
Him: "I guess he is"
🛹🛹🛹🛹 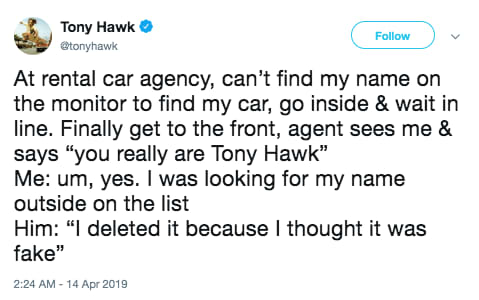 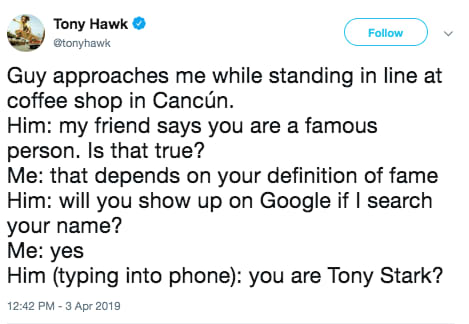 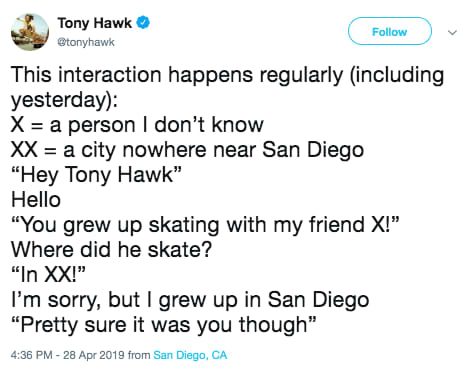 Kudos to Tony for having a good sense of humor about all of this. God knows even if he didn’t, I’d still think it was hilarious.