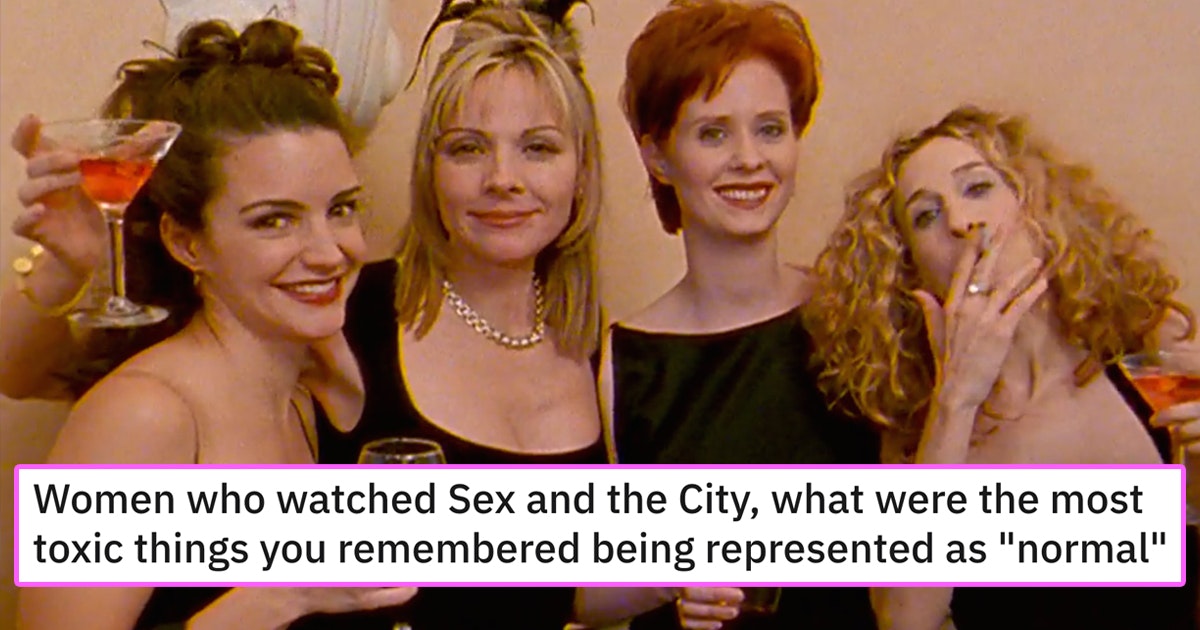 Sex and the City was one of the most controversial television series of its time.

It originally ran on HBO from 1998 to 2004 and has since spawned two blockbuster movies and a reboot, called And Just Like That.

The original series tackled many different topics about sexuality and relationships and brought them into mainstream conservation. However, many of the plotlines have aged as a mayonnaise-based salad at a picnic on a hot day.

Reddit user dancingkitty1 recently posted a question for Sex and the City fans in the SubReddit AskWomen and inquired”:

“Women who watched Sex and the City, what were the most toxic things you remembered being represented as ‘normal’?”

Hundreds of contributors began sharing what moments of the acclaimed show have not aged well and now are regarded as super toxic, inappropriate, and unacceptable.

1. When Charlotte asked a man to remove his foreskin

“The season 2 ep. where Charlotte is so upset about seeing a normal penis that she pressures a partner into circumcision. Not one character even says anything like “you’re being unreasonable” or “my dick is fine the way it is.” I basically stopped watching after that.”

One of the most mentioned plotlines in the thread involves Carrie dating a younger man who reveals that he’s bisexual. It evolves into a game of spin-the-bottle with SJP locking lips with 90’s sensation Alanis Morrisette.

After sharing a cigarette-filled kiss, Carrie decided tastes like chicken and that bi-sexuality was nothing short of a gateway to Gay-Town.

“When Carrie said in the show that she isn’t even sure bisexually really exists and that bisexually is just a layover on the way to gaytown, that just proved to me, that my attraction to women is not real. I struggled with my sexuality for a long time… it would help tremendously if they were not so biphobic and if they expressed more positive attitude towards different sexual attractions.”

As a sex columnist, Bradshaw should have been more open-minded and non-judgemental. In the words of Alanis Morrisette, “YOU OUGHTA KNOW!”

3. All of the offensive gay stereotypes

“I think they reduced the gay characters to complete stereotypes and occasionally they were just treated as fun accessories for the girls instead of real people. It was very dehumanising.”

The writer of this article also sympathizes.

5. Neglecting to represent the hugely diverse population of NYC.

“No black (or non-white) people in NYC.”

6. Again, with the offensive stereotypes!!!

“There was a storyline where Samantha was dating a girl and she was Portuguese I think. I remember her name was Maria. If I recall when they broke up she threw plates… yeah that story line was not a good look…”

7. The glorification of compulsive shopping

” All the implusive spending.”

Never forget when Carrie opted to buy Vogue instead of getting groceries because it, “Fed [her] more.”

8. Being a s*** friend who asks for money and expects a handout.

“Borderline bullying Charlorre when she was the only one who did not offer to “loan” Carrie money because she was immature and always spending the rent on shoes. And of course her guilt tripping worked and Charlotte immediately forked over the money.”

9. The show makes women feel insecure about the amount of sex they were or were not having.

“That you were f-cked up if you went over a month without sex.”

“Comments about the amount of Samantha’s sexual partners”

“Transphobia! I’d just started watching the show again and the Season 3 Episode 18 made me just so uncomfortable about (1) the attitude toward sex work and (2) the comments & slurs Carrie and Samantha casually use to describe the women.”

“I am one of the few people who never really loved Aiden, but the way she treated him was monstrous. Mocked the cabin he f******* built himself!, refusing to wear the engagement ring and creating a weird ass cover story about wanting it “close to her heart” BARF, cheating on him, manipulating him back into a relationship that she clearly didn’t actually want, complaining about the noise when he was renovating her apartment FOR FREE!”

Aiden and his adorable dog Pete deserved so much better than Carrie.

13. The “nice guy” treatment of Steve

“I hated Steve. He was the embodiment of Peter Pan syndrome and was so manipulative to Miranda… He gets a puppy after she said she didn’t want one (in HER apartment) because she didn’t want to take care of it. And lo and behold she immediately ends up having to take care it. He tries to pressure her into having a baby despite having no business raising a child. He also cheats on her and everyone browbeats her into forgiving him when it’s clear she doesn’t want to… I always thought Miranda could do so much better than him and hated how everyone basically gaslit her into dealing with his shit because he was nice.”

Some users mentioned other smaller annoyances that made the characters seem even more out-of-touch.

15. The lack of a library in a writer’s apartment

“[Carrie] She’s a writer .. . WHO HAD NO BOOKS IN HER APARTMENT!! Have you ever met a writer with no books????????? Not even trashy romance novels, nothing!! Even a sex columnist would have some kind of writing background which would imply a love of books but NOOOOOOOO.

16. The lack of hair down there

“The episode where Samantha’s fling shaves her pubes. I think this was the first mainstream representation of this and it set the precedent that “normal” women shaved. There is nothing gross about natural hair!”

17. The crazy (but fashionable) footwear

SJP said in an interview with Cosmopolitan that wearing heels on-set for 18 hours as Carrie had destroyed her feet and she rarely wears them anymore.

They also shared what they loved about the series, despite its complexly problematic moments.

“For all the Carrie lovers out there, I just want to say I think SJP did a FANTASTIC job bringing this character to life. While she might be my least favorite character, for every grumpy sentence I wrote, she has a charming, hilarious, and heartfelt scene to match. Carrie is the glue that holds the group together and despite all the failings this show had (to me personally), I really did enjoy it.”

What are your thoughts and SATC opinions? Sound off in the comments!