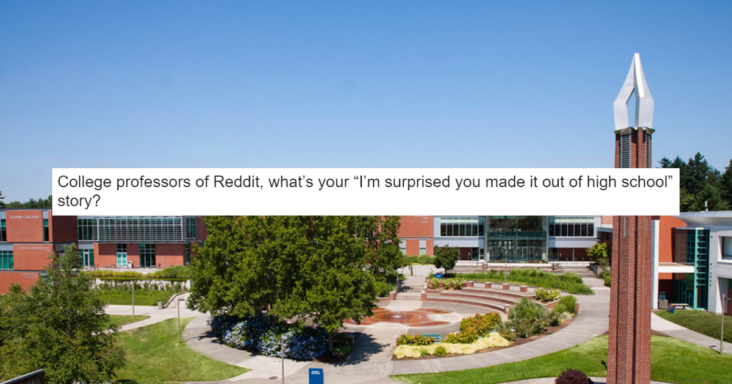 Fun fact for college students: Your professors go on the internet, and they drag the hell outta ya, as this Reddit thread shows.

Redditor redmambo_no6 wanted to know some dirt professors had on their students, so they went to the r/askreddit subreddit to get answers.

In a post, they asked, “College professors of Reddit, what’s your ‘I’m surprised you made it out of high school’ story?”

And those professors delivered, with 3,000 comments.

Here are some of the best stories about clueless students from college professors.

“I once spent an hour explaining to college junior that an even number is divisible by 2.”

“I once got an exam essay that mentioned how much Mandela hated the Jews. After scratching my head for a bit and wondering if I’d missed some obvious signs of his anti-Semitism I realized she meant Mengele. As in Josef Mengele, the Nazi “Angel of Death.” Hard to think of a worse person she could’ve confused him for.”

“Not a college professor, but I worked in my university’s writing center for a while.

I had a girl come in with a research paper bibliography that listed “my mom” as a source several times.

When I pressed, she told me her mom looked up everything and sent it to her and she just…put it in the paper. She told me she had always done it that way.”

“I had a student include numerous emojis in a term paper.

A different student came to my office a week after the final, and asked me why she had failed the course. She hadn’t turned in a single assignment, or written the final.”

“My first year teaching I had a student who had failed the previous year due to missing too many cooking labs to pass and not handing in half the assignments.

I had rewritten the curriculum and assignments.

I noticed that this student hadn’t been handing certain things in and had been skipping my lectures, so I decided to have a chat with them.

They thought their marks for that semester were cumulative with their previous year’s mark (with a different curriculum, different assignments, and a different professor) so they just had to make up enough marks to get a passing grade.

This is a post-grad program. They had a BSc in dietetics.

“I teach at a community college that doesn’t actually require a high school diploma to attend, so I’ve seen a lot. Mostly it’s native English speakers who are virtually illiterate. No abstract or critical thinking skills at all.

One wrote a paper about the causes of the Salem Witch Trials. She sided with the accusers because she’d “seen some stuff,” clearly not understanding the assignment.

Another insisted I approve every word he wrote to “make sure he was doing it right,” when in reality he was wanting me to feed him answers since he didn’t do the reading.

Yet another wrote in a discussion board about Lord of the Flies, “I like how they saved all the flies. That was my favorite part.” If you’ve read the book, you can guess the look on my face.

“I had a student who submitted an assignment that consisted of my blackboard notes from a couple years ago. She copied them from her sister’s old notebook. (I have no idea why her sister kept her old English notebook.)”

“There have been disturbingly high numbers of students on a performance based music degree who can’t read music. Not musicologists or conceptual composers who could in theory get away with it. No, these were people turning up expecting to study western classical performance. There was even a master’s student once…”

“Professor at a middle of nowhere medium sized state school with a 80-ish% acceptance rate. Had a graduate student who couldn’t code for the life of him but was a software engineer at an undisclosed incredibly large aviation company. He couldn’t accept that other students who didn’t have jobs were better than him and that the people grading him ‘didn’t have jobs.’ Sent death threats because we failed him on an assignment where his code didn’t run.

He complained to the higher ups and got a C.”

“For a couple years I taught first-year college students in an ENGINEERING program, the majority of whom didn’t know how to do unit conversions. Not even, like, inches-to-centimeters. To repeat … college … ENGINEERING …”