While I am not a vegan, I understand the nutritional and moral reasons for abstaining from animal products. I respect them. But for some, it seems to be more about wanting to exert control over other people’s choices than about honoring the lives of animals. It’s a shame that these types of vegans get the most attention, but some of them are really asking for it.

Like this person who posted to NextDoor and subsequently got shared on the Best Of Next Door Twitter account @bestofnextdoor. If you’re unfamiliar with the platform, it’s a way for communities to communicate with each other, like an online message board.

It has a reputation for being a place for people to report seeing anyone “unusual” their neighborhood to one another. It’s also a place where one vegan in Berkely went to try and shame their entire neighborhood into cooking and eating with their windows closed.

Their post is titled, “Please close your windows when cooking meat!!” It starts:

What’s up neighborhood, one love. As a vegan runner, it’s always hard for me this time of year when the weather starts warming up and folks start opening their windows. Several nights a week I’m out running around dinnertime and when people have their windows open I can smell what they are cooking I’ve notice a sharp uptick recently in smells of folks  cooking meat ad it can be quite overpowering.

Dang. That’s rough. Maybe change what time you run? No, they didn’t want to do that. 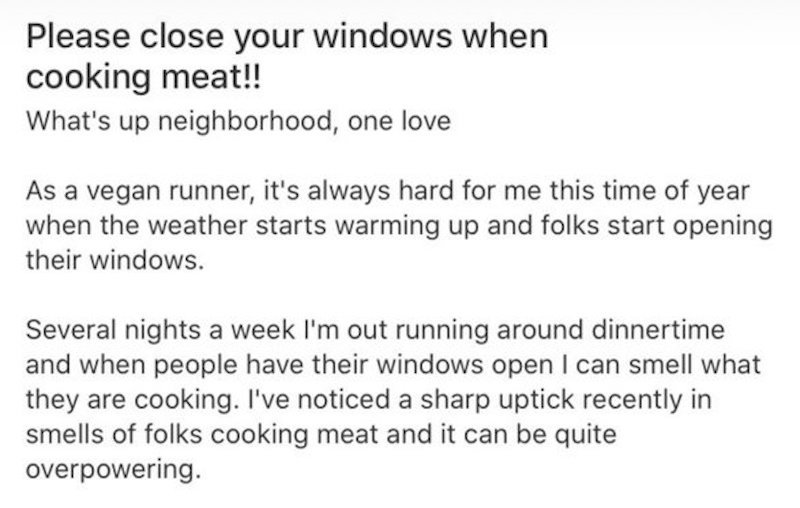 Quite honestly the odor is offensive and I’m hoping our community can have some empathy for its #plantbased neighbors by closing their windows if they are cooking meat and only putting vegetables on their bbq. I don’t want to be a stereotype so I won’t go into detail on why the odor of cooking animals is offensive but I encourage you to do your research and join the movement of ppl who are fighting back. peace love bodhisattva 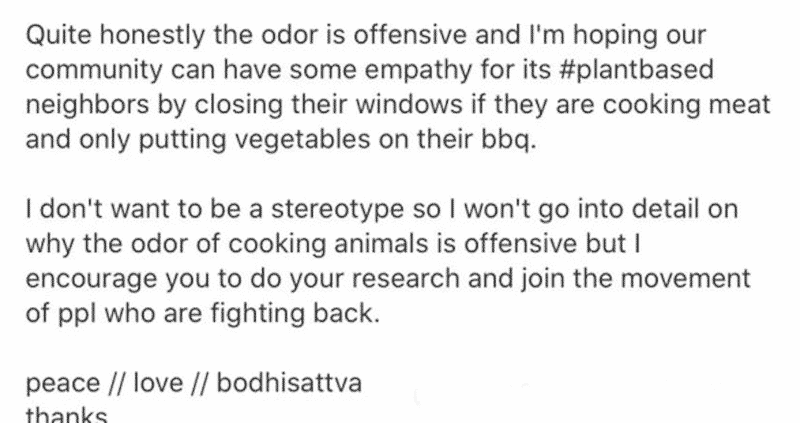 Look, I can understand being disgusted by the smell of meat and not wanting it in your house, or even talking to someone who lives literally next door to you about ventilation if that’s a problem. But to truly expect everyone in who knows how wide a radius to accommodate a lone runner who may or may not be coming through their street is…beyond.

And everyone in the comments agreed:

You know what else smells terrible? Runners. Have some respect, exercise indoors with all the windows locked.

and from Berkeley??? it’s too much.

would you take me by the hand 🎶

I would like to catch them and BBQ them, but they’re too stringy and tough. Namaste. 🙏

I had that same problem when I was pregnant. Like you it would not have occurred to me to expect everyone else to bend over backwards for me.

This person is definitely white.

I once had a friend like that. He quite literally said he “didnt want to be transmitting dangerous radiation unless I need to be online.”

As a carnivore bbq chef, it’s always hard for me this time of year when the weather starts warming up and vegan runners start running by my windows.