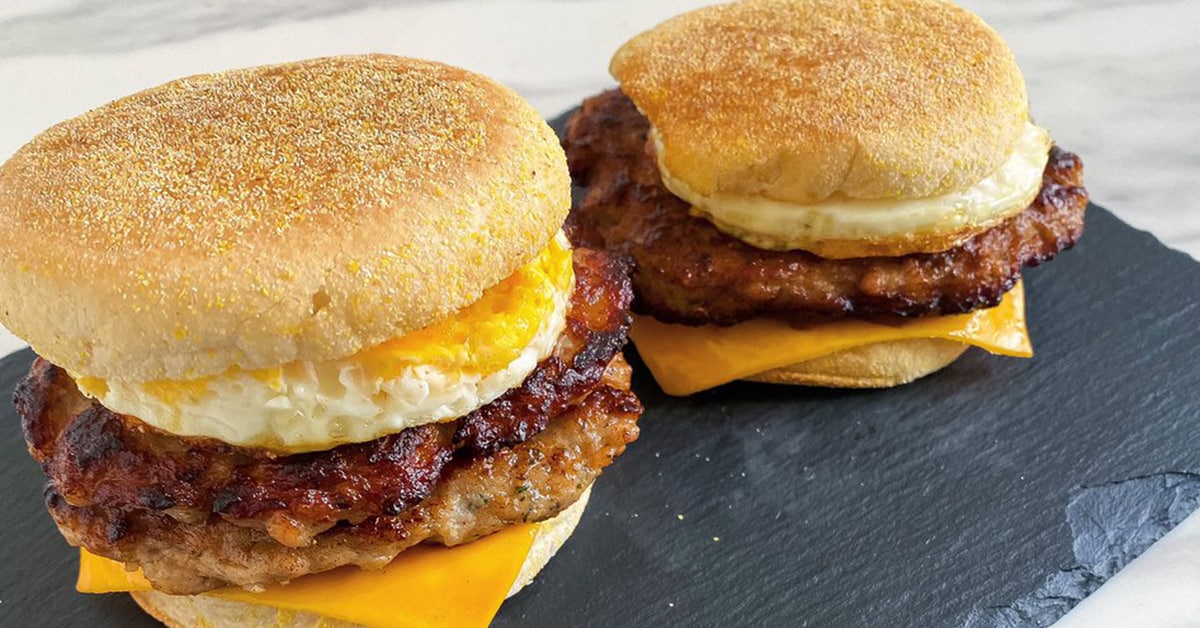 There are few things as comforting as a McDonald’s sausage and egg McMuffin. Post-hangover? Eat it. Weekend craving? Grab one. Going in early to work? Definitely get one (or two). But in COVID-19’s quarantine apocalypse, people are definitely missing some of their creature comforts—and that includes a savory, delicious, not-super-good-for-you-but-who-cares McMuffin. Mmmm.

To remedy this particular sorrow, McDonald’s has nicely released its McMuffin recipe, which, hey, seems super easy, right? Not exactly. Because no one—not even an award-winning chef—can recreate the nasty-but-amazing goodness of this best-selling classic fast-food breakfast. The chain also offered up a recipe for their crispy hash browns. *Faints*.

Here are the instructions:

Here are the ingredients:

– Season with a pinch of salt and pepper then shape into balls. Flatten into patty shapes and cook under a pre-heated grill for six to seven minutes on each side (or as per instructions on packaging).

– Brush the inside of a metal ring with a little oil and place in a small frying pan. Pour in just enough water to cover the base then bring to the boil. Crack the eggs into the rings, cover the pan and cook for two-three minutes.

– Assemble your McMuffin by layering the patty and egg on top of a slice of cheese.

– To make a hash brown, grate the potato into a bowl. Mix in an egg, then season with salt and pepper. Heat a glug of oil in a pan then add spoonfuls of the mix. Flatten and cook until golden brown on both sides.

Obviously, everyone under the sun has weighed in (because many of us have nothing better to do).

McDonald’s U.K. Releases Recipe for Sausage & Egg McMuffin So You Can Make the Iconic Sandwich at Home https://t.co/ILyH3vKLdd

So @McDonalds released their recipe for sausage and egg McMuffins and honestly if you want a maccie breakfast fix during this isolation, this is so close to the real deal. Was so happy about it!! #mcmuffin #maccies #InaGarten #photobomb pic.twitter.com/cu0JMS2Pgu

Apparently, people were getting surprise emails from McDonald’s with the recipe…

Did anyone get an email from McDonald’s saying instructions on sausage egg McMuffin? @McDonalds

And folks are making some seriously gorgeous looking McMuffins, too:

Sausage and egg mcmuffin, handmade by me, that’s the way to start this beautiful day!! #StayAtHome everyone! #mcmuffin #sunnysunday pic.twitter.com/okmaZSu9Pz

Channeling my lifelong skills from when I worked @McDonalds to make a double sausage and egg #McMuffin for breakfast this morning #Lockdown #Quarantine #COVID2019 pic.twitter.com/KKA5cVqvib

People were excited because most of us love food.

McDonald’s have emailed me the recipe for their #McMuffin. Definitely going to give this a go at the weekend …. assuming I can get hold of muffins by then. pic.twitter.com/zI4JIfZDrd

Mcdoanlds felt bad and sent us how to make a sausage an egg mcmuffin with a hashbrown i can’t pic.twitter.com/r8ajhIkasW