Possibly more important to fans than the Super Bowl itself are the parties surrounding the Super Bowl. If you’re a football fan, whether your team has made the cut or not, you’re going to either host a party or be heading over to someone else’s, and stuff yourself full of mediocre food and mediocre beer. It’s just tradition.

And, naturally, Google has done its best to compile data on just what those traditions are made up of. 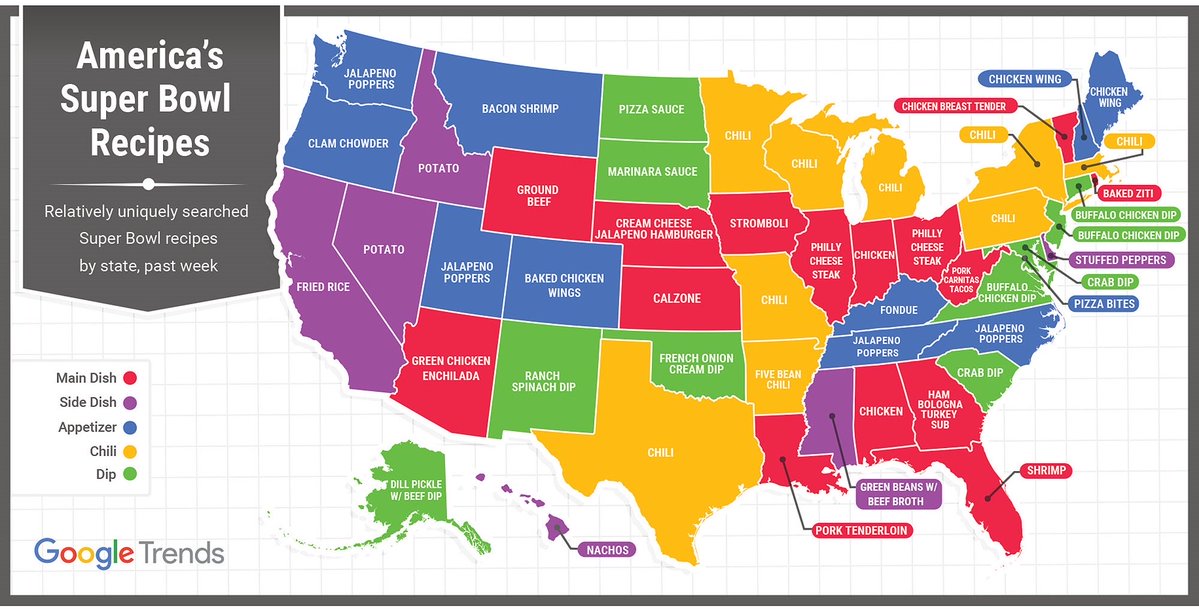 Specifically, they’ve released a map detailing which “relatively uniquely searched Super Bowl recipes” have originated from each state over the past week leading up to the game.

The map is even color-coded by whether the item is a main dish, side dish, appetizer, chili, or dip. For some reason.

When did “ground beef” become a main dish?
I know it’s Wyoming so ‍♂️but still.

Of course, the map quickly sparked a discussion, with many ready to poke fun at other states’ “weird” food choices.

Big ups to the psychopaths in the Dakotas who shovel pizza and marinara sauces directly into their mouth holes during the Super Bowl.

Wtf is this, MS pic.twitter.com/0NOOHIUxJ4

This makes me not want to visit the Dakotas since their popular snack is a pizza sauce….really? Their parties must suck

Some were frustrated with the responses for their own states, calling them inaccurate and absurd.

I call BS. I don’t know anyone here in Mississippi that eats green beans with beef broth. ‍♂️

Who the heck in Illinois is making Philly Cheese Steaks for the Super Bowl?

yeah. No one in Iowa eats Stromboli. idk where this is coming from

I’m in Indianapolis so if I just wanted to share my chicken ‘recipe’?

Others just had some questions and general complaints about…everything going on here.

2. How did clam chowder not make the list on any New England state, but ended up in Oregon?

3. How is Florida’s food not literally anything Cuban?

4. How does Philly Cheesesteak end up on Illinois and Ohio instead of Pennsylvania?

Whoever made this must’ve had the list of states, list of foods, then had a stroke and just threw them together.

It’s that time of year again,, where the family gathers around the table, creating new memories while sharing our favorite “pizza sauce”

But one man stepped up to be the hero Super Bowl fans across the country need, the hero Google Trends may not deserve.

More stories to get you ready for the Super Bowl: