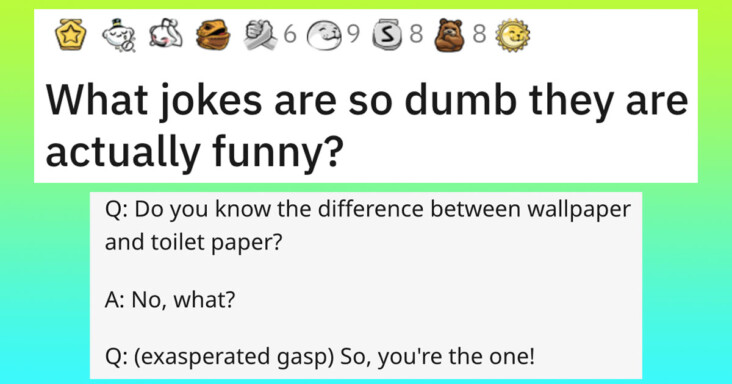 Sometimes the best jokes and the dumbest jokes. Not every jokes needs to be a belly-laughing knee slapper. Simple silly jokes that make you smirk or shake your head in half-disappointment and half amusement are just as important and the ones that will make you literally LOL.

Reddit popped off with their favorite dumb jokes when u/Quack_Quack_Quackers asked: “What jokes are so dumb they are actually funny?”

Enjoy the 25 best dumb jokes that are actually funny according to the people of Reddit.

“Know what my grandfather said to me, right before he kicked the bucket? “How far ya think I can kick this bucket?” –BigHeadSlunk

“Tell someone you have a joke and tell them to say knock knock. They say “Knock knock.” You say “Who’s there?” Confusion ensues.” –SexyNeanderthal

“Q: Do you know the difference between wallpaper and toilet paper?

Q: (exasperated gasp) So, you’re the one!” –leftcoastyinzer

“A priest, a pastor, and a rabbit entered a clinic to donate blood. The nurse asked what the rabbit´s blood type was, and the rabbit replied ¨I’m probably a Type O¨. –ImaDeadMeme4

“What’s orange and sounds like a parrot? A carrot.” –grombleduke

“How do you think the unthinkable? With an itheberg.” –waster_x

“I was at the funeral of a friend of mine. His wife asked me if I could say a quick word. I stood at the front , cleared my throat, choked back the tears, and said, ‘Plethora’. “Thank you,” his wife said as I sat back down. “That means a lot.” –reddicyoulous

“Why do divers fall off the boat backwards? Because if they fell forward they’d still be on the boat.” –CaptainPlummet

“A blind man walks into a bar. Then a chair, then a table.” –DamnSchwangyu

“Pirate walks into a bar, bartender says, hey man, you know you have a steering wheel hanging out of your pants? Pirate says, arr aye matey it’s drivin’ me nuts…” –Gutzonb