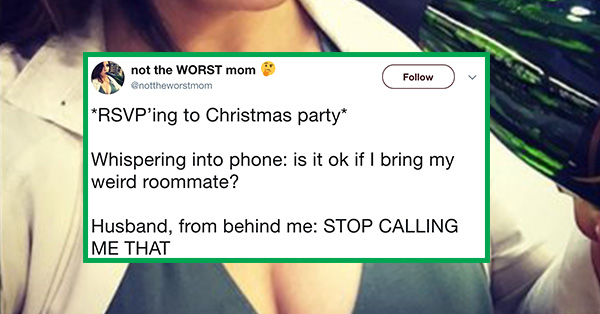 When you basically sign a contract that you and another person are going to live together and share your stuff for the rest of your life it’s kind of a big deal. Marriage is no easy task, it obviously has it’s ups and downs but there are way more real-life situations than anything when it comes to marriage. It’s not all romance and kisses, it’s a partnership as much as a relationship. There are hysterical little nuances to a relationship for the long haul and these folks do a great job at sharing some of them.

95% of any Home Depot trip is spent trying to find my husband again.

I feel like if I use my demon voice then it’s ok to interrupt the scary movie my husband is watching to ask him if he wants nachos.

I’m gonna need my husband to hurry up and finish his story so I can tell the same story but, like, a lot better.

H: why is the heat turned up so high in here?
Me: so I can sleep with a fan on.

A marriage built on respect and trust can survive anything. Except losing twice as much weight on a diet than your wife, apparently.

Protip: If your wife asks you “How lazy can you be?” it’s a rhetorical question.

My husband almost threw away a package of cookies because they were crumbled so now we have to go marriage counseling. I just hope it’s not too late.

Husband is currently mad at me because I can’t show him how to do something that I don’t even know how to do.

Husband: We should go to Costco.

Me [still in pajamas]: So I should change?

H: I said Costco, not Walmart.

I didn’t even know it was possible to argue about a topic you agree on until I got married.

*wife is out of town*

Do I dare leave the toilet seat up?

*looks around and shrugs*

Screw it. This is my house.

*falls into toilet at 3AM*

My wife and I are tackling a home improvement project together.

Just thought I’d give you a heads up.

This is my last post as a married man.

Me: *walking on the moon*

[text from wife]: Can you bring home some more milk?