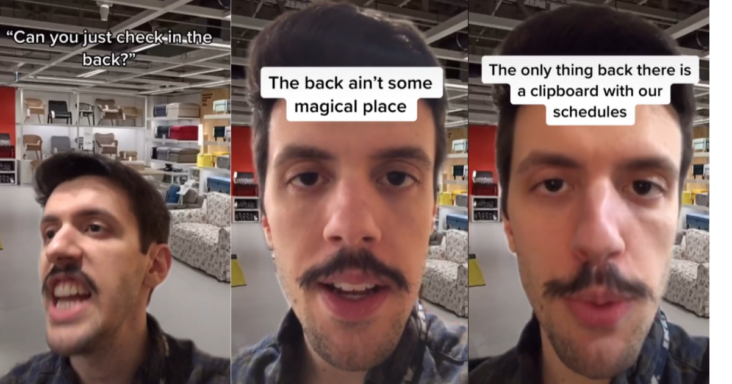 Lately, the internet has been getting a riot over accounts dragging all aspects of corporate culture, which is why comedian Scott Seiss’ retail series is going viral on TikTok.

The series began in February, when Seiss uploaded a video of what retail workers wish they could really say to customers. In this situation, Seiss responds to the infamous “You just lost yourself a customer” line.

He speaks for every retail employee when he says “I don’t give a sh*t.”

After the first video’s success, Seiss switched his TikTok strategy to appease his new fans.

As of this writing, Seiss has done 19 retail sketches, a few of them taking place in corporation behemoth, IKEA. He’s racked up 262K followers and many of his videos have cleared the million-view mark.

His next-highest performer addresses the myth that “the back” of every store has unlimited inventory. (It doesn’t.)

Anyone who has worked in retail knows “The Back” is not what customers think it is.

Magical it is not. Depressing? Yes.

If customers could really see what was in “The Back,” they would never ask that question again. There’s your free management tip for the day.

In this video, he calls out the bonkers logic of “Why don’t you open more registers?”

Not in practice, as Seiss explains bluntly in the video.

He actually has a decent suggestion, but one that probably wouldn’t go over well.

Maybe Seiss’ series will prompt an annoying customer to look deep inside and change their behavior. Probably not, but we can only hope.