On May 9, a man named Conor Arpwel tweeted a poll asking if people washed their legs when they took showers. The poll in the tweet still has four days left for people to vote, but already over a quarter of a million people have responded (and just over 80 percent of them are “yes”). People feel strongly about leg-washing, clearly. 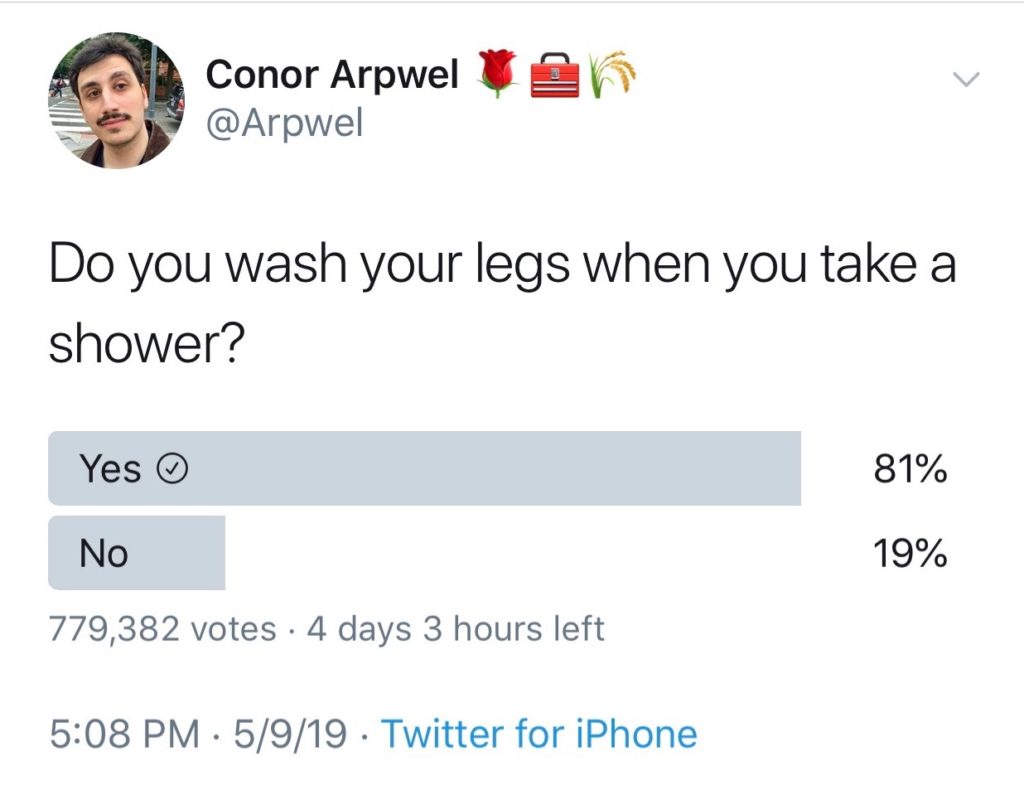 Who would have thought that a tweet about washing your legs would have gotten so much attention? Actually, scratch that—it totally makes sense that something having to do with personal hygiene and shower habits would be a hot-button issue on Twitter. Recently Twitter became heavily involved in a debate about the order in which people put on clothing each day, and that, too, became a highly debated topic.

This is also, if you watched the excellent TV show, You’re the Worst, something that came up in one of the earlier episodes and became a running joke later. Look, some people just don’t wash their legs in the shower. That may never have occurred to you, but it’s time to give it some thought.

Do you wash your legs when you take a shower?

Arpwel volunteered that he, himself, does wash his legs, but he’s just realized that many people don’t.

For the record, I do wash my legs but lots of people apparently don’t!

And the people who answered no explained why not. A lot said their legs just don’t get very dirty.

They’ve been safe inside my pants, the whole day. What’s the problem

People figured that if they washed their top halves, the soap sorta just ran down and did its job on the way to swirling down the drain.

I missed the debate yesterday but I feel like you don’t really need to wash your legs, you wash your top 3/4 and the soap and water runs down. Unless you’re just extraordinarily dirty for some reason,

Some people volunteered that they only showered once or twice a week, a position that received a lot of consternation.

i don’t like use soap on my whole body when i shower? and i don’t think i’m gross? i pretty much just wash my face and my armpits with soap. and i shower like once or twice a week lol. i think it’s fine.

One woman admitted that she’d probably shower more if she exercised more, but as it is, she’s not doing a whole lot of sweating.

i think this probably also has to do with the fact that i don’t exercise much. if i was sweating a lot i’d prob want to shower more. but you also don’t need soap to get off sweat! your body is fine without constant soap.

And another person said they thought it was bad for the skin to be over-washing areas that don’t produce sweat.

Another person included a bit of a clipping that actually says you don’t need to wash your legs!

I DO NOT (unless I’m shaving) AND I FEEL VINDICATED AND CONFIDENT THAT MY SKIN’S ESSENTIAL OILS ARE IN TACT pic.twitter.com/NcZbPZnas4

And then there are the forgetful showerers, who have no sort of real plan and just go through it in a daze.

But when it comes to the yeses, they are ADAMANT that it is crucial that legs be properly cleaned with soap and water (and possibly a sponge or washcloth of some type).

You should wash every part of yourself when you bathe/shower. That's on periodt. https://t.co/OaRm40IXVH pic.twitter.com/FcUssPx6sB

Some people were grossed out by the idea of people not washing their feet, but hey, no one said anything about not washing their FEET. That’s a whole ‘nother can of worms. Feet are stinky, they produce a lot of sweat, there are many reasons to wash your feet.

None of these posts are about skin conditions or medical advice. This is just people who don’t wash their legs and feet. Ever. That’s weird.

Twitter users just could not comprehend not washing their legs.

How do you skip your legs? pic.twitter.com/KBxmmt7100

gifting everyone in the no category one of these pic.twitter.com/IBLqIHI8Eb

I'm not gonna speak on the proper interval for bathing one's self. That can be variable on a personal level. But once you're IN the shower… why would u skip your legs??? If you wash your car, and skip the doors… did you really wash it?!

And, of course, many jokes were made.

The first question in the first democratic primary debate has to be “Do you wash your legs in the shower?”

The debate got so huge Arpwel became slightly overwhelmed.

Oh god. What have I done

Based on my research, there seems to be two primary theories of bathing: stink reduction and full coverage

So, which bathing camp are you?