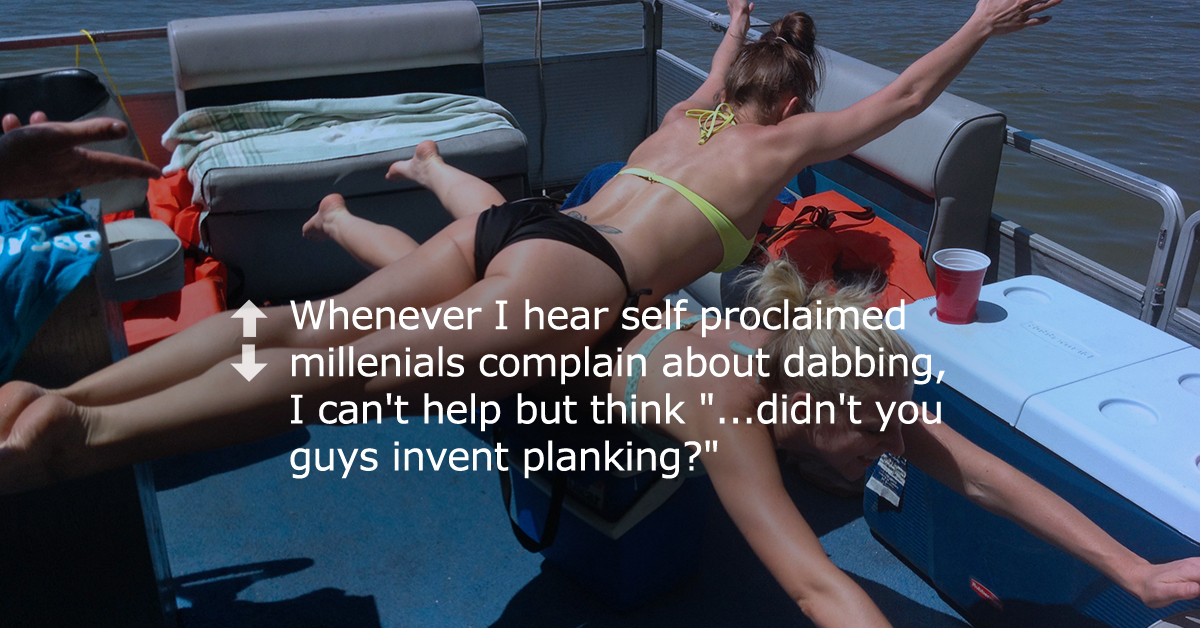 After the “ok, Boomer” trend, Millennials should have guessed they were next on the chopping block. The next generation—Gen-Z—is made up of teens and young twenty-somethings who have been apathetically watching the raging conflict between the older set, and they have a lot of good observations. Reddit user u/joe_internet asked on r/AskReddit, “Kids and teenagers of Reddit, what are some ways Millenials are already out of touch?”

Gen-Z had a lot of answers, because Millennials are very out of touch. That’s the thing about generations. You’re only at the center of things for a brief time, and then it’s the next group’s turn. Maybe we can do better than the Boomers and actually listen to the next generation—or at least not get incredibly angry about it. Below are some of the painfully accurate ways Millennials are disappointing the folks coming up behind us.

2. Hope For The Future

Well I’m an early gen Z and I was 9 or 10 by the time of the recession. Now I am almost done with college, and I grew up in the SF Bay area. People my age have a very bleak view of the world and the economy. They say the economy is booming now, yet there isn’t that hopeful feeling. I have taken coding classes in school, but there definitely is a problem if only one line of work pays enough for you to live in the same region you grew up in. I know I’ll probably never be able to afford a house in my hometown and every day I see despair on the streets. Idk, it’s the general vibe like, growing up knowing things won’t get better but that you can only make the most of whatever’s left. Millennials are disillusioned because the recession came just as they became adults, but they haven’t spent their entire adolescence knowing that there will be nothing left for them. Gen Z isn’t disillusioned, they have just never expected anything better. —notfromchicagoornyc

A friend of mine, who’s also a millennial, teaches a digital journalism in university. She said she’s astounded by how little the kids in her class actually know about technology, because they grew up with apps. Most millennials did too, but even if 2010 we still had to manipulate images and little things like that. She’s told me that many of them don’t know what a JPG is, or have any of the functional computer literacy that comes from having to know what’s under the hood. –anders9000

Bullying in schools. I don’t know how accurate those 90’s high school movies were, but they are very different that my school experience. I was born in 2004, and I’m in grade 10. So far, I’ve attended 4 different school, and none of them had any real bullying going on. Of course there was teasing and mean kids in younger grades, but that pretty much all stopped in grade 4. Even in high school, I’ve never seen anyone get bullied. The most violent act in my Canadian high school that I’ve seen so far was this mob of grade 12s that went and yelled at this kid for stealing a grade 9s shoes. That’s it. –HoodedHimalayan

I mean this could be just my opinion, but I think millenials are still trying to make change happen. Im gen z and kind of have just accepted how shitty everything is and how broken systems are. Everything is kind of a whatever and just go with it. I mean I would like to f Reform the US healthcare system but is it actually very going to happen, no). Most of the kids I go to school with have just accepted school shootings and shit and just don’t really care about when they happen now. Its just like well if I die being shot at school, whatever I guess. (I don’t know this is just my 2 cents) –supermuncher60

Man they already act so stuck up like boomers. ‘Anyone born after 199X is stupid’ and stuff like that. I once saw a 90s kid in YouTube comments unironically complain about how kids nowadays won’t understand the ‘pain’ of rolling up a car window with a handle instead of a button. Seriously. I call them 90s boomers. –epicjorts2095

Watching them slowly fall out of touch with technology.

My brother used to be the one I’d to go for help with any sort of electronics. Now he’s like my mom where he tries figuring it out on his own and he can’t and he gets frustrated and calls it stupid just because he can’t get it. He’s only gonna be thirty in December. –terminallyamused

Saying that they’re music is better than ours. I mean our music isn’t the greatest but I’d much rather listen to Blueface than the Black-Eyed Peas. We have good songs, and you have good songs. Saying our music is bad doesn’t make your’s any better. Another thing is that we don’t go outside. That’s a lie. My friends and I go to the park everyday after school where a bunch of other kids go as well. Millenials, Gen X, and Boomers are complaining about how back in their day everything was better. It wasn’t. It’s not your day anymore. You might have to accept that the 5 year old in the store has an iPad to play games. Times have changed. Stop complaining. You’re embarrassing yourself –mxrokii

Using “funny” memes with the specific intent to look cool with the younger generation. If you just like memes then that’s something different, but if you’re specifically doing it to look cool to young people then it’s sort of equivalent to Grandma mailing you Minion memes and saying “I thought you would find this funny dear. I don’t really understand it but I know you younger folk like this stuff.” –AmISteve