Family dynamics are really difficult to manage, especially when one of the people involved is no longer around to help mediate. In this story from r/AmItheA**hole u/MadeHerRepayTheDress, one of the main characters is no longer alive to try and heal a rift, but the OP is trying their best. There have just been some stumbling blocks.

He says he’s divorced and has a 16-year-old daughter, but he and his ex get along as co-parents. “One big rule we share is if our daughter breaks something, she pays for it,” he writes.

Well, his sister is getting married. His grandparents worked in a seamstry store until they retired. After the sister’s girlfriend proposed, the grandfather offered to make the fiancée a custom suit. Grandma then wanted to get in on the action and do something very special for her granddaughter. The OP says that their grandmother asked him to secretly record his sister describing her dream dress and then lo and behold, grandma made it!

“It fit perfectly and everyone cried,” he said.

But then grandma passed away, which is hitting the family hard. The dress has been a comfort to his sister, who felt she “would still be there” at the wedding. So this is where his daughter, C, comes in:

The issue comes in with C. She’s very large, much larger then Sis. Three days ago, we decided to go visit Sis and see how she was doing. It was great, but then C asked if she could try on the dress. Sis politely said no. C made a face, but dropped it.

Later, we decided to go grab dinner. Sis and I went to pick up our orders, but C decided to stay and play with Sis’s dog.

We got back, and the dress was destroyed. C had apparently tried to get it on, popping some seams, and got stuck. Instead of waiting for help, she cut her way out. The dress was hacked to bits.

The OP’s sister was devastated and asked them to leave. C got grounded and the OP contacted his Aunt, who took over the grandparent’s store, with some pics of the ruined dress to ask if it could be fixed. The Aunt said no, and offered to make a new one. But then she revealed this:

Gma had hand sewed most of the dress, used super expensive fabric, and put almost 500 hours in making that dress, since it was the only family wedding we’d have. In total, the dress cost 12,000 dollars, give or take.

Basically, it is irreplaceable. But the OP had a punishment in mind:

C has about 15,000 saved from various jobs, as well as winning writing competitions. This was supposed to help her in college.

I took her to the bank and set in motion transferring all the funds, since as her parent I still have control over it. $12k to Aunt to pay for the new dress. $3k to my sister’s wedding, as an emotional distress tax.

I explained exactly why this was happening to C, but she sobbed the entire time, asking what was she supposed to do for college and saying it wasnt her fault. I told her she could get a job if she didnt get a scholarship, and it was her fault for trying on the dress after she’d been told no, and for not waiting until we got back. A few popped seams could have been fixed. Hacking the dress to pieces couldnt.

C told my ex, and while she agreed C was in the wrong after the full story, said I shouldnt have “ruined her future” for a “free” dress. I reminded her of our rule, and she still thinks I’m wrong.

The OP wanted to know if they were wrong to do this. No one seemed to think so: 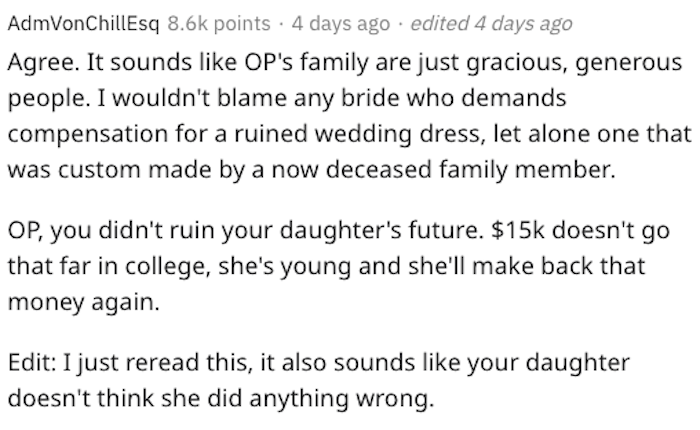 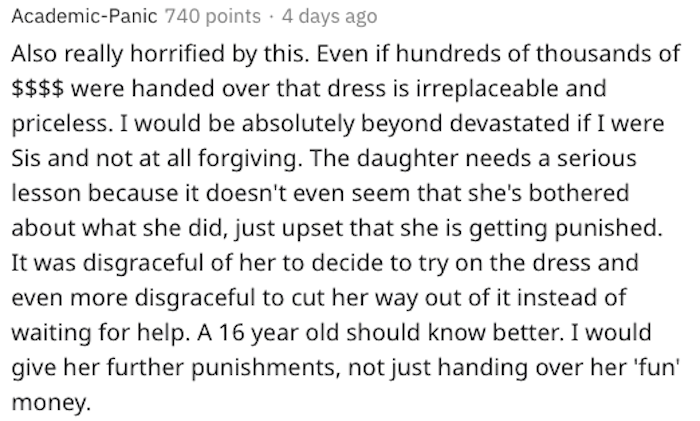 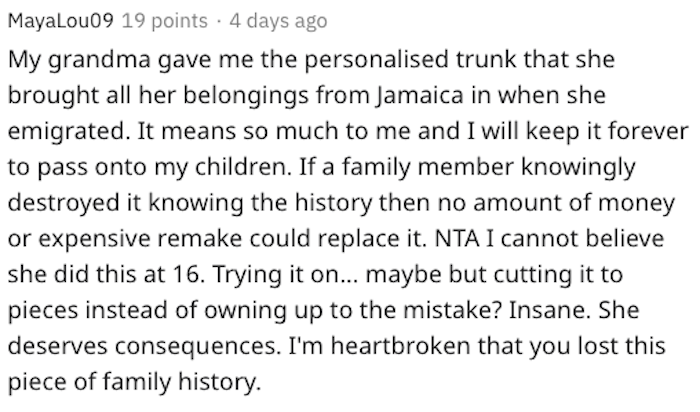 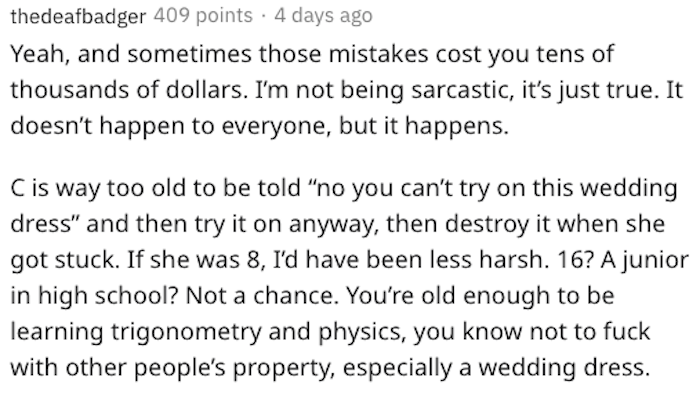 Now, since this story was posted, there have been some developments. First, they clarified that the 15k was extra money, and he and his ex would still be covering tuition. He also said that he mentioned C’s size because his sister has Crohn’s disease and is just very apparently smaller than his daughter. It’s not a judgment, just a fact.

But he did dig deeper into why his daughter did this and why it happened:

So, I got off the phone with my ex about 20 minutes ago. At some of your suggestions, I sent her the pictures, and she freaked. She apparently didnt believe me when I said it had be hacked apart, and believed it was just a few torn seams. She was pretty much on my side after. She told me that she’s spent the day badgering our daughter, asking her why she did what she did, and finally C cracked and said she was mad that Grandma wasnt alive to make her a dress, and that it was “unfair” my sister got a free beautiful dress as a reminder when my daughter got “nothing,” despite the many things she was given after the funeral. She tried it on, took it off when the seams popped, and then in anger hacked it apart. If she couldnt have a dress from Grandma, no one could. Her own words.

Honestly, knowing she did it on purpose has just made things worse. The fact that she could be so cruel, thats not the daughter we tried to raise. She will be going to therapy, whether that’s in person when local therapists start taking new clients again or on one of those apps people have mentioned. We need to talk about it more. Her punishment stands as is, though we’re going to see how therapy goes.

The OP has decided that he may return the money to C if after she goes to therapy for a few months as long as she makes amends, admits what she did is wrong, and his sister doesn’t end up in the hospital—apparently after this happened, she ended up having a Crohn’s flare-up.

“We’ll see what the next few months bring,” he concludes.