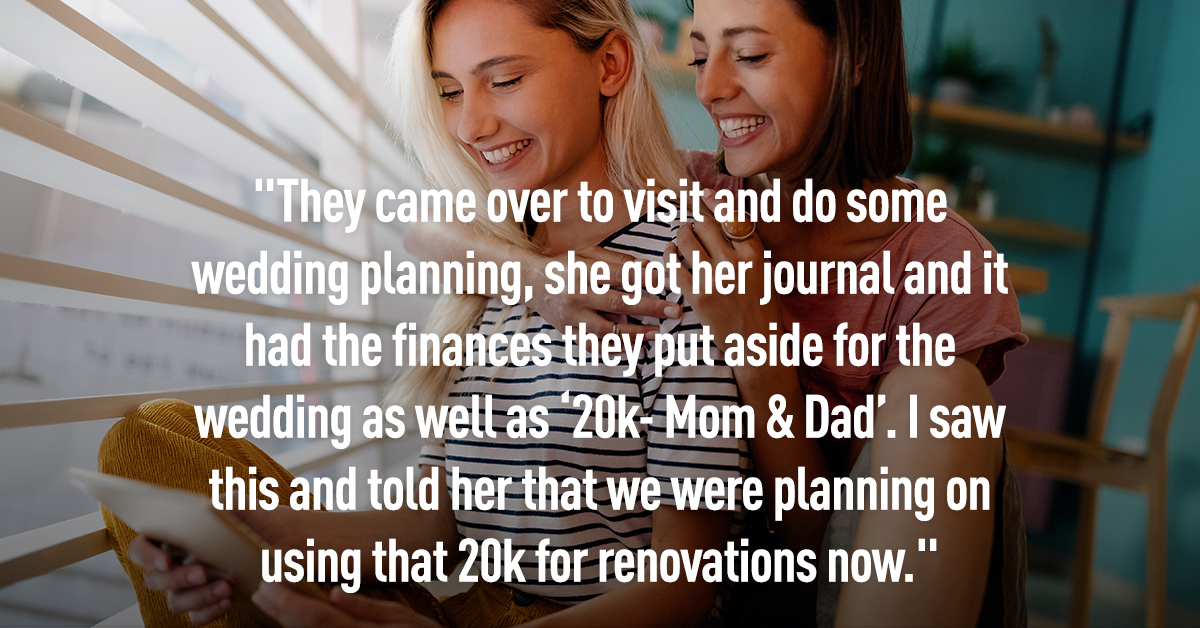 Wedding planning can be fun, but it can also be exceptionally stressful—especially if your family isn’t thrilled about your choice of a life partner.

But what if your parents promised to give you some money to help you fund your special day and then decided to withdraw that promise because you chose to marry someone of the same sex?

On Reddit, the mother of a bisexual bride asked if she was in the wrong for taking back the financial promise because her daughter wasn’t marrying a man—and she got a necessary earful.

“My husband and I started saving for my daughter’s (28) college fund since she was born, we both worked really hard for our money and we accumulated a lot for her. She ended up getting a scholarship to cover a lot of her college so we had about 20k left over, we offered to give to to her at the time and she said she’d rather we keep it for when she gets married and we agreed,” writes the OP.

The OP explains that four years ago, her daughter came out as bisexual and started dating a woman. However, because her parents never saw her as “the type” (WHAT DOES THAT MEAN), they were shocked.

“My husband and I were really upset because we loved the idea of her having a husband and a family, grandchildren for us. We thought it was just a phase, but 4 years later they are still together and they got engaged last month.”

Hmmm. Isn’t it fun when people talk about sexual identity as a phase? And also when they frame marriage as something that automatically means having children in the future?

The OP’s daughter and her partner came over to do wedding planning, and the OP saw that the 20k “promise” was marked in the book. Well, that was not going to fly.

“I saw this and told her that we were planning on using that 20k for renovations now. She questioned us and we were upfront and said we agreed for her to use that money under the assumption she was marrying a man. Her girlfriend got very upset and started calling us homophobic, and my daughter just sat there letting her go off at us.”

“Then my daughter said ‘that money was mine and I had it all planned out to use it towards the wedding’ well no it is our money that we saved with a specific use. She left in a huff and told us to never speak to her again. I think she is being very ungrateful but my other daughter has now turned on us as well and said we are terrible parents. I am not homophobic I respect same sex couples it is just not what I wanted for my daughter,” the OP says.

“You were willing to just straight up hand over the money to her, and she asked you to save it for her wedding. Then she found someone to marry, and now you are refusing to hand over the money because that person happens to be a woman. You are being unsupportive and homophobic. And it’s not even about the money, it’s about how you refusing to give the money clearly shows that you don’t consider her relationship valid or good enough. It shows that you think less of her because of her sexuality, and that’s horrible,” said Tomato_Tomat0.

“You love who you love, whether race, gender, whatever. Give the money. Let them have a wedding. You don’t have to attend if you don’t want to. The money was ear-marked for her wedding. This is her wedding. And who knows how many grand-babies your daughter and her partner will be having? You may have a happy future with a full house full of love and happiness ahead. Please reconsider,” advised NCKALA.

“It is an action that says ,’My gesture of love (gift of 20k) was dependent on you being my idea of what you should be instead of yourself.’ OP showed her 1000% that her love is conditional, and 1000% deserves the response to that that she’s getting. I hope she enjoys her home renovations more than her relationship with her daughter, because she’s going to be enjoying alone–this will probably cost her her relationships with both her daughters, as it should. Good on the sister for being actually supportive and loving and sticking up for her,” said AngrierThanISeem.

“To be clear, you aren’t obligated to pay for your daughter’s wedding. If you could no longer afford to contribute because your financial situation or priorities changed since the last time you discussed the money and its intended purpose, that would be understandable. But by your own admission, the only reason you aren’t following through is that you don’t approve of her same-gender partner. We have a word for that. It’s called homophobia,” velkana said.

“Give your daughter the money, educate yourself and look inwards about your need to control her and punish her for wanting to be happy over your archaic views on how your daughter should live HER life. It’s not too late to do the right thing,” suggested SmoochNo.

Well, the OP read the responses and got mad that people justly called her a homophobe.

However, she posted an update saying she has “rethought” her stance and “will be trying to be more understanding” of her daughter. I mean, good luck?