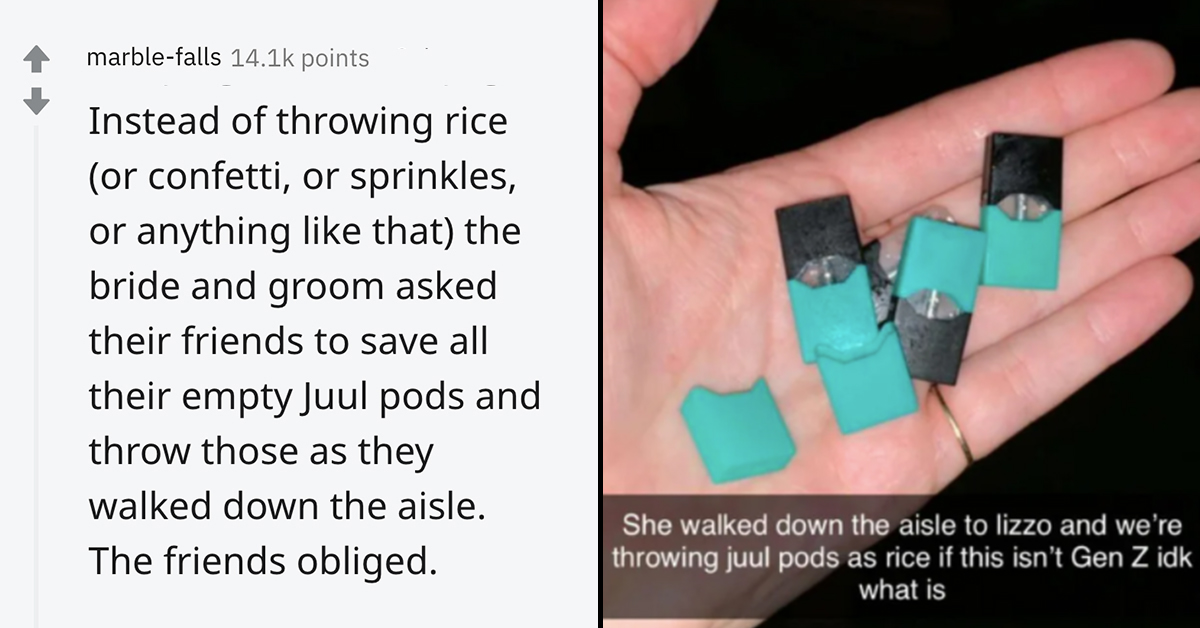 There are many cringy people in the world, and sometimes two cringey people are lucky enough to find each other and have a cringy wedding and a cringy marriage and a cringy house with cringy kids. They have cringy cars with cringy bumper stickers and they do cringy Karen stuff, like yell at service workers or call the cops on Black people for no reason.

But back to the cringy wedding. Sometimes these people are such a good fit, they stay together forever because nobody else is cringy enough to want to be with them. But most of the time, these cringy weddings end with vicious divorces.

Redditor u/ajlposh recently asked, “What’s the cringiest thing you’ve seen a bride and groom do for their wedding?” and the Reddit thread received over 78k upvotes and 21K comments because it turns out, there are lots and lots of cringy people out there.

Live, love, and laugh while you scroll through the cringy replies below:

My uncle not only brought up his daughters ex boyfriend in his speech but talked about their toxic relationship for a solid 5 minutes. I highly recommend preparing a speech before talking in front of a room full of people.—u/_Kyla_

Bride shows up almost 2 hours late to her own wedding. Southern California in an open field no water no shade. She shows up and wants to get married in her yoga outfit. the groom shut it down and when she refused to change her clothes the groom decided to leave her looking stupid and they never got married—u/toxictribe

At the reception line, after the church wedding ceremony:

The bride had a large bottle of her favorite perfume and sprayed each guest with it – female and male, whether they wanted it or not – as they entered the banquet hall.

Some guests complained that the smell of perfume was so strong that they lost their appetite and couldn’t partake of the banquet.—Back2Bach

They sang their vows to each other.

Neither had a singing voice.

Vows were generally bat shit crazy, like submissive in the bedroom, and not asking about where she was going.

The autotune microphones were a terrible idea.

Their vow songs shared a chorus and it was awful and they expected the guests to sing along with the chorus.

I wasn’t a guest, I was working the wedding. The bride got drunk and sat on some other dudes lap for two hours and flirted with him while the groom sat by himself at the head table with a defeated look on his face.—u/Samhamwitch

You know those slightly off-looking Mickey and Minnie mouses you see in NYC? Yeah, they showed up for the first dance because the bride loved Disney.

The entire room was forced to watch bride and groom dance alongside a deformed Mickey and Minnie, and halfway through they switched so the bride was dancing with Mickey and the groom with Minnie. I’ve never seen such a strange combination of stifled laughter and horrified stares.—u/ry1216

Ive worked over 200 weddings at the same venue, many couples wanted fireworks and we had a company that could always do a show. The couple ALWAYS, without fail, would pick Firework by Katy Perry to play during the show.—u/aPKPirate

The ceremony also was the “Name Reveal”. They changed their last name because they didn’t want to be stuck to their heritage and didn’t want anything to hold them back.

Turns out they changed their name thinking they could erase their mountains of debt or at least hide from it. Turns out you can’t live under two legal identities….—u/MKE_Links

Bride takes three hours to appear. After the ceremony, she and her spouse go up in an air balloon. The marriage did not last a year.—u/OphrysAlba