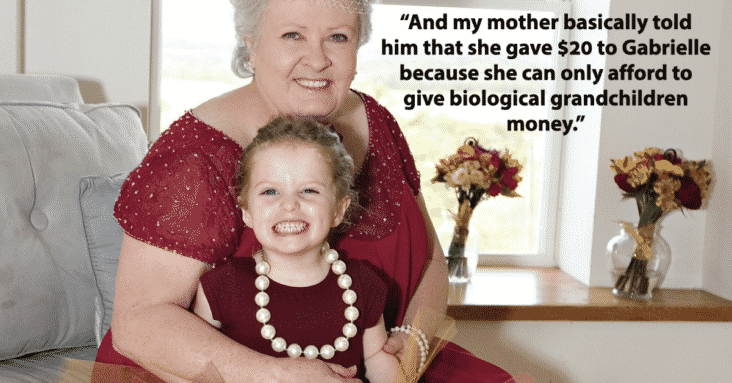 On Reddit, one woman is trying to figure out the best way to address a situation in which her mother treats her grandchildren differently based on who is adopted and who is not.

In particular, this grandmother seems to only think that biological children deserve gifts.

“I have 2 kids, a 9 year old son and a 7 year old daughter. My son is technically my stepson though. When I married my husband he had a 1 year old baby and I adopted him. My son’s bio mother has never been in the picture. We are very open about this with him. We have told him that I used to be his stepmom before I adopted him and answer any questions that he has about it,” the OP writes.

“My mother has always seemed to prefer my daughter over my son due to the fact that she is my biological child. Both of my children received Christmas cards from my mom. Gabrielle (my daughter) had $20 inside of her card. My son didn’t have any money in his. Logan (my son) asked me why there was no money in his card and I didn’t know how to explain it to him. So I took my own $20 and pretended to pick it up off of the floor. I told him that he must have dropped his money on the floor.”

A few days later, the OP’s kids were talking to their grandmother on Facetime. The OP’s son said, “thank you for the card and the $20, grandma.”

The OP says that her mother basically said she didn’t give him any money and that Gabrielle got money because “she can only afford to give biological grandchildren money.”

Logan was very confused by the whole thing, and the OP had to eventually tell him the truth about where the money came from.

The OP’s mother sure sounds like a piece of work. What should the OP do in this situation?

“I would have pointed out that If she couldn’t afford more than $20, each kid could have easily gotten $10 and said until she learns basic math and some common decency she wouldn’t be seeing either of her grandkids ever again. OP isn’t the asshole for lying but they definitely will be if they allow that woman to continue to treat her son so poorly,” said Ellendyra.

“A soft YTA. I totally get why you did that. I’m not so much judging you on the fact you lied about the $20 but it sounds like you didn’t even stand up for your son. You need to talk to your mom that this is unacceptable. You can’t make her love him but she can at least treat your child with decency. Tell her either send them the same amount or nothing at all,” advised 14793759308.

“NTA – this is a super easy fix. No more presents from grandma. If they come return them to sender. If the kids ask say ‘in our house everyone is treated equally and grandma is not playing by our family rules’. Tell them story from this year next year and use it as a lesson in fairness. Grandma can either respect your family or not. It’s completely up to her. No need to get upset saying it calmly and matter of fact like and they will accept it because you set the tone for your family. Promise not to lie to him again say sorry and drop it and then distract them with candy or drugs,” said Daynighty.

“NTA and YTA. NTA: I don’t think lying to your son in that moment was as bad as other people think. Realistically I have no idea what I’d have done in your situation and you had to think fast. You were trying to protect him. YTA: Your mother is a toxic piece of trash and you need to protect your child. You say he’s ‘technically’ your stepson. Um, no. He’s ‘technically’ your son. You adopted him. He is your son just as much as your daughter is your daughter. Your parents are being outright abusive and *you are letting them.* You need to step up to the plate and protect your child. Tell your horrible parents they cannot see either of your kids for now until you decide it’s safe for them. The abusive favoritism is damaging to your daughter as well – ‘love’ that is bestowed conditionally is not better when you meet the conditions; instead, you are always worried you’ll lose the love too. Plus, she has to be bothered by the way your parents are acting toward her brother. You need to model the appropriate behavior to your kids and you need to protect them,” said toughdog18.