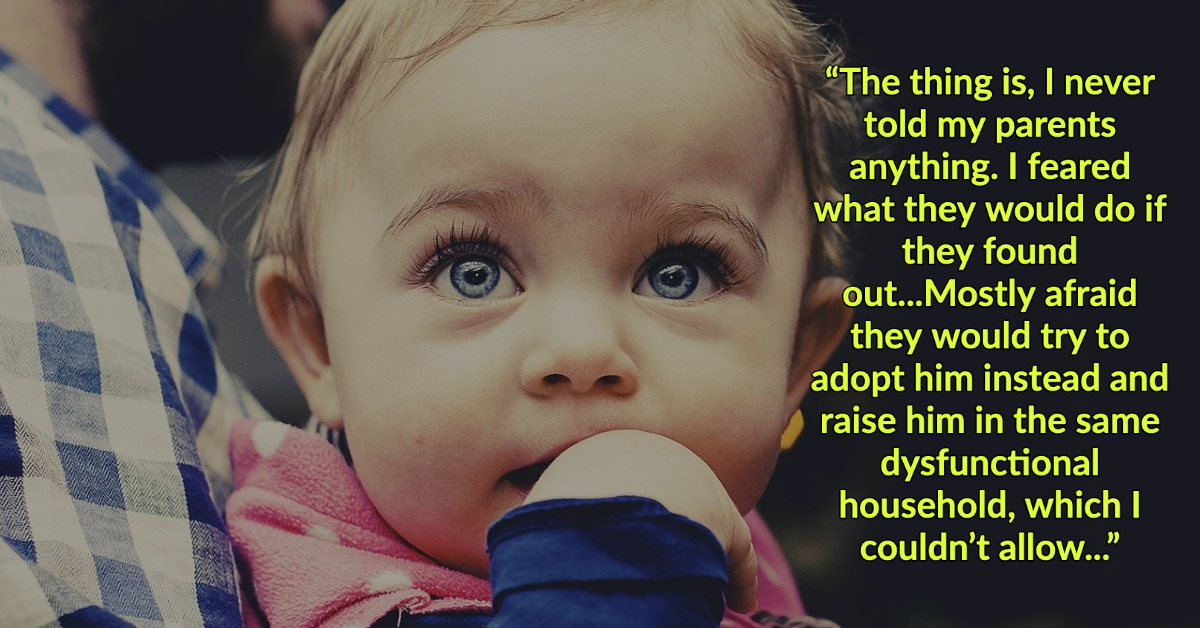 When you have children, your instinct is to hopefully want to protect them from any toxicity and negativity in their lives that you can. And sometimes, that toxicity comes from your very own family.

In a Reddit post, one user explains that after he broke away from his family due to their controlling ways, he fathered a child that he decided to put up for adoption in order to give the child a better life.

Many years later, and after reconciling with his parents, he’s wondering if he made the right choice. Based on his parents’ reaction, it sounds like he did.

“My parents were very cold, strict, and controlling people almost my entire life. Very religious and always cared about how the rest of their church viewed them so they were even harder on me to always be ‘perfect.’ I was out of the house at 18. I didn’t have any money since my parents never let me work so I lived with friends,” the OP writes.

“My girlfriend and I were only 19 when she got pregnant. Neither of us with a place of our own, no money. We weren’t at all prepared to be parents. Despite trying to break away from our parents strict religious views, we still felt guilt about considering abortion (I’m completely pro-choice btw but personally we couldn’t bring ourselves to do it) and looked into adoption instead. We went through the process and our son was adopted by a nice enough couple.”

“It hurt for a long time but we eventually moved on with our lives. The thing is, I never told my parents anything. I feared what they would do if they found out. Yes, at that age I still feared them. Mostly afraid they would try to adopt him instead and raise him in the same dysfunctional household, which I couldn’t allow knowing how they’d be.”

The OP explains that they were not in contact with his parents when the pregnancy and adoption happened, and didn’t speak for 15 years. Recently, the OP’s father had a heart attack, and the OP reached out. He says they both wanted to repair the relationship and that his parents are trying to be more open and loving.

“Now when my bio son was adopted, we agreed he was free to contact us once he was older and that’s exactly what he did when he was 19. ‘Ben’ has been in my life for almost 2 years and it’s been such a blessing getting to know the wonderful man he grew up to be. Ben has expressed interest in meeting my parents as he’s already met my ex’s parents. He knows the whole story about them and that they don’t know about him at all. He’s fine if I don’t want them to know, but I decided it was time anyways and decided to speak with them.”

“Boy was it a major disaster. My mom was so upset she was almost in tears and my dad wouldn’t even look at me. They acted like I was a monster for never telling them they had a grandchild out in the world and also angry at the fact that I ‘gave him away’ when they would’ve given him a home.

While the OP’s family believes he was right to put his son up for adoption, they ultimately feel he should have told his parents what was happening and that they had a grandchild. Now, the OP wonders if his choice was wrong. Redditors are inclined to believe that he made the right choice and acted in a way that protected his child.

“NTA. You went no contact for years for a reason. They probably wouldn’t have raised that boy any better than they raised you. Letting them know they had a grandchild would’ve probably caused a shit show, you kept that out and let you and your son have semi-normal and healthy lives,” said ThrowRA_Cottage.

“You did the right thing for your son. It was the best option for him. You gave him a life out of that toxic environment. You have confirmation now that they would have tried to adopt him themselves… That should be enough to reassure yourself that you did right for your child,” agreed ChiisaiHobbit.

“NTA. I grew up in a fundamentalist cult. I never would have wanted my own child to be raised in that environment. When you are extremely sheltered, manipulated, controlled, and terrified by your parents, it is very difficult to make adult decisions. You were extremely young at the time. You did what you thought was best for your son, and gave him a good life. You arguably made the best decision you possibly could’ve made for him. Hindsight is 20/20, and maybe you should have told your parents. But your reasons for not telling them are valid. I remember very well how easily I caved to my parents’ whims, despite trying to stand up for myself. What if they had hounded you day after day after day. Would you have been able to maintain your resolve, and give ‘Ben’ up for adoption? They would’ve placed an insane amount of guilt on you. I know that if it were me I would never want a child raised in that environment, but the pressure from my own parents would have been insane. Your parents are mad now, but they would have been mad for the last 19 years if you told them. With the knowledge that you have now, you might question if you should have told your parents about your decision. I don’t think there is an easy answer for that, but you did it from a sense of self preservation – not to hurt them or to be spiteful,” said Gnomer81.

“You and your ex gf made the best choice for him. I am close to your parents’ age and a Christian. It sounds like maybe your parents got so bogged down in trying to ‘look like’ a Christian family that they forgot to act like Christ. If you and your girlfriend had felt safe coming to them for help and advice they would have known about your son. Tell your extended family to kindly butt out; if you didn’t feel that you could go to them 20 years ago you certainly don’t need their advice now. Tell your parents that you made the best decision for your child years ago and that you plan to enjoy whatever relationship you can have with him now. Tell them that they need to pray about whether they want to be a part of that or not; but that that is dependent on them casting aside blame and offering and accepting forgiveness,” advised nannylive.

“I’m an adoptee and I am really happy to hear that you and your son have made contact and are establishing a relationship. As you had no contact with your parents at the time of his birth, it would be utterly unreasonable for anyone to expect you to have to contacted your parent about the pregnancy and birth. Unless they would have supported you emotionally and financially to keep the family together (seems highly unlikely) then adding them to the mix would just have made everything worse for you all. Good luck with your relationship with your son,” said Polhillian.

Sounds like the OP made the right decision. What do you think?