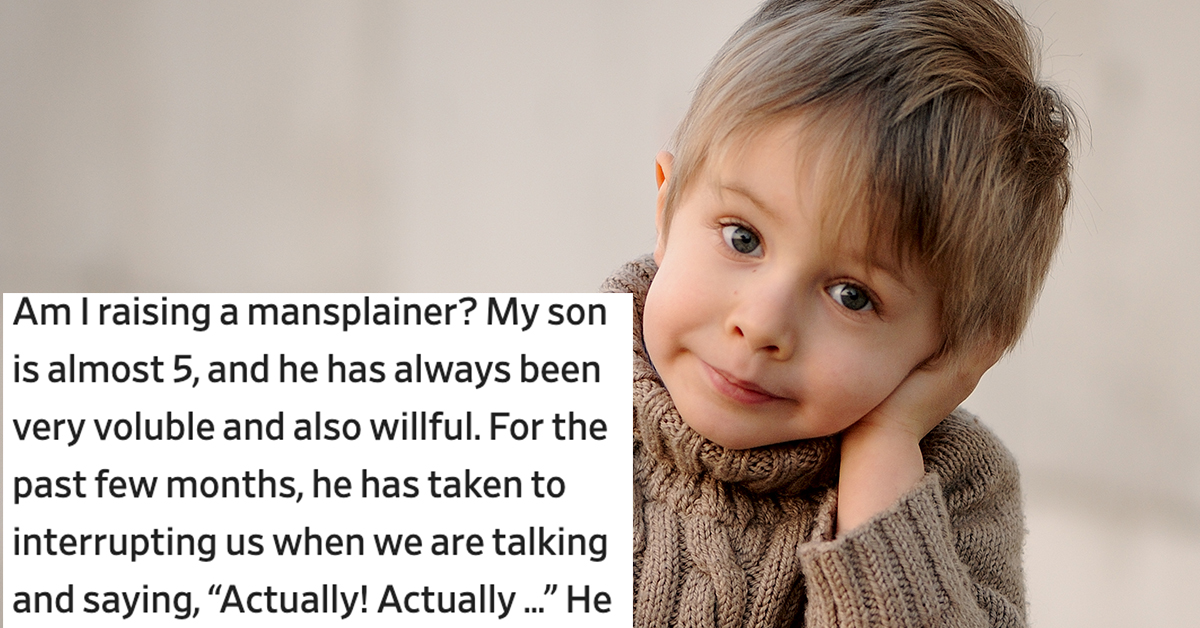 First-time parents worry about a lot of stuff and that’s totally understandable. It can just be funny to other parents who have already been through it and know there’s probably nothing to worry about. This poor mom who wrote into Emily Gould of Slate about her four-year-old son got a little worse than mocked. People seem to actually be kind of mad at her for her question!

“Am I raising a mansplainer?” she asked. She goes on to describe her son as having always been “very voluble and also willful.”

She says he has developed the habit of interrupting her and his father by saying, “Actually! Actually …” which is definitely the calling card of the mansplainer. But can a four-year-old really be called a man? The way she continues to describe the issue is also a bit strange:

It occurs when we are explaining things to him, and of course he is always really wrong, because he is 4 and these are often topics that we have a Ph.D. in. It also occurs nearly every time my spouse is telling him a story, because he thinks the story should go a different way. We are trying to work on the interruptions, and I’ve tried telling him to ask questions about his understanding instead of saying “actually,” but he still does it.

She goes on to say her husband isn’t worried and thinks he will grow out of it, but this is their only kid and she is worried he will become “permanently insufferable.” She adds that he has trouble with impulsivity, emotional control and paying attention, which again sounds like most kids that age. But he hasn’t been diagnosed with any health issues. She ends by asking what to do.

Gould is very nice to this woman, who is clearly aggravated by an annoying kid. While every kid is different, Gould writes that the mom finds it reassuring to know her own kid went through a similar phase and grew out of it.

Was it because we made it clear to him how much his “actually”-ing annoyed us, or did he just get over the thrill of ad-libbing longwinded, patently wrong explanations? We’ll never know. The only thing that’s certain is that you don’t have to worry (yet!) about raising a ’splainer. Maybe you can reframe some of these interactions as opportunities to give your son a receptive audience for his cockamamie theories, at least some of the time.

She suggests the mom try to reframe some of these obnoxious interruptions as “practicing his storytelling.” And that it’s okay to still be annoyed sometimes and ask him to stop.

This seems like a fair answer, though I am really curious what these parents have PhDs in that they keep talking to their toddler about. Other people were far less sympathetic in the comments on Facebook: 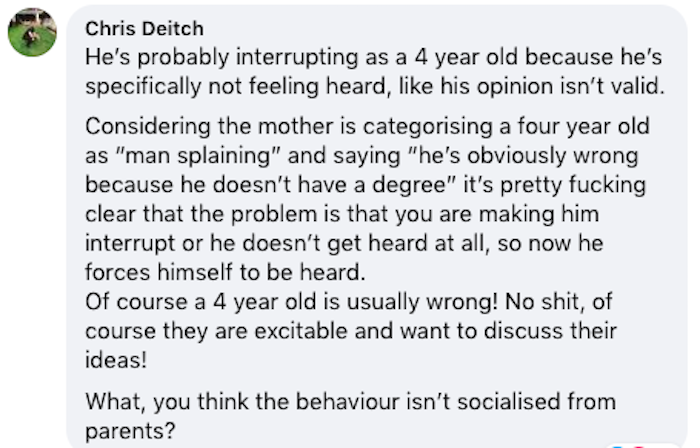 Okay, we get it, all kids can be annoying as hell. Just like mansplainers.