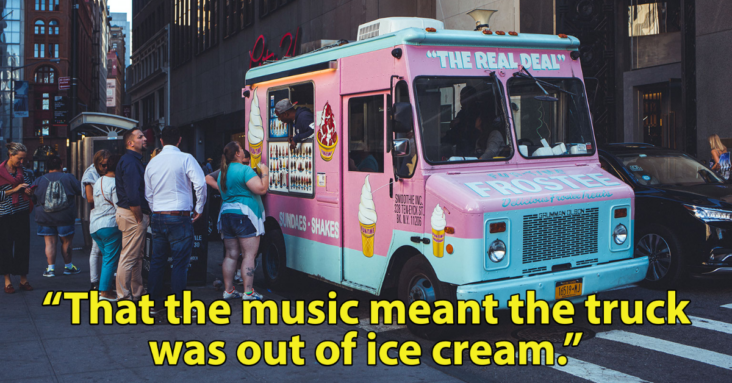 Sometimes, our parents lie to us. They might have good intentions or are trying to keep some childhood magic alive (see: Santa Claus). Maybe they’re exhausted and can’t go through another sound of “why.” But they also might just be gaslighting or manipulating their own kids.

On Reddit, people are sharing the most ridiculous lies their parents told them as kids.

And you know what? Elmo might annoy me sometimes, but I would never tell my kid that his furry, red friend had exited this mortal realm.

“My dad got fed up of watching Barney the dinosaur when I was a kid, and one day when I asked to watch it, he said:

“That my siblings and I had a sister named Alice. Apparently she wouldn’t stop talking in the car so they dropped her off on the side of the road.. never spoke on road trips ever again.” — jaykayhicks

“Not too f**ked up, but ridiculous. When I was little, my mom told me if I didn’t finish my dinner my stomach would get very hungry and come up and eat my brain. A few nights later I woke her up at midnight crying because my stomach growled and I needed a second dinner or it would eat my brain.” – DragonStangFlyer122

“When I was a kid my father told me about ‘the can.’ He said it contained a family secret of incredible value, and that when I turned 18 I could see it. On my 18th birthday I asked my father about the can, he said ‘the f*ck is the can?’ and after I reminded him of it, he burst out laughing, saying that he was f*cking with me. For almost a decade I believed that I would be privy to some cosmic secret on my 18th birthday, turns out I’m just very impressionable.” — chrismamo1

“I lived with my grandma until I was 16. My mom is currently telling me that never happened and she never left me with grandma. I guess I imagined my entire childhood.” — narcolepticadicts

“That if I didn’t brush my teeth, tiny teeth goblins would sneak into my room at night and pull out my teeth while I slept. I was genuinely afraid of the teeth goblins.” — tomorrowistomato

“Around the time Toy Story first came out, my dad drove an Infiniti and he told us that he could press a button and go ‘to infinity and beyond’ to jump over other cars. He’d have us close our eyes and press the button and he’d speed up and pass the car in front of us while our eyes were closed. As a kid I was d u m b f o u n d e d and thought he was magic. It’s actually a nice memory compared to the other ones on here lol.” — nopenonotatall

“My dad told us, my brother and I, that he could tell what card we were holding just by looking at the back of it. So we would hold up a card from the deck, we would hide it from him, we got creative, trying to trick him and he would still be able to tell us which card it was! I remember spending hours with my brother and a magnifier trying to figure out how he could tell which card we were holding up. In my 30s my mother finally admitted that she was always standing behind us and telling him! We had no idea she would betray us. It’s one of the good memories of him thankfully, there’s a lot of bad ones but that one always makes me smile.” — Abby_Babby

“That my eyes turn orange when I lie. So I covered my eyes when I lied so my mom couldn’t see them turn f*cking orange.” — NoseyRosey40

“My dad would say, ‘I’m going to ask you a question, but keep in mind, I already know the answer.’ It worked; my child mind freaked out knowing there was a 50/50 shot and if I guessed wrong I’d be grounded from the tv, lol. The panicked silence told him all he needed to know.” — propernice