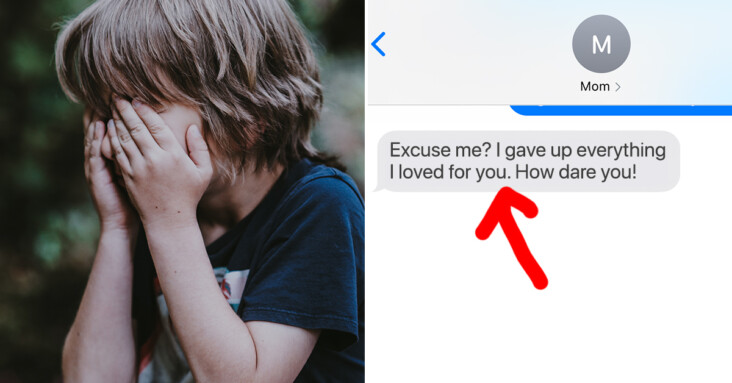 A very sad fact of life is there are a lot of people who are not suited to being parents who become them. Some are unhappy with parenting, some take that unhappiness out on their kids, and some of them are totally abusive.

If we want to be very generous, we can say that maybe some of them don’t realize the ways they’re harming their kids. In that case, this thread on Reddit started by user u/Few_Reading_4822 might be something for all parents to read.

The Redditor asked, “What is the most toxic thing a parent can say to a child?”

A lot of the replies are really painful to read, as people shared specific stories of abusive and neglectful parenting.

And many of the responses were much more general, and could be a way of speaking to or reacting to a kid that a parent may not realize has long-term repercussions to their sense of self-worth and ability to become functional adults themselves. Maybe even parents someday.

Here are some of the responses that will give any parent something to think about:

In my experience, divorced parents that say stuff like :

It really screws with the kid’s head. If you’re ever going through a divorce and have children, please find a way to sort your shit with your former spouse without involving your children more than necessary. —Loa_Ex_Machina

My dad was kicked out at 13. They started to throw that in my face as a threat to kick me out when I was 9. Theyd start counting down the years, and by the time I was 11, saying theyd do it earlier —SleepyBunny22

“So you’re saying that I’m a bad parent” in response to any form of help-seeking of constructive criticism was the worst for me. —Derpchieftain

Constantly comparing you with your older siblings, and extremely different treatment. It makes you feel inferior to them and like no matter how much you try or do, it will never be enough. —mo95z

I gave up everything I liked for you

why can’t you be like so and so’s child, they do <one impressive thing>

Over and over again for years and years. Any accomplishment any trial passed any challenge won

I’m going to throw myself off a building, you all hate me anyway.’

And a hundred variations of that. —Mister_J_Seinfeld

Talk shit about the other parent then compare you to them. “You’re just like your father!” —nbryan88

It may not be as harsh as other things stated but the dreaded ‘It’s all in your head/you are just imagining it.” As it turned out I wasn’t imagining it and now I struggle to differentiate what’s real and what’s not because I was led to believe I thought I was imagining things constantly. —Missing_Maestos

Life would be better without you. You are the reason for our misery. —Celovec197408