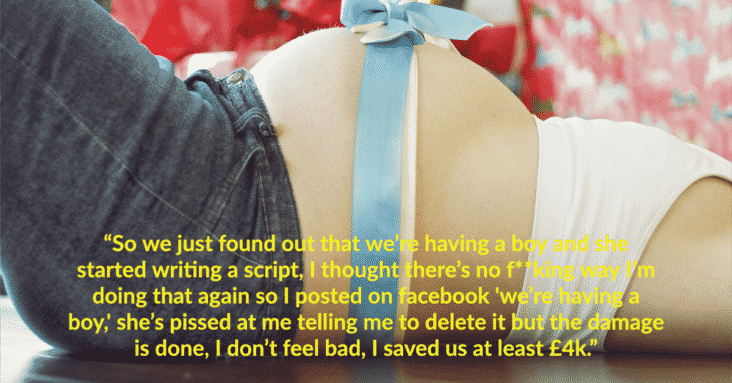 Look, gender reveal parties are idiotic. I’ve been to them, and I don’t understand. Throw a big party for literally any other reason that discovering the sex of your child.

I’m not saying it isn’t fun to learn if you’re having a boy or a girl, but I find the increasing hoopla around that discovery very strange.

He and his wife just discovered the sex of their second child, and after what ended up being a very expensive gender reveal for their first child, he just let the cat out of the bag on Facebook. Without consulting her. Which is really selfish and mean.

“Myself (27M) and my wife (27F) are having a boy, we already have a girl who is now 2. My wife is really into films, Oscar type films and she is like an analyser when watching them so she wanted to make a gender reveal short film, 10 minutes long to say we’re having a girl, kind of weird but I went along with it, we posted it and she was super happy with it but it cost so much, she hired expensive cameras, we drove out to scenic areas for the right shot, I’m working full time during this process, exhausting.”

“So we just found out that we’re having a boy and she started writing a script, I thought there’s no f**king way I’m doing that again so I posted on facebook ‘we’re having a boy,’ she’s pissed at me telling me to delete it but the damage is done, I don’t feel bad, I saved us at least £4k [$5,500 in American dollars]. What I don’t get it why she’s just making films about gender reveals, she can write a script about anything and not be on a strict ~6-7 month time limit.”

Yikes. Yeah, he saved money, but he also totally blind-sided his wife—which is very unkind.

“NTA – Maybe not a popular opinion, but $4k is ridiculous and so are gender reveals in general. Edit: A lot of people are assuming I don’t think he should’ve talked to his wife about it first. Obviously he should have. But is he the asshole for putting a stop to something expensive and stupid? No. After they talked about it, the project should’ve either been cancelled or had the budget brought way down to something even remotely reasonable. For anyone saying he should’ve supported her hobby…lmao. If anyone is wasting that much money on a hobby (this isn’t a hobby, it’s a stupid gender reveal video), they need someone to give them a reality check, not enable them. He supported her the first time, but clearly they couldn’t afford this waste of money for a second time, or he wouldn’t have gone to this length to keep her from wasting that money again. It sounds like he would’ve been expected to help pay for, and spend time making, something he didn’t want anything to do with. Just because you say something is a hobby doesn’t mean you get to spend an absurd amount of other people’s money and time on it, and then force people who likely don’t care at all to witness your narcissistic ‘hobby’ (gender reveal video),” said besupergood.

“Why does OP get a pass for taking it upon himself to announce this on FB without even talking to his wife first? The adult thing to do would have been to, you know, talk to her and explain that he didn’t think it was worth such a huge monetary investment, maybe even brainstorm some cheaper cute ways to announce it. I would be furious if my husband just slapped something like this up on FB knowing that it was important to me,” explained bendingspoonss.

“ESH. 4,000 dollars could’ve gone into a saving account for the kid’s future, instead she wants to make a video announcing what genitals the baby has. That’s ridiculous, but communicating is kinda super important in relationships,” said helen790.

“I don’t agree with this reasoning, and I don’t understand the focus on the reason behind the decision to make the video. ‘My wife is really into films, oscar type films and she is like an analyser when watching them so she wanted to make a gender reveal short film.’ Notice how the wife’s interests directly drive the reason she wants to create the video? It sounds like she has a blast writing, directing, and performing these activities and I don’t understand why that would be a bad thing. You shouldn’t dismiss someone’s interests just because you disagree with the subject. The wife has an interest and passion for creating and performing and she found an opportunity surrounding an exciting event in her life. Furthermore, she creates a long-lasting*, meaningful piece of performative art that she gets to reflect fondly upon and create memories with. If the husband has an issue with the time requirement, or the cost, he can bring those up with his Wife and they can compromise. His approach robbed her of the opportunity to do something she was excited of, and it is* absolutely an asshole move,” suggested KumaHarlei.

“Was leaning towards E S H but settling on YTA. Yes, that’s a ridiculously stupid amount of money to be paying for a gender reveal video (which is where my initial assessment came from), but you still should have spoken with your wife about it instead of going rogue like you did. When I get really excited about something, especially something revolving around a milestone or big news/event, I get really sad when whatever “it” is gets ruined or doesn’t go as planned. Throw in pregnancy hormones and I’m sure your wife was pretty damn upset. This may not have meant anything to you, but you know damn well it meant something to her so its a pretty big dick move to just throw it on FB so carelessly. You prioritized your own feelings over your wife’s without so much as a conversation, or an attempt to compromise. You took a moment away from her that she will never be able to get back (announcing the gender). What you did was hurtful and selfish no matter how silly or ridiculous her plan may have been. You’re definitely TA here,” said midnitemuzing.

What do you think the OP should have done here?