Gender reveal parties have become a heteronormative plague on this nation, causing massive fires, explosions, and other catastrophes as people try to outdo each other when announcing the biological sex of their kids. these are people who have never heard that gender is a construct, or more likely, who refuse the idea that the gender a kid is assigned at birth might not be correct. And if you try to argue with them, they’ll shoot a gun full of blue powder right in your face.

This story from the subreddit r/AmItheA**hole has been removed by the moderators for being inflammatory, but the comments remain and the bulk of the tale was captured by Someecards before it was deleted. Basically a guy going under the handle u/Traditional-Flower writes that he was invited to a gender reveal party by some co-workers, and it didn’t turn out the way he expected:

I (30 M) drive 45 minutes outside of the city to go to my workmates gender reveal party. In the first place, I find this to be an obnoxious new fad, but I try to be a good sport for the sake of my work relationship. I dress up. I bring a gift. I bring a bottle of wine for the party. I am trying.

He tried, but he didn’t like how hard the couple was trying…to make a point about gender reveal parties:

After much buildup, the couple stand in front of this box-thing with the gender reveal hidden inside. They pull a string, the box falls apart, confetti, streamers etc. and there reads a message “Unassigned!”.

That’s right. He says no gender was revealed at THIS gender reveal party. And the OP was pissed:

There are audible groans. A few woke claps. They launch into a polemic about gender and their decision not to assign their child a gender, and I begin loudly, playfully booing. No one joins in. A few people pull me aside later in the night to lecture me, others to thank me.

But he says he isn’t sure if it was cool to boo his friends’ feelings about their baby, for some reason:

Now, I don’t begrudge them raising their child however they want, and I don’t have anything against trans people. But I thought bringing us so far out of our way, under the already lame pretense of a gender reveal, and then using it as an opportunity to posture and preach was lame, insincere and a**hole-ish in the extreme.

Okay, the fact that this person’s Reddit name has the words “traditional flower” in it makes me skeptical that they don’t have a problem with the message behind the couple’s party and are only mad about the medium. Especially the way he mocked the idea of “woke claps” and claimed people thanked him for booing. That’s a lot to believe.

On the other hand, yeah, I’d be annoyed if I attended yet another baby-centric event and got a lecture instead of an open bar. Isn’t the shower enough? Most people seem to agree with that, at least, saying this was a real bait and switch situation, or even another gift grab grift. Commenter Gorgo_xx wrote:

NTA. Don’t invite people to a gift-grab party and then to preach at them.

It’s a terrible bait and switch, on the same level as inviting someone to a party so that you can pitch them some MLM shite.

But a lot of people just said what is probably most true about this scenario: it’s fake! And a scenario that has been posted in FB groups and on Tumblr about parenting. People pointed to the fact that this guy claims to be liberal, but his post is full of veiled bigotry about “wokeness.”

Like me, commenters noted that the OP’s claim he received thanks from other guests is a classic move from the troll world. Most relevant, the kind of people who don’t want to raise children with gender are unlikely to make a huge deal about a gender reveal party, even to make a point. If they’re really that extreme in their beliefs, their friends would probably know all about it already, don’t you think? 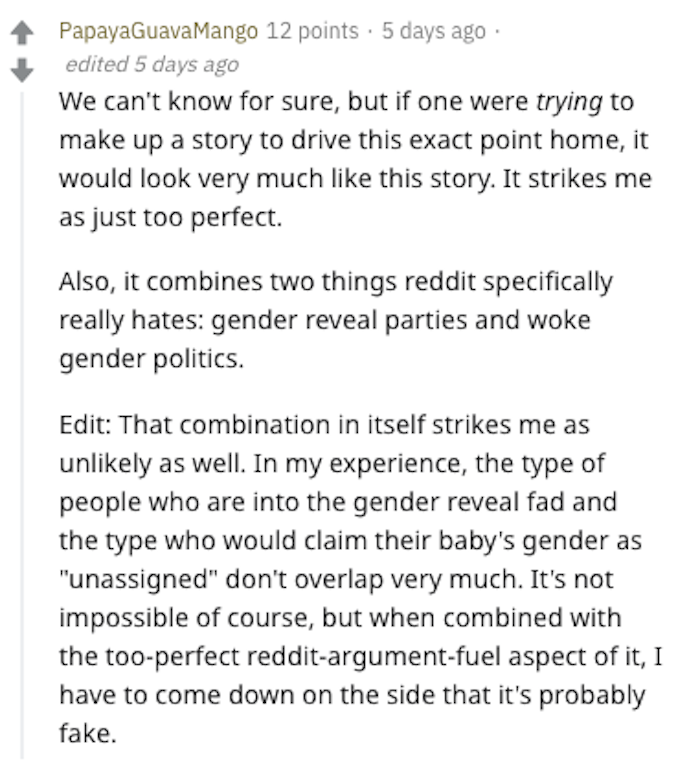 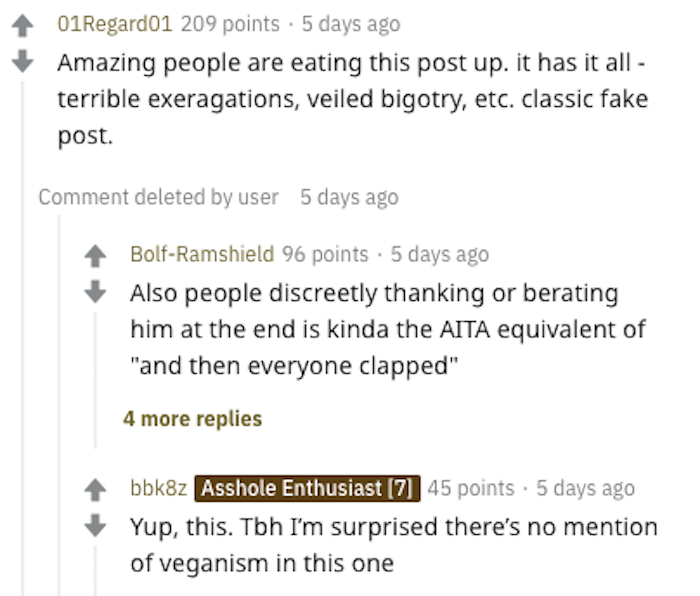 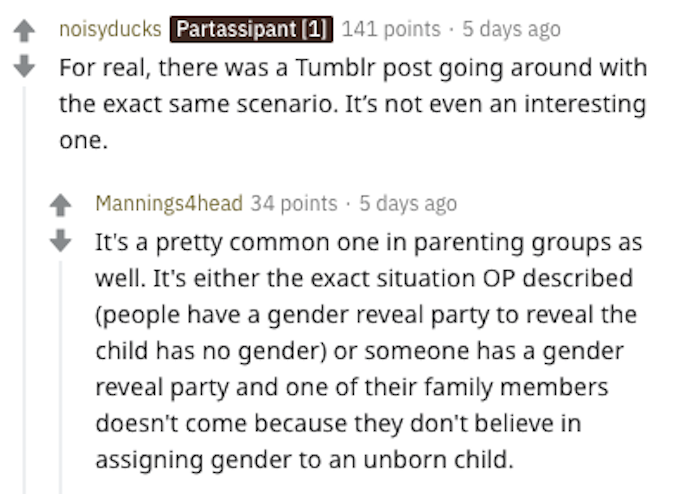 The real a**holes are always the trolls. Thank you mods, for recognizing this post for what it is.