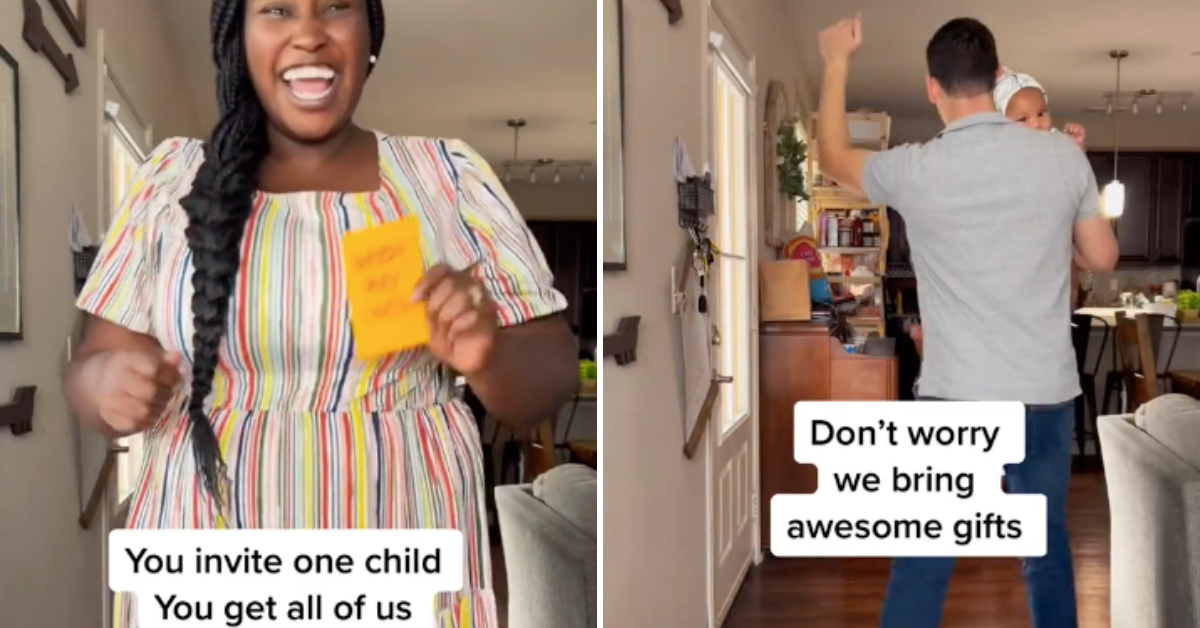 If you have multiple kids, sometimes it’s hard to break the news: your sibling is going to a birthday party, and you’re not invited.

TikTok mom Jeena Wilder, who has five children, posted a video recently discussing how her family navigates birthday parties that only one of her kids are invited to.

Her solution: You invite one, you get all of them.

“When you invite one of my children to a birthday party…” she wrote at the top of her video. “you get all of us.” Then, a train of her kids ranging from between four months to nine years follow behind her. Jeena’s husband then comes at the end of the train and the clip concludes with the phrase: “Don’t worry, we bring awesome gifts.”

The video, which went viral, sparked a debate between parents who loved the idea of including all the kids and parents who hated it.

Some folks said children should be allowed to have their own outings with friends that don’t include siblings. Some also noted that bringing more than the invited child was not fair to the family throwing the party financially.

Buzzfeed talked to Jeena about her video and her thoughts on birthday party etiquette. She told them that her husband works Monday through Saturday and has long hours and that she barely gets to see him.

“Most days, it’s just me and the kiddos. I’m not okay with dropping my kids off at a birthday party solo. So, my solution is: I always ask beforehand if I can bring siblings to the party and always pay for the ones that weren’t invited if the party is at an event place,” Jeena said.

“I never pressure parents or feel entitled to take my family to children’s birthday parties,” she continued. “But for me, I hate the idea of just dropping my kids off somewhere and picking them up hours later, but I also hate the idea of a child not having anyone show up to their birthday party. When my kids are older and I feel like they can understand what to do to keep themselves safe, I will feel comfortable with dropping them off at parties and picking them up later, but at this young age, it’s not happening.”