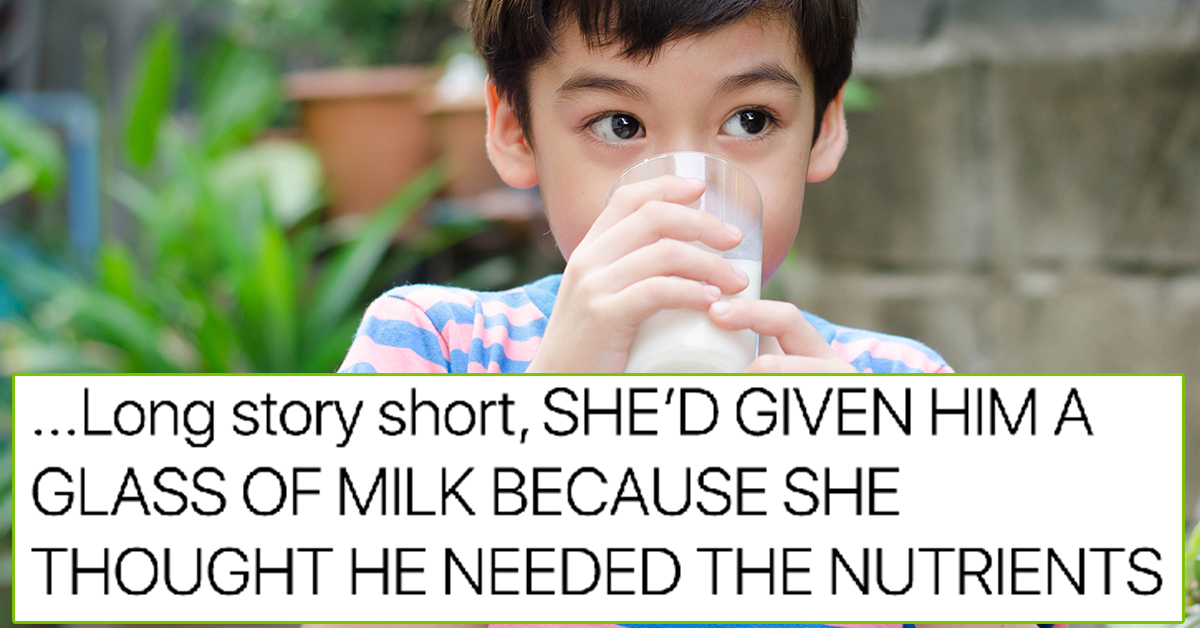 People on Reddit usually hate the vegans, unless you’re on the actual vegan subreddit. But in this story, the non-vegan is so egregiously bad, the vegan comes out on top. It was posted by u/OlivesBow on r/AmItheA**hole under the title, “AITA For not paying for ‘childcare’ and refusing to take down post?”

The OP says she has raised her son vegan, meaning no meat or dairy or animal products of any kind. He’s now two-years-old, and she’s just found out he’s allergic to dairy in the scariest way. It happened when she had a last-minute job interview and had to find a babysitter, or childminder (CM) as they seem to be called in the U.K.

Her sister has a CM she uses regularly and recommended. The CM was free so it seemed like everything would work out:

So I drop him off at her house a with a lunch box and tell her that we’re a vegan family and that he’s got enough food in there for the whole day. Everything seemed fine. (bit of background- he’s been vegan all his life so had never had any animal products)

Not even 20 minutes later I get a panicked call from the cm saying that my son looks very unwell and had thrown up and that I needed to pick him up immediately.

The OP ended up canceling her interview and rushing to pick up her son, who now has a horrible rash on his back and face:

So I get there and he’s now sobbing and had a rash all over his face, his older brother (who was at his dads at the time) had a dairy allergy and all the symptoms matched. I ask the cm if he’s eaten anything yet and she says no. I was kind of suspicious but believed her.

They ended up going to the emergency room, and the doctors confirmed her son was having an allergic reaction. Things are starting to add up:

I phoned up the cm and asked if she was sure she’d not given him anything (honestly not as nicely as I could have) to which she goes on a rant saying “kids shouldn’t be vegan its bad for them, they need nutrients and calcium to grow and you’re depriving him of it…..” long story short, SHE’D GIVEN HIM A GLASS OF MILK BECAUSE SHE THOUGHT HE NEEDED THE NUTRIENTS

That would be enough to make me lose my mind and I don’t even have kids. But it gets more outrageous:

The next say she sent me a money request for the payment we’d agreed on, I couldn’t believe that she had the cheek to send it but also was trying to charge me for the whole day when he’d been there maybe 40 minutes at most! Obviously I refuse. I then post on a local fb group everything that happened and now she’s threatening to take me to small claims court (can she even do this?? I feel like I should be the one suing her!) and has now told my sister until I pay and remove the post she’s no longer going to watch her kids either, so my sister gets mad at me too, saying that she needs the childcare and that I’m over reacting and apparently am a ‘crazy vegan’

The OP says she feels like she’s going crazy because she is the “only one who thinks that this is a big deal.”

Thank goodness for the commenters who rushed in to assure her she is absolutely not being “crazy.” If a mom tells a sitter not to feed a kid something, it means something. One commenter even said they have a dairy allergy that closes their throat and it would have killed them as a kid to drink a glass of milk. They also think the CM should get more than a bad review, she should be reported to the authorities: 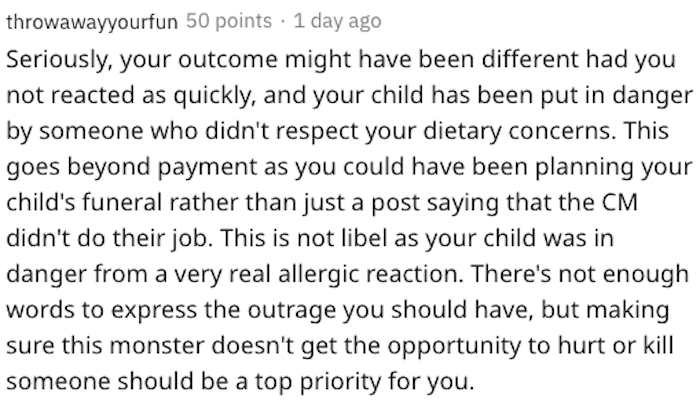 But some people are somewhat sympathetic to the sister, who is probably having trouble finding a sitter herself. Obviously she was taking what she could get to begin with.