The United States of America is absolutely enormous in comparison to most other countries and it sometimes feels like each state is its own little nation. Do we understand each other? Not at all. Are we still pretty sure what every other state is like? Absolutely. That’s what stereotypes are and that’s also why they’re bad. Stereotypes let us assume we know everything we need to know about something before really engaging with it.

The map was first shared by Twitter user @WynterStorm24, according to Know Your Meme, who wrote, “Hey Twitter friends, where are you from?” 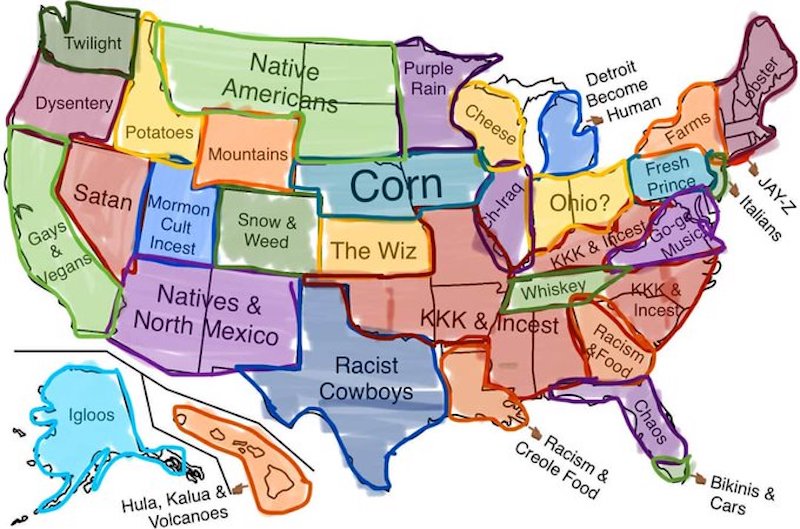 Each state has a word or two associated with it that represents the biggest stereotypes of the area, presumably from the perspective of the people on the outside. We gotta zoom in and see if these are accurate.

There’s the west coast, which offers dysentery, Twilight, Satan, gays and vegans. Really threatening me with a good time over there:

The middle south of the country is a whole lot of racism of various flavors, plus The Wiz and different cuisines. I’ll get my food to go, thanks: 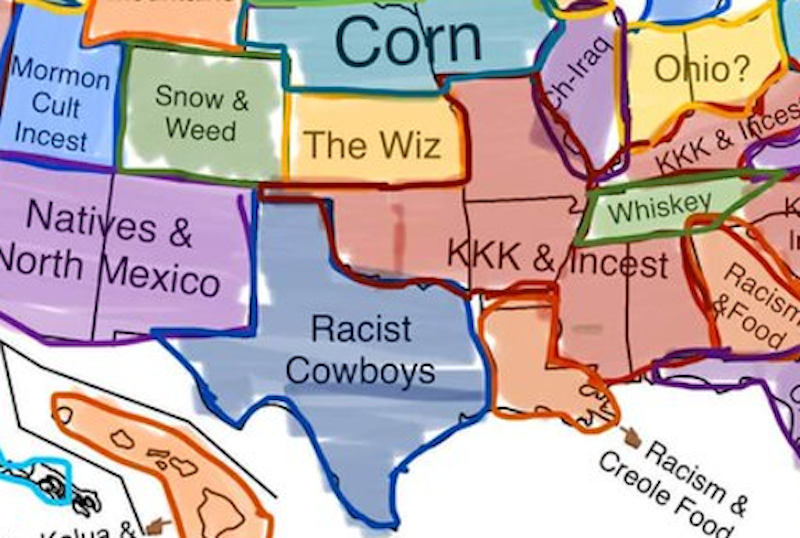 Not sure how I feel about “Native Americans” as a stereotype for a state. It would be more accurate to say that’s land that should belong to indigenous people. But at least Prince is represented:

I was pretty surprised by most of the stereotypes on the east coast, except for Florida which is very accurately summarized as “chaos.”

I’m from farms. But I live in Gays & Vegans. from r/BrandNewSentence

I live in a lobster state, what about y’all? pic.twitter.com/QPi4JTQXyx

Originally Gays and Vegans, but now I live in GoGo Music

where are ya’ll from?? i’m from racist cowboys pic.twitter.com/yh3l7JkFnD

I left Racism & Creole Food for Racist Cowboys. Except I’m in Dallas. It’s so gay and progressive here https://t.co/8GU2s04lbz

In the end, we’re all from the same big country and we have to change that together.