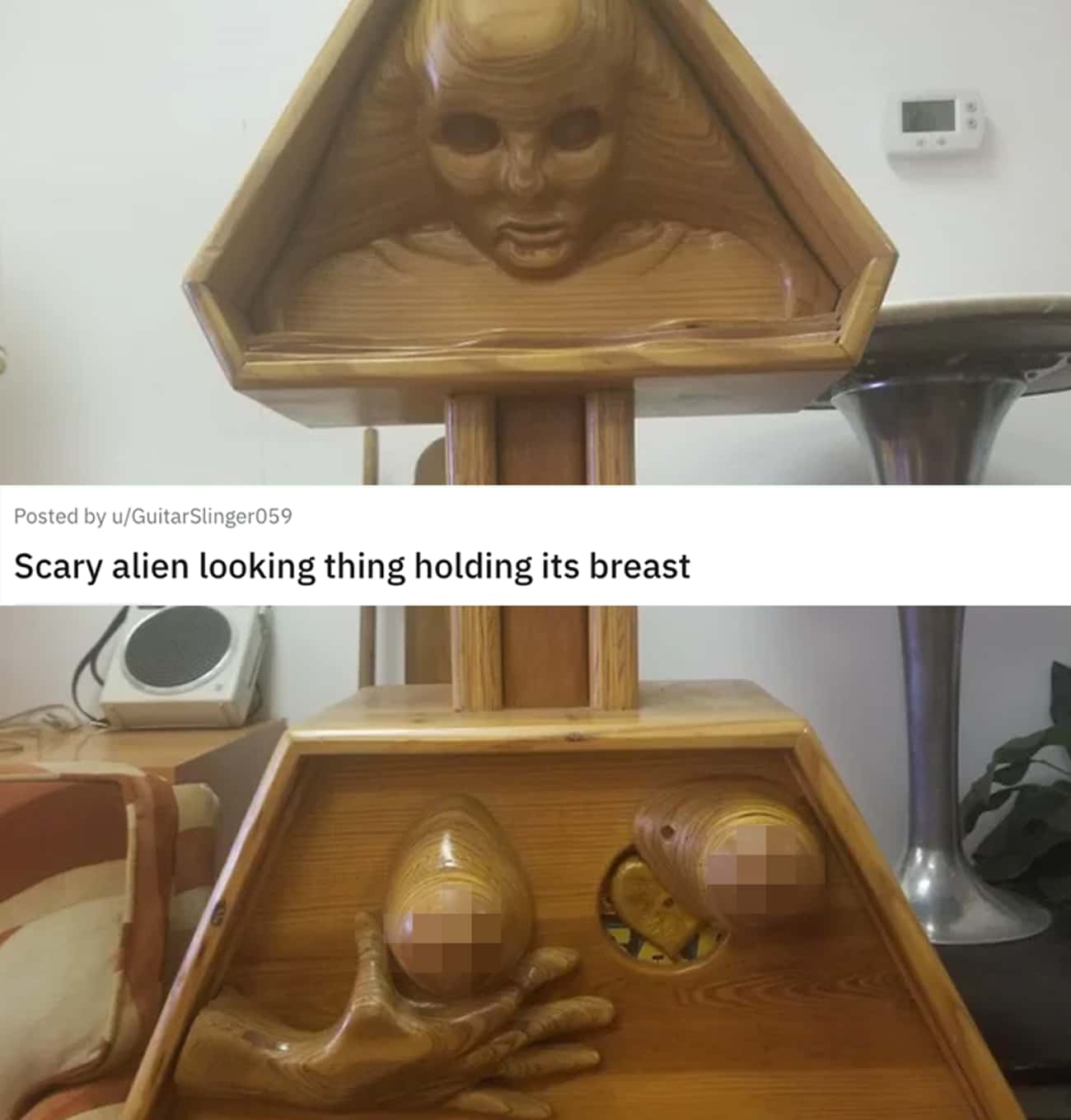 I think that was intended to look like a woman, not an alien, but was so poorly executed that it fell into the “uncanny valley.” As for why, well, if it’s a piece of art as suspected, then I’d say it just falls into a very narrow and specific aesthetic… maybe even a commissioned work for a client who is very much into the idea of “The Womanly Art of Breastfeeding” (that’s an actual book title, btw).

I don’t think it’s religious, let alone meant as “sacred art” – at least not from a Christian point of view. This would obviously be a postmodernist take on the icon you mentioned, but I think this particular subject would not be likely to be chosen for that kind of work because it doesn’t resonate with modern sensibilities. At all.

American culture, at least, still has the idea that breastfeeding is kinda disgusting and that breasts are sex organs with the peculiar additional function of baby-feeding. (Anti-public breastfeeding activists literally compare it to exposing one’s genitals in public.) So the postmodernist or absurdist or whatever take would get lost behind the inherent “weird/gross” factor.

17. Grandmother Received This From Her Friend After His Death. Nobody At The Senior’s Center She Lives At Knows What It Is. What Is This Thing?

18. This Belonged To My Great Grandfather. What Is This Thing?

Answer: If it’s legit, that’s a really old Gibson, from between 1903 and 1933. It’s going to be worth more than you think, so be really careful with it. Seriously.

19. Went Exploring In White Sands, New Mexico And Found An… Object. What Is This Thing?

Answer: Looks like it could be titanium – titanium spheres of similar size are a relatively commonly found space debris

20. My Girlfriend Found These In Her Dinner? Are They Seeds?

21. Researching Plantation Houses In The 1700s. What Is The Thing Hanging From The Ceiling In This Dining Room?

Answer: Very early ceiling fan. The rope at the top would be pulled to create the back and forth motion to fan the air and keep flies away from the table during a meal.

22. My Sister Found This When Cleaning Out A Fish. This Was In The Mouth And There Was A Smaller One In The Stomach. Anyone Know What It Is ?

Answer: Specifically, this looks like Concentrated Thermal Solar. It uses mirrors to reflect the light to a central tower which is barely visible in your picture due to the glare coming off of it. The light is then converted to heat where it drives a steam turbine, or some other heat engine.

24. I Found This Thing In My Food. It Was Just Stuck To A Piece Of Meat; It Wasn’t Lodged Into It Or Anything. Anyone Know What It Is?

25. It Is Approx. 3 Meters Long And Open At The End. Found With Some Similar Looking Ones Scattered Around On A Hillside While Hiking. What Is This Thing?

Answer: This device is called Gazex and it’s used to start avalanches, so they can control when and where they happen. This avalanche control system uses specially constructedand “exploder” sites and tubes built at key locations in avalanche territory to set off avalanches at controlled times. The exploders literally detonate a mixture of oxygen and propane from the tube structures. The explosive force expelled from the tubes triggers avalanches. The explosive bursts are fueled by gas canisters stored in tanks beneath the exploders on the mountain.

26. “This is a gate blocking road access to some cell towers. Why so many locks, and how would someone even open it?” 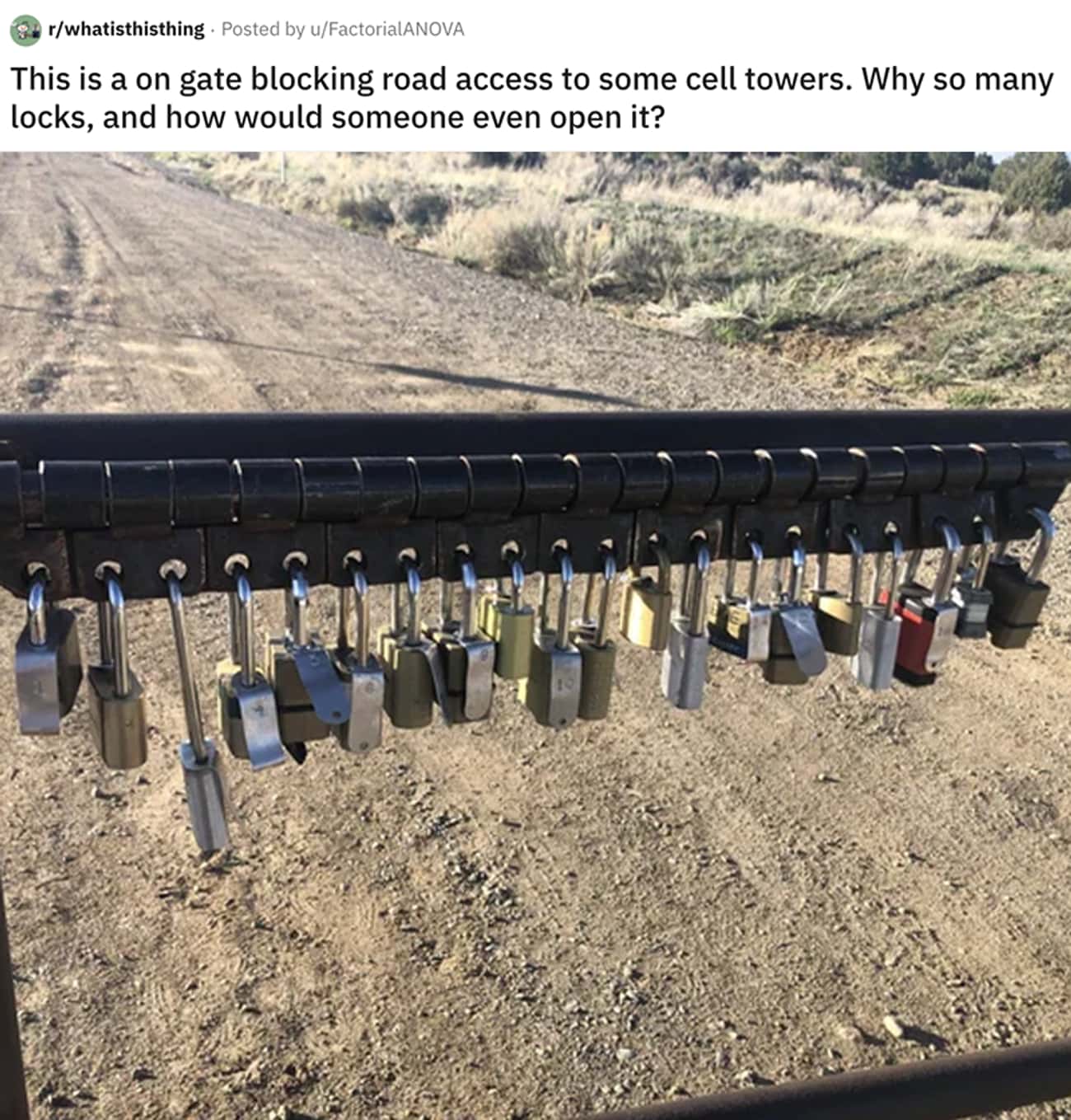 “You can open the gate by unlocking only one padlock. The way it’s designed means that multiple people can use the gate, and if one person loses their keys, only their padlock needs [to be] replaced. As opposed to one padlock with many keys, you’d need to give tons of people the new key.”

27. Found on Guam in shallow water. 3-meter diameter disk. Top looks like polyester in a honeycomb shape that is fiberglassed to flimsy aluminum disk. I’m stumped on this one. Never seen anything like it.

Answer: There was recently a Chinese Long March 3B rocket launch that failed, and the rocket and its payload was seen reentering the atmosphere near Guam.

28. Me and my parents found this in our backyard earlier today (it reads “do not enter poison gas”) it’s on a circular concrete thing.

Answer: It is the cap to a septic tank.

29. I found this squishy thing in my Monster coffee. I don’t know what it is and I’m pretty grossed out.

Answer: I’m a process chemist for a food company. Heat excursions and a tad bit too much calcium will lead to sodium alginate gelling. If you ripped it open, there would probably be a bit of a core where the alginate may not have fully hydrated. 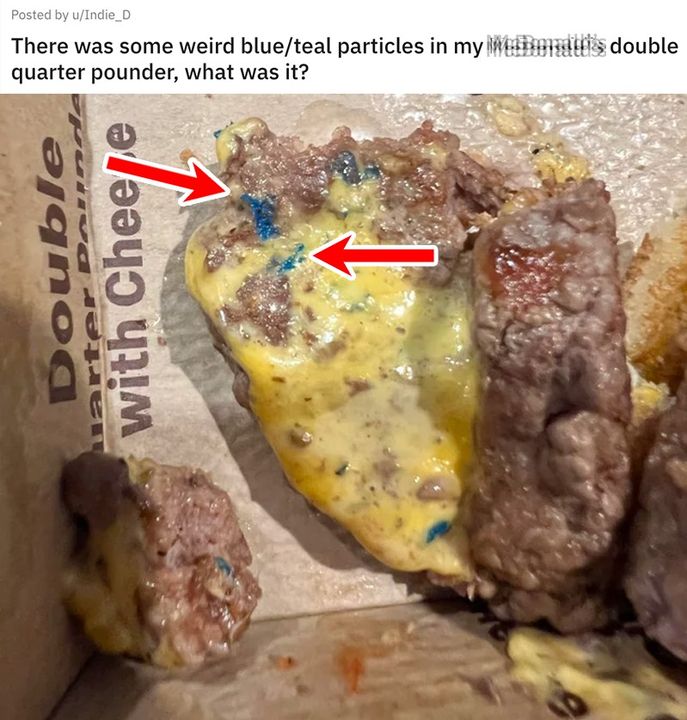 Plastic gloves. McDonald’s employees have to use blue gloves when handling the raw products.

Does this happen at the restaurant or a processing facility? Thanks for the information.

At the restaurant, somebody was likely very carelessly putting the quarter meat down on the flat top and got some of their gloves melted to the shell, which then ended up in your burger.