Do you unabashedly love your Crocs?

Are you one of those people who can’t stop talking about how durable and comfortable they are?

Do you wear them with everything and hate having to put on any other shoes?

Well, you are in luck, because now you can carry a bag that looks a lot like the Crocs on your feet. 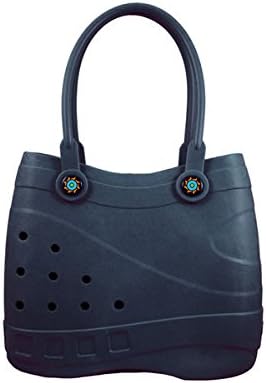 The bags, which are not actually made by Crocs but by a company called Optari, come in a variety of colors and two different shapes—the “Sol tote” (which comes in two sizes, the small handbag and the larger shoulder bag) and the “Crossbody.”

Although they don’t say it explicitly, it’s pretty obvious that the designs were inspired by everyone’s favorite holey footwear—the Croc.

And just like for the shoes, there are little “Fobbz Charms” that you can attach to the holes in the bag to personalize it.

But if you like the spare, minimalist look, you can just wear it plain. Just kidding, it still looks like a clunky, plastic sandal.

The website shows that the bottom ofthe bag is designed so that the bag will stand up on its own and not fall over, spilling its contents. That’s a plus.

The bags actually aren’t new, they’ve been around since at least 2013 because there are tweets referencing them that far back.

The bags are generally roasted on social media, but loved by their owners. The tweets are hilarious, but the reviews are glowing, so…insert shrug emoji.

there's a lady with a crocs purse. a CROCS PURSE.

Actually, there is a REAL Crocs purse, made in a collaboration with Pizzaslime. That bag is actually shaped just like a Croc sandal, and costs 300 bones. And it’s sold out.

So if you want a bag that looks sort of like Crocs your best bet is to go with one of these bad boys. And they don’t cost $300, either.

Go on, you know you want one!