It seems like many cis men skip entire chapters in health class that people who menstruate have to deal with on a monthly basis for the biggest chunk of their lives and this story from u/chancecreator now has me convinced that guys like him should have to pass some sort of test. A written test and also a test of endurance, maybe buying menstrual pads and tampons every month for a year or something. We’ll work out the details later.

But here’s the story, titled, “AITA for telling my stepdaughter to stop using period products in the bathroom she shares with my teenage sons?”

He says his wife and step-daughter moved into the house about six months earlier. She’s 19, and his three sons are 15, 16, and 18. He says he really likes having his step-daughter around and that she’s generally been a good influence on his sons. The four youths share a bathroom, and an unexpected problem cropped up.

The boys are unused to living with women, and none have had long term girlfriends. I’m gonna share the story in full as he told it because the escalation from “I love my step-daughter” to “MY HOUSE MY RULES” is amazing:

My eldest son, 18, came to me last week and told me that his stepsister disposes of her used sanitary products in the trash can they share, but doesn’t use toilet roll or sandwich bags to disguise what they are, and it makes him uncomfortable which I think is reasonable. My sons are teenage boys and don’t want to see their stepsisters period products on full display.

A few nights ago I went into the kitchen to grab a snack and she was there doing some work for university. My wife had mentioned that she knew she was on her period so I took it as an opportunity to have a word with her. I told her my sons were uncomfortable and asked her if she’d mind putting her used products in diaper bags or flushing them down the toilet.

She laughed and told me it was rich coming from a man who “sheds like a gorilla” and has produced “three skid marking sons” which I thought was just an unnecessary attack. I’ve been nothing but nice to the girl and it’s hardly a comparison. My sons shouldn’t be subjected to her unhygienic products if it makes them uncomfortable. She went on to lecture me about how tampons can’t be flushed and that it’s bad for the environment if she uses diaper bags for every one which I think is just an excuse. I called her a scruff and told her that this was my house and that what I say goes.

I later asked my wife if she could have a word with her and she told me I was being ridiculous and that her daughter has had her period for ten years and knows what she’s doing. When I told her it was making my sons uncomfortable she said my sons needed to get a grip and turned over and went to sleep.

This is a genuine issue to me and she didn’t care enough to have a discussion about it. I asked my stepdaughter again in the morning and she did the same as her mother, completely dismissed it. Both of them have told me to stop being so silly but I don’t see how I’m being unreasonable when it makes my sons uncomfortable. AITA? 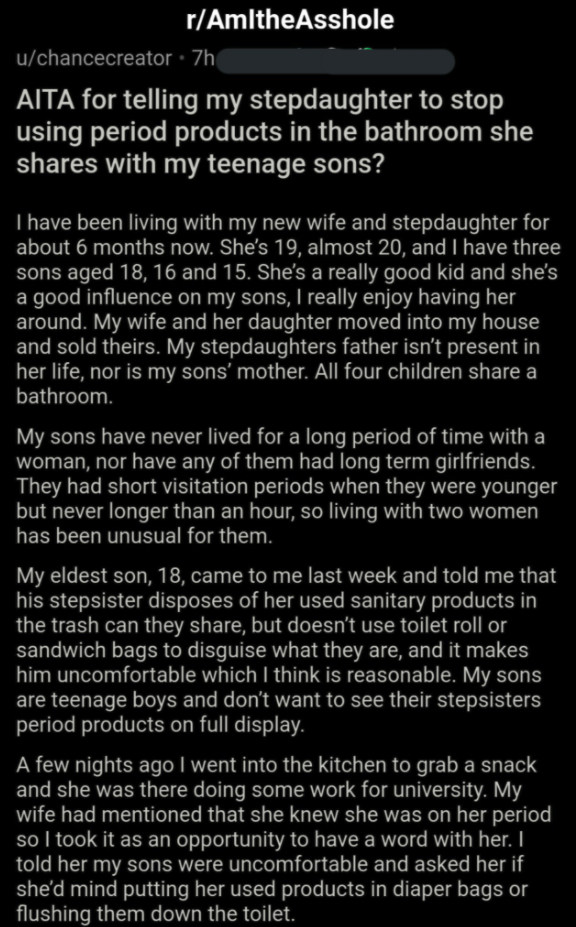 Okay, so when I first read this story, I imagine that his step-daughter might be leaving blood-soaked tampons on top of the garbage out in the open, which would be rude no matter who else was using the same space. But according to the OP’s other comments, she does wrap them up and puts them in a closed garbage can. So his sons are offended even knowing they’re in there:

Comments from before the update: pic.twitter.com/78T4OuxxFU 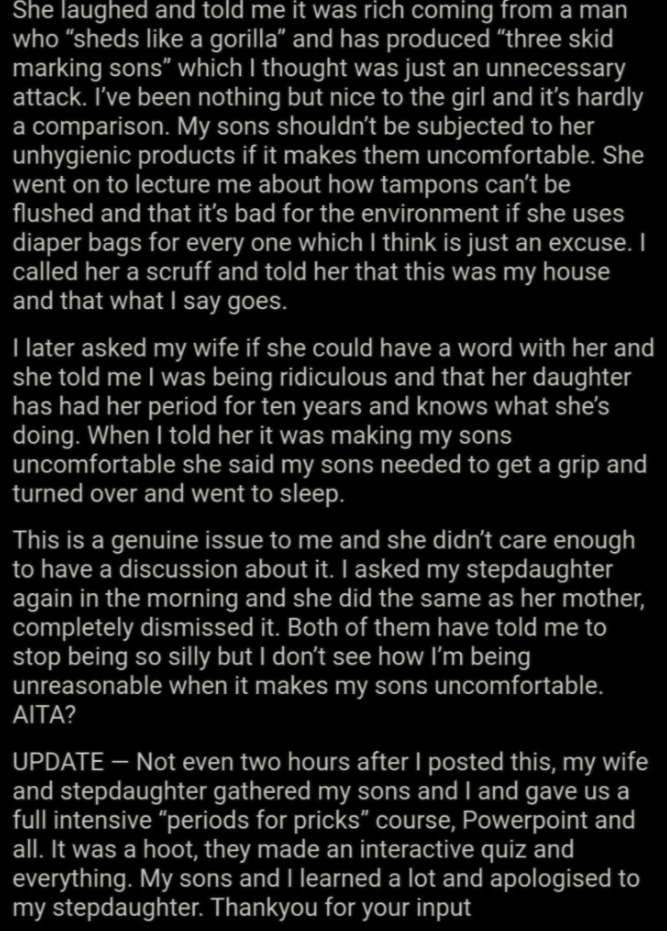 My goodness. Well, a lot of people started to take the OP to task, telling him and his sons to grow up, and fast, but then he added this edit:

UPDATE — Not even two hours after I posted this, my wife and stepdaughter gathered my sons and I and gave us a full intensive “periods for pricks” course, Powerpoint and all. It was a hoot, they made an interactive quiz and everything. My sons and I learned a lot and apologised to my stepdaughter. Thank you for your input

Um. Okay. Good, I guess? But as a lot of people pointed out, they shouldn’t have needed to do all that:

EXCEPT that 1) it shouldn’t have been necessary, and 2) he can come on the Internet and post all this but couldn’t look it up, though he had the audacity to have sex and create kids? Yes they’re different things but still.

Not snapping at you, but the bar is THAT low?!

Would really love to see that PowerPoint though 👀

Also, I was about to say “well, I understand wrapping it once with some toilet paper before throwing it away if they’re uncomfortable with the blood” but then he went on to call the period products themselves “unhygienic” and I realized he didn’t really mention the blood at all

The lowest bar, tho

I had a friend tell me that her husband complained that the teenager dropped a new unopened pad on the floor. She acted like that was a semi reasonable complaint 🙄

Or he could’ve done the work/research himself and not made them have to do it and not have been so gross about something that anyone experiencing a period finds a massive inconvenience at minimum.

Please, if you’re having trouble understanding how periods work, do a little Googling before forcing someone to make you a PowerPoint presentation. That way, you’re not wasting their time even more!