The Reddit AITA forum (which stands quite bluntly for Am I The A-hole?) is one of the best things on the Internet. It’s the place for weird, wacky, deeply nuanced stories you hope people aren’t just making up (but they definitely sometimes are) and then the subsequent judgment and finger-pointing those stories inspire. There’s also a nice dose of support and compassion from time to time, which is the real shocker.

From today’s Reddit AITA goldmine, we find a story from u/houseplantlover9, who wrote in with an issue around dating and periods:

The OP is a 23-year-old woman who has had a boyfriend for six months, and has “a good relationship, healthy sex life that we talk about a lot” and good communication. The issue? “A month ago I had the implant fitted (contraception) which has given me weird frequent periods. The doctor told me they should go back to normal in a few months and to wait it out, which I’m doing because I like the convenience of the implant…

We were in bed yesterday night watching TV and he went to initiate sex. I moved his hand away and said I was still on my period. My period had been going for about a week now so we’d not had sex in that time. Then my boyfriend made a really loud dramatic sigh and moved away from me. I said ‘sorry, I can’t help my periods.’ He replied ‘yeah sure.'” 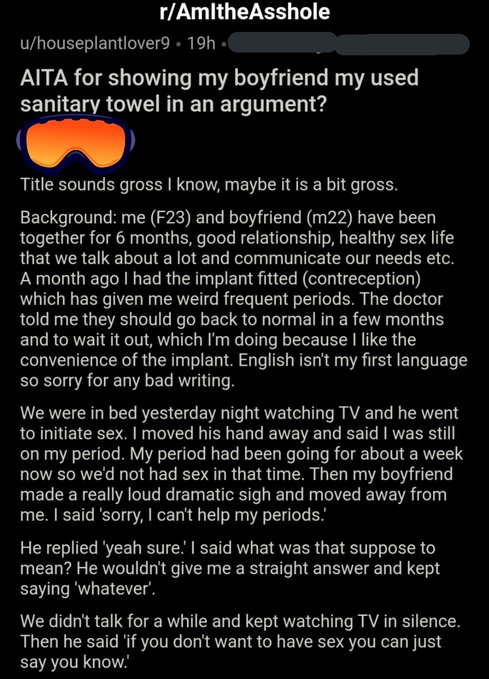 The guy then proceeds to get angry and infer that OP had been cheating on him because she didn’t want to have sex. So she rips out her sanitary pad to prove that she was in fact on her period—after which he flips out, leaves, and has his family text her to demand she apologize. 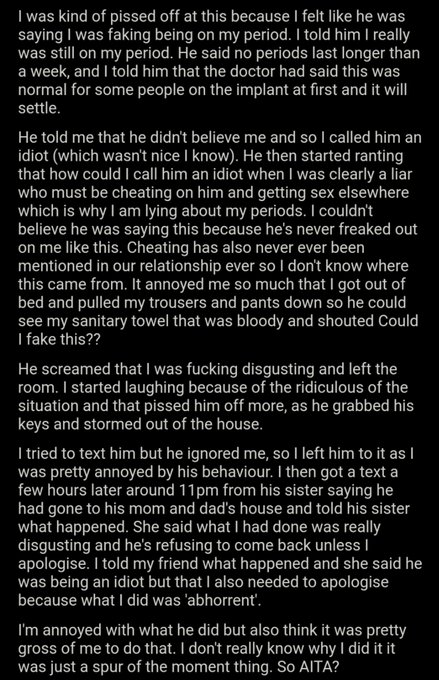 The OP then explains in an edited addition: “Edit: Just wanted to offer an update. This has really changed my perspective on things. I think I was so thinking about the sanitary towel thing that I hadn’t really realized how bad his behavior was. His mom actually sent me a message on Facebook saying what I did was disgusting and really abnormal and that she doesn’t think me and my boyfriend should date anymore. I can’t believe his mom is messaging me about this. I blocked her and messaged him that he needs to come and pick up the stuff that he’s left at mine. Luckily it isn’t much. He hasn’t replied but I saw that he has shared a post on Facebook about women being crazy. So I guess we’re done. Thanks to everyone who took the time to respond. And sorry to everyone else who is dealing with annoying periods due to contraception! It sucks!”

Let’s just get this one out of the way real quick. Dude needs a science lesson (and to get a grip; bodies are just bodies).

“Also, his idea that periods don’t last more than a week? He knows so much about women’s bodies.”  — BeefTheAlch

“I mean, come on. That is something that humans cannot control, and to get so mad when you were offered proof? You’ve seen the place it came from, dude, it ain’t that gross.” — neveradullmoment72

Now that we’ve shown what an idiot this guy is, let’s move on. The whole thread agreed that OP was NOT the a-hole, and that they were glad she’d gotten rid of him:

“Gold NTA. I would dump his ass. He literally got mad at you because you were on your period….. how much more childish can it get?” — spiritual-owl2

“I had a friend who thought we could hold it and got mad at his gf for not holding it through a weekend trip he planned. He was promptly dumped and called an idiot by all his friends.” — Lin0712

It all came down to the fact that he wanted to have sex and didn’t get any. Massive red flags all around.

“Yup! At the end of the day, he was just annoyed that he wasn’t getting sex. No matter what OP would have said or done, he would have turned it around on her.” — NurseRatchet16

“There’s a lot here wrong with the boyfriend but what boggles my mind is that he instantly assumes she’s cheating because they haven’t done it in a week??? That alone feels like a red flag.” — PossibleCook

” Agreed NTA. Also the fact that you’ve been dating for six months and he’s accusing you of cheating is a maaaajor red flag. That dude is paranoid and rude tbh.” — wistfulxwaves 70

This commenter brings up such an important point: “Don’t let his misogynistic family make you feel any type of way about flashing your pad to shut him up.” He should be the shameful one.

“Oh there’s more to it than that. He got mad at her for being on her period and refusing him sex he felt he was entitled to (btw, he’s not. Nobody ever is, and you have every right to turn him down for whatever reason) so he accused her of lying and cheating because in his mind, he knows more about menstruation than OP and her doctor, and lying and cheating are more probable scenarios than an extended and unpredictable cycle after changing birth control.

This guy’s a f—kin’ GEM, and I hope his family is oh so satisfied with the intelligent, logical and level-headed person they’ve raised him to be. Congratulations on dodging this bullet, OP, and don’t let his misogynistic family make you feel any type of way about flashing your pad to shut him up. When I was on depo (the shot) mine lasted 20 days straight and came back 10 days later. Everything about your post except the man and his family is normal, and I’m happy to hear you threw the whole man away. I was going to advise that you do so.” —about97cats

And to call mommy about it? Lord.

“What in the hell – after reading the edit I cannot believe he ran home and told his mom and sister about it. Everything about him screams childish. Not even touching the fact that he called you a liar and a cheater, I would consider if I wanted to date someone who was going to drag his family into every fight you have.” — myboyisapatsfan

“He got his mommy to downgrade his girlfriend. I think he can go lower. Such a sad little man.” — itsadogslife71

“I am so glad she dumped his ass. His mom is a wacko too. NTA op. Box up his stuff. Put it out the front door. Text him, tell him it is outside and he has 24 hours and it is going in the trash. Lock up. Then block him. Period.” — itsadogslife71

In the end, he sucks and she lucked out.

“Yeah, that guy can fling himself into the SUN. Even if you weren’t on your period, he’s going to have a tantrum about not getting sex whenever he wants? And then involves his whole family in it? That’s a scary mindset, especially since it’s only been about a week or so without sex.” — SugarSugarBee

More best and worst of AITA: