Going to a doctor or dentist can make a person feel incredibly vulnerable, which is why a lot of people avoid it as long as possible. And that sucks, because issues can build up and get more serious. That’s why bedside manner is as valuable as skill when it comes to the medical profession. This importance is illustrated by a story shared on Reddit’s r/AmItheAsshole, in which u/yayaheeyayahee says they encountered the wrong kind of dentist in a delicate situation.

The OP wrote that they 25, and in recovery for a purging disorder. Purging is sometimes only associated with bulimia, but the difference is that there’s no binge-eating involved. Vomiting a lot can really affect the enamel of your teeth, because it comes into so much contact with your stomach acids. Dentists often see this and are familiar with the signs.

The OP writes she hasn’t been to a dentist since she was 12-years-old and was incredibly nervous. They specifically asked the receptionist for a “kind dentist” because they have an eating disorder, and was assured they’d be paired with someone sensitive at the appointment. But, they say, that’s not what happened:

“The person who started the cleaning and exam was very rough and as soon as she got into it she made this long deep sigh and said “Let me guess, you’re bulimic?”

I started to say “No, I have purging disorder” and she cut me off as soon as I said no and said something like “Please don’t lie to me. It’s not going to help you or me. We’re going to have to (bunch of stuff I don’t remember/understand.”

I said “No, you don’t understand. I don’t have bulimia, I have–” she cut me off and said “It doesn’t matter. You have severe enamel erosion, several of your teeth have X and Y.”
I said “IT’S PURGING DISORDER” because I thought if I said “no” again she would catapult me.

She said “Okay, sure, “purging disorder”” with air quotes and rolled her eyes.

I’m not proud of it but I started to cry because it was already so anxiety-inducing for me. She got annoyed and took off her gloves, threw them away, and said she would be back when I calmed down. Instead of calming down, I just got my things and left without paying anything.”

When the OP got home, they were still extremely upset. They started writing reviews, and says they posted them to about seven sites. Two weeks later, the dental practice called and asked if “leaving those reviews really necessary.”

“I said yes, it was, to prevent anyone else from having the same humiliating experience. She argued with me that it wasn’t going to change anything or fix my teeth. I lied and said that I had already seen another dentist who had managed to treat me with dignity and respect and hung up. On the sites you can reply to reviews, someone responded to me and tried to pretend they worked with me to figure it out.”

The OP says they has shared what happened in therapy group with friends and received some backlash. A few people said it was wrong to leave so many one-star reviews, because that can really hurt a small business. Some thought it’s not the practice’s fault that “they aren’t trained better.”

“I don’t know. I think people need to know. AITA? Is it really that bad?,” she ended her query.

Overwhelmingly, people voted that the OP was NOT an a**hole. Reviews are how people know what to expect, and a small business shouldn’t be allowed to be a bad business: 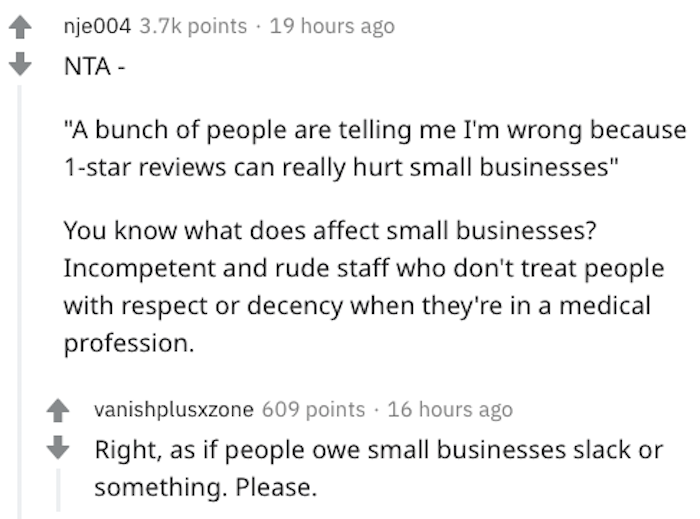 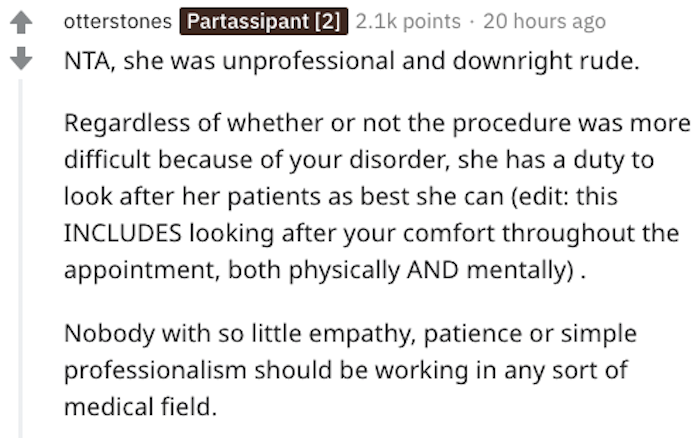 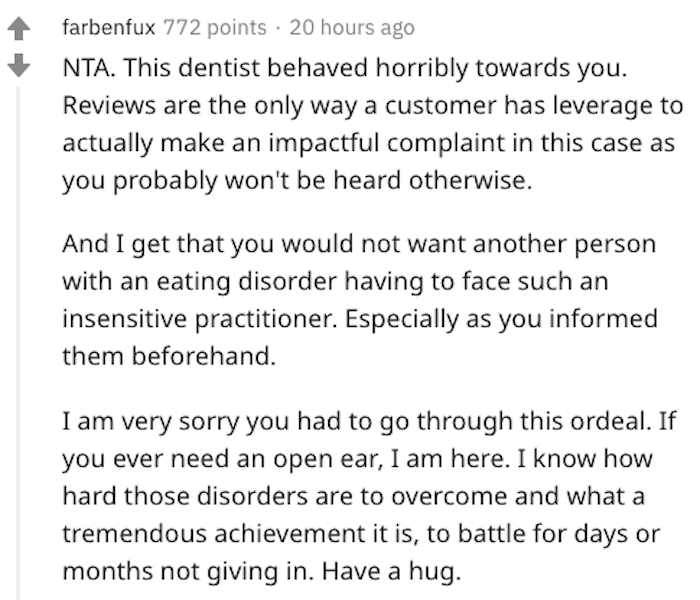 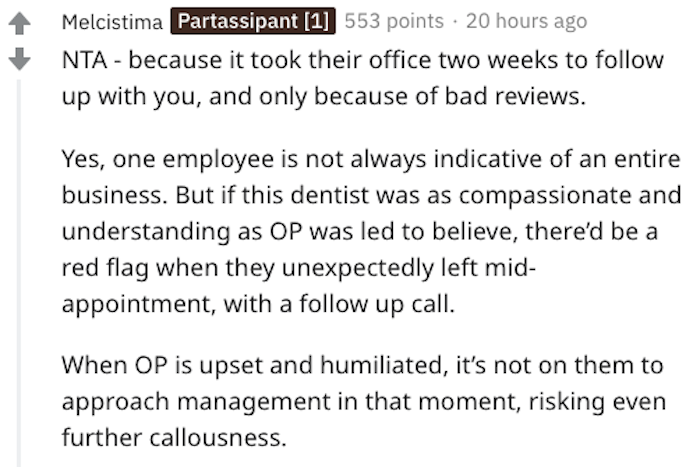 Even people who work in dental practices thought she was right, and some weighed in to say that bulimia and purging have very different effects on teeth, because of the amount of food usually present during vomiting. So, it does matter that the dentists didn’t care about the difference: 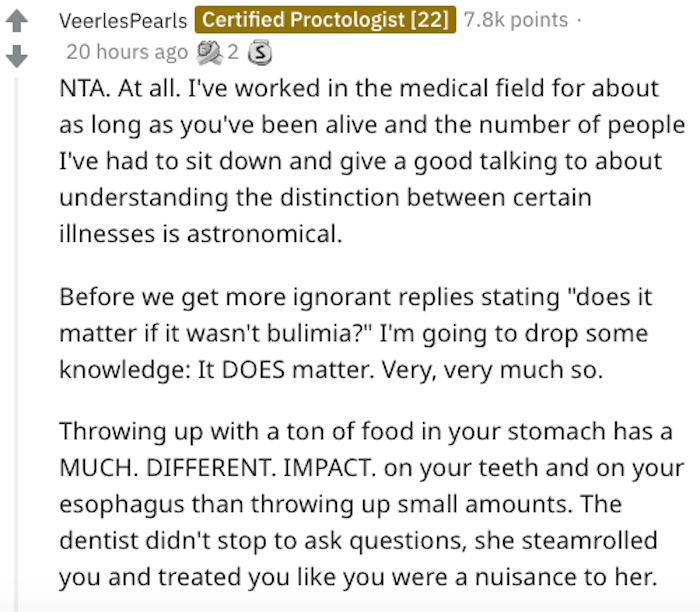 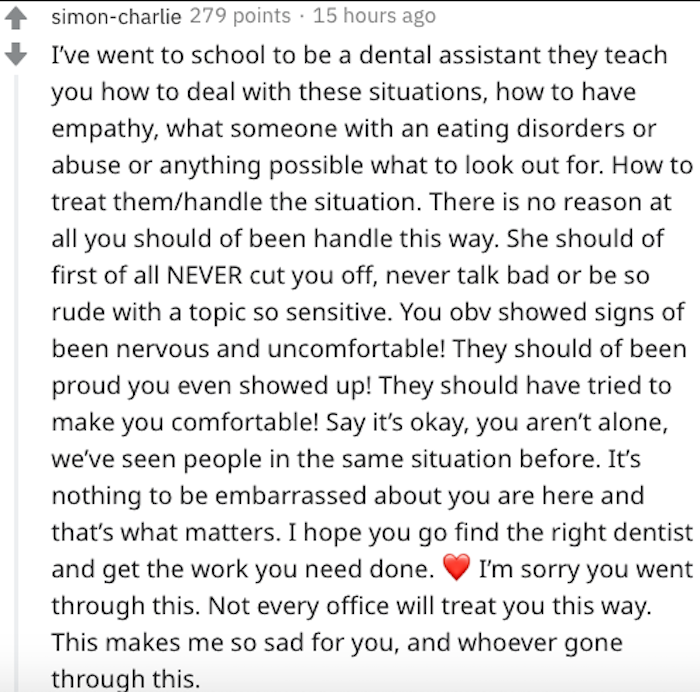 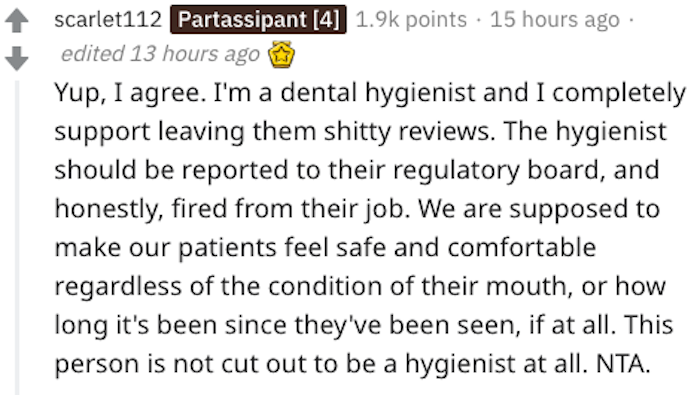