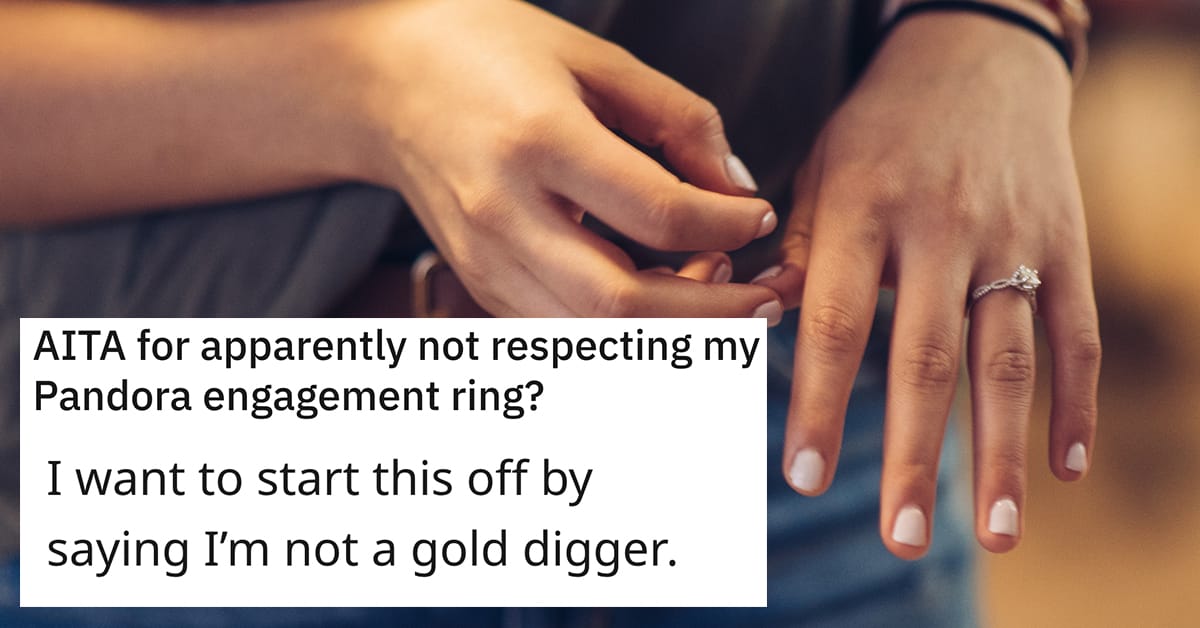 Over on Reddit, the account user u/bigstona posed an interesting question in an Am I The A-Hole forum that left many Reddit users scratching their heads. That is, she basically asked if she was a horrible person for not wanting her engagement ring to be a cheapy.

The OP explained that she’s NOT a gold digger, but that she found out her new engagement ring was just $80—and has some feelings about it:

AITA for apparently not respecting my Pandora engagement ring? from AmItheAsshole

In the post she writes, “I want to start this off by saying I’m not a gold digger. I got engaged 2 weeks ago and was more than happy to say yes even if there was no ring at all. But there was one and it looked beautiful at first until I later inspected it that night. It looked like a normal engagement ring but the metal didn’t seem heavy or feel normal. There was also something stamped inside the band that said “ALE.” I looked it up on google and it brought me to Pandora’s website. I looked through the website and found my $80 ring.”

Her concern, however, wasn’t exactly about the price. It was about the ring’s inability to last 40+ years.

“I won’t lie, I’m upset but not because of the money. It’s because my initial thought was that the ring won’t last. No, this was not meant to be a place holder ring. He meant to give me this as my forever ring that I wear for 40+ years.”

“I confronted him and told him I noticed the ring was plated rose metal and that it came from Pandora. I told him it has nothing to do with the cost of the ring but I was worried it would tarnish and the Cubic Zirconia would get ruined. He said that I initially told him I loved it, which was true. It’s pretty looking. He then said do I still like how it looks and I said yes but it’s fake metal and won’t last. He said that if it’s not about the money and it’s not about how the ring looks then I have nothing to complain about. He said Pandora specializes in have a bridal ring section and they wouldn’t make an engagement ring that wouldn’t last.”

Here’s what Reddit had to say. Let’s get the YTA (“You’re The A-hole”) comments out of the way first:

“I’m going to go with YTA because you’re making a big deal out of nothing. My parents pawned their wedding bands in the 90s because they had 2 kids to feed, they’ve been together 30 years, married 27, most of that 27 without a ring. You have much bigger problems if you’re so worried about whether or not that ring will still be on your finger when you’re old and grey.” — aardappelbrood

YTA. You don’t marry someone or love someone because of material possession.” — Swift747

“YTA. If you didn’t care if there was a ring at all then why do you care if its $80 or if it will “last”. Was buying you a nicer ring down the road out of the question? I think you like the idea of not caring about a ring but you actually do care and maybe you should fess up to that and see if he’ll save up in future for one you can pick out for yourself. Also, IT IS about the cost of the ring because any high-quality metal with a genuine stone is going to cost something. Just tell him what you want and stop trying to be the girl that ‘doesnt care about that.'” — Crolleen

Others, however, cut right to the core of the issue, calling “Not The A-hole” immediately (and inspiring thoughts of  ‘Is this really the man you want to marry?’)

“It’s dirty not to be upfront about a ring being fake. NTA. If he insists on the $80 version and doesn’t consider a couple hundred for a decent fake a bargain compared to tens of thousands for the real thing, he’s bad news.” —mbbaer
“Agreed, NTA, his reaction is what makes him TA. He isn’t obligated to buy an expensive ring, but he can’t have it both ways, by cheaping out and demanding she treat it with kid gloves. OP, buy your own. It’s a problem if he has an issue.” — Originalhumanbeatbox

“I’m interested in whether this is a pattern of behavior for him. Blaming her for something like this, being defensive, etc. If so, definite red flags.” —Gagirl4604

“Also the whole “not respecting the ring” is pure gaslighting bullshit. Most people wear their wedding ring all day every day until they die or get divorced. It goes through some shit. That ring is definitely not going to last. On the plus side, when it does die you can pick out a new one. NTA.” — MargotFenring

“NTA. Your ring is supposed to be one that you wear every day for the rest of your life. It only makes sense that you want it to last and a cheap plated ring that is already getting dull isn’t going to. I’m also tired of the idea that women need to be grateful for any ring they’re given. While you shouldn’t expect anything ridiculous, you need to wear this ring every day so it should be one you’re at least happy with. If the price is the issue then consider pointing him in the direction of beautiful antique rings with real metal that will last.” — pandatree_157

There was also A LOT of Pandora hate (which isn’t surprising).

“NTA. Pandora is the Olive Garden of jewelry.” — SilverScreen2019

“Oh my god. I know a girl who’s a GM of a Pandora and talks about it like it’s Tiffanys. I nearly choked on my wine reading this. — FunFatale

“NTA. I used to work at Pandora and those were literally the rings that high schoolers would buy as promise rings for their girlfriends. They’re not meant to last for very long, definitely not a lifetime. It’s possible to both respect the ring and at the same time see it as a placeholder for your real ring. I feel like your fiancé needs to keep that in mind.” —StormySands

“LOL. Take my upvote. I almost snorted my drink here. This is so true. NTA. Pandora advertises as being “classy” and expensive, but the truth is, I could make the same quality jewelry from beads I can order online and have delivered for 1/10th the price. Their rings aren’t gonna be any different. Now, your fiancé might not know this, so he’s not necessarily TA, either. But he should be listening to your concerns and respecting them.” — Squirrelgirl25

“NTA. Pandora bridal section? They’re not lasting rings. The metal plating will wear off and the CZ will cloud eventually. I understand being price-conscious but he could easily get a gold/moissanite ring for $200-$300 that WOULD last a lifetime and you wouldn’t have to worry about getting it wet. Take a look over at r/moissanite If you don’t want a clear stone there’s always affordable gemstones that are beautiful. Sapphires are great for everyday wear because they’re hardy. I’m afraid of the bigger issue here though. I don’t want to throw up, but I don’t like how he’s blaming you for an $80 piece of fashion jewelry falling apart. You told him your concerns about the ring and he just told you that they didn’t matter. This isn’t a good way to start a future marriage.” — louloomoo

A dude chimed in on the ring — a necessary perspective, we think. He suggested that the ring issue was probably a “litmus test for [something] which is a really sh—tty way to have a conversation about compatibility.”

“NTA. I’m a married guy, which means I’ve spent money on a ring, and I’m practical which means that I’ve complained about how much a few oz of gold and carbon cost–but even I think your fiance is out of pocket here. It’d be one thing if this is what he could afford–but it sounds more like this is some weird litmus test for [something] which is a really shitty way to have a conversation about compatibility. Just talk about it directly, buy the $500, 1/2 ct, 14kt gold starter ring and skip the fashion jewelry, my guy!” — bad-monkey