In an AITA, or Am I The A-hole, post on Reddit, one woman presents quite the wedding planning proposition. Should she, in a totally-not-a-bridezilla move, ask her future husband to wear five-inch man heels to their wedding?

The OP explained that she’s 5’3 and he’s 5’5, which would be fine — except that she’s wearing a fancy pair of Jimmy Choos to the wedding, and that she’s gonna be taller than him.

WIBTA if I ask my 5’5 fiancé to wear “man heels” to our wedding?? https://t.co/GbRgZU70sG pic.twitter.com/vCsA64ZeUq

She writes, “I can already hear all the annoying comments people making about me being taller than him. When we first started dating a lot of people would say things like, ‘omg I couldn’t imagine dating someone under 6.’ You guys are like the same size!” 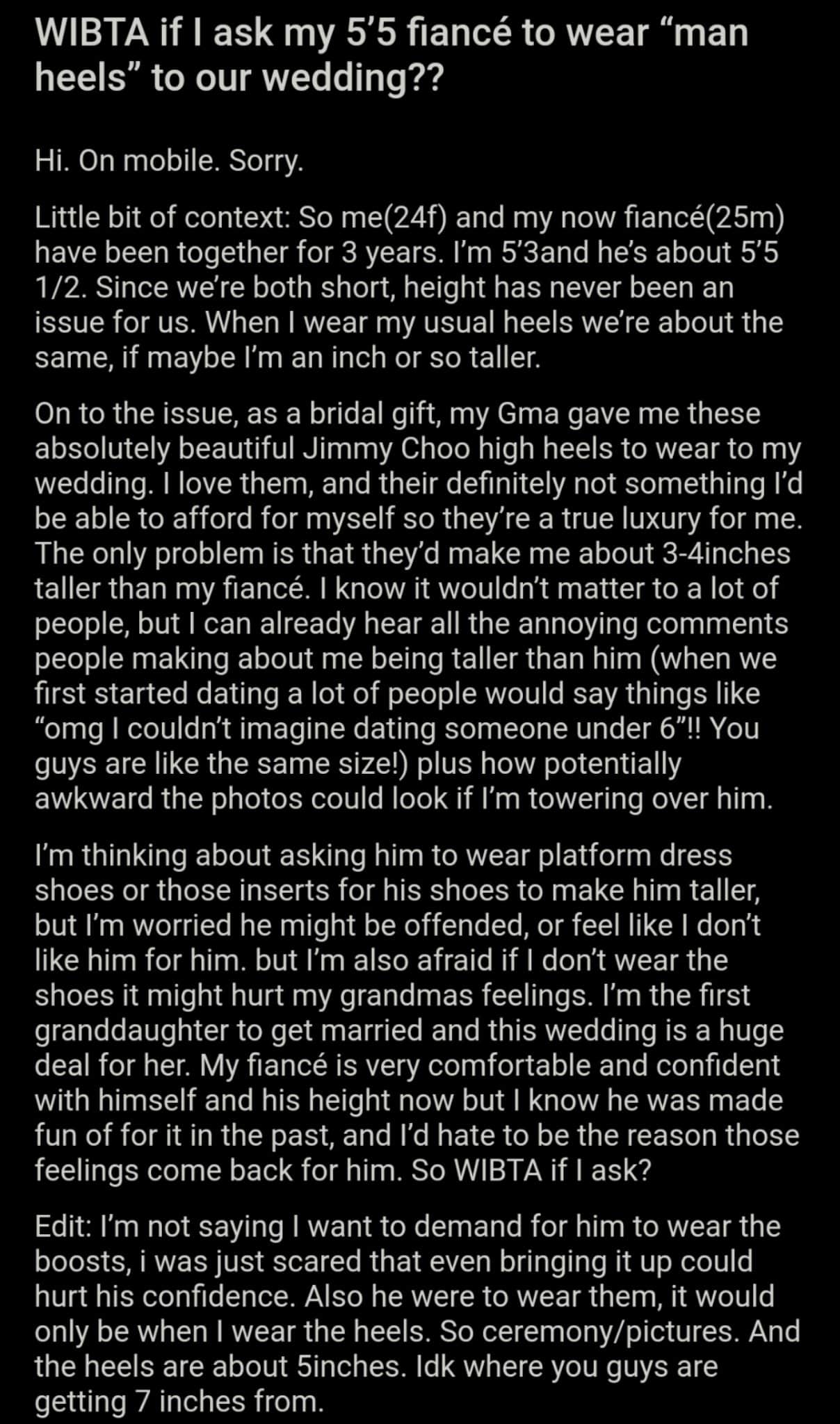 Her plan? “I’m thinking about asking him to wear platform dress shoes or those inserts for his shoes to make him taller, but I’m worried he might be offended, or feel like I don’t like him for him…but I’m also afraid if I don’t wear the shoes it might hurt my grandma’s feelings.”

She also mentioned that her fiancé had been made fun of in the past for his height and that she didn’t wanna add to that trauma. “I’m not saying I want to demand him to wear the boosts,” she wrote, “I was just scared that even bringing it up could hurt his confidence.” Oh, and he’d only need to wear them for the pictures.

Here’s what Twitter had to say. Some folks defended the OP, which seems a bit generous:

Comments are being mean to OP, she’s not wearing a glamorous dress like it sounds like she’d want, she wants to wear pretty heels for her wedding day. That’s not a crime and it seems like she wouldn’t be upset if fiancé says no, but y’all are treating her like she’s shallow

…which others responded to with a pretty fail-proof argument:

The heels are not the problem. The problem is that she is bothered that her husband might look shorter than her. That’s the shallow part.

Why not just explain to grandma that you love the shoes, you’re gonna wear them, and it’s gonna make you taller than your man because you’re a goddess like that. Who cares?

her solution here is to see if her husband will wear lifts instead of explaining the issue to her gma. this gets solved w/o hurting anyone’s feelings with a single sentence, but op puts the onus on her fiance to decide b/w wearing lifts or making her feel bad. thats an asshole.

I’m 6’1. I dated a girl for awhile that towered like 6 inches over me. It didn’t bother me, because it’s dumb as shit for people to be like “lulz, you’re shorter than a girl”. Stop perpetuating this ridiculous concept that women *must* be shorter than the men they’re with.

Wait does nobody here think it’s a total AH move to ask someone to change their appearance for their wedding because people might laugh at them?

24 is too young to get married. Hope that settles it.

And then the conspiracies took over:

This is fake and written by a man. How do I know? I am really into shoes but haven’t seen anyone mention Jimmy Choo since 2006.

Yeah, how come more people aren’t mentioning that her grandma gifted her a trashy pair of shoes that are going to look terrible on her because she’s 5’3″?! Who’s willing to bet that they’re from the midwest?

A good rule of thumb is to always turn judgemental statements back on the hater:

Why is this so complicated?
Try on the shoes and stand next to him and then see what he says. And if OP only cares about the “annoying comments” if she is taller than groom, then she can simply say, “What an odd thing to say” and walk away in the Jimmy Choos. pic.twitter.com/Gga1x1RPkL

More of the best and craziest AITA on Reddit: