People want to have the perfect wedding. They do. And that’s understandable. But what happens when you force your wedding guests to cover their tattoos? Does that become bridezilla territory? For most people, definitely yes.

In a now-deleted AITA Reddit thread titled, “AITA for making my SIL cover up her tattoos with makeup for my wedding?” (AITA stands for “Am I The A-Hole?”)  a bride-to-be describes a situation that initially makes her seem like, yes, a total a-hole: Her sister-in-law is covered in tattoos and is planning on wearing a spaghetti strap dress, and she’s just not into it.

Except that her sister-in-law is covered in white supremacy tattoos (even though she’s “not a nazi, she’s just proud to be white”). Not the a-hole anymore, huh?

The OP wrote, “One is the number 1488, another is the confederate flag, and another says ‘white and proud.'”

This will make you 180 so fast you’ll leave your eyes behind like in a Tom and Jerry cartoon. 👀 pic.twitter.com/oHise7D2dK 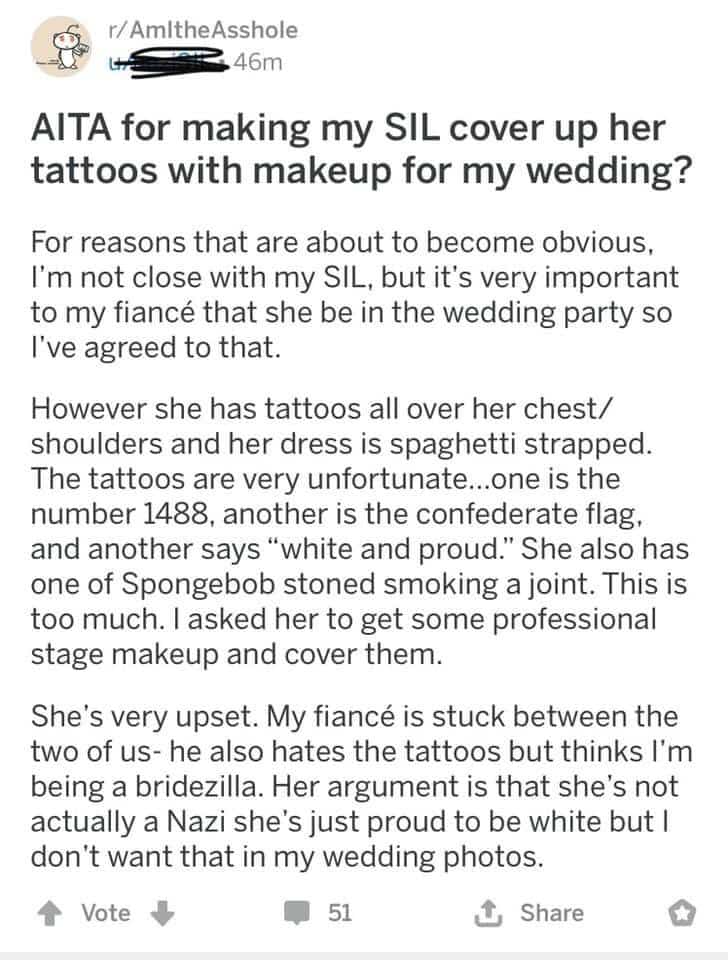 A lot of people were asking the obvious question: WHY are they still allowing the sister to be part of the wedding?

The fact that the sister is even in the wedding is making me ask some serious questions about the bride.

And is the husband totally okay with it, too? There are always the annoying, get-too-drunk-at-weddings family members, and then there are the white supremacists who somehow are part of your bloodline. And they probably shouldn’t get invites.

The fiancé; “On the one hand the tattoos don’t look good but on the other you’re kind of being a bridezilla for objecting to displays of white supremacist imagery at our wedding, so there are good people on both sides.”
That seems worth reconsidering marrying him over.

Why the hell is the fiance so dead set on having a racist in law at their bloody wedding is what I want to know???

NTA. But the fact that he doesn’t seem so bothered by the tattoos might be a red flag.

A cheese grater seems the only way to remove those tattoos.

NTA even if OP had asked her to remove the tattoos with a cheese grater then revoked the invitation anyway.

The whole post was a roller-coaster from start to finish, and this is exactly what it felt like:

Then there were some pretty lame responses…

The win-win solution is to let her be in all the photos, tattoos and all, then get the wedding photographer to airbrush the tattoo out in post-production.

Which were quickly shut down…

People pointed out of the most out-of-control statements in the AITA post itself:

“Not actually a Nazi just proud to be white”

“not actually a nazi, just have clear and blatant nazi ideology tattooed on me forever”

“Not actually a rapist just had sex with women who didn’t consent to it.”

Oh, and regarding that Spongebob mess?

Spongebob is not white 😱😱😱. He loves a good rainbow too. Who is going to break it to her? 🤷🏻‍♀️ pic.twitter.com/LtOnb8jLKJ

So, yeah, maybe everyone IS THE A-hole?