If you’ve ever worked in hospitality, you know what it’s like to be yelled at by a stranger over something totally meaningless, like the width of their straws, or how chilly the outdoor seating is. Folks think that they can scream at you over nothing at all because they bought an iced latte.

A Redditor named u/throwRA-fhfsveyary has found the perfect way to thwart entitled customers, but she’s wondering if she’s gone too far. As one does, she brought her story to the Internet to decide, posting on subreddit r/AmItheA**hole for her verdict.

The OP says she works in a coffee shop and is in high school. Most of her co-workers are also quite young. She says it baffles her that big grown adults get so pissed off with them over nothing:

So sometimes customers will come in and just be angry about such little stuff. Like literally blow up about nothing. I dunno if theyre in a bad mood already and looking for someone to take it out on or what, but it’s a lot… Like how sad so your have to be to be a grown-ass man taking your anger out on high school and college kids.

She and her co-worker James cooked up a response that involves some elaborate theatrics:

So one day I was at work and some guy was having a temper about how we don’t make the coffee hot enough… Which I couldn’t do a thing about because I gave it to him right out of the machine.

So James came in and was like “sir is there a problem here” and the guy started ranting at him too. So he was just like “OP, this is unacceptable, you’re fired.”

I started acting real sad, like “no please don’t fire me, my family needs the money, I need this job, pleaseeee” and he played up being a hard-ass, telling me to take off my apron and leave.

The angry guy started to backtrack, like “It isn’t that big of a problem, you don’t need to fire her over it. I didn’t mean it” and James was like “No, we pride ourselves on the best customer service”

Of course after all that drama I still had my job, we were just acting. And we’ve done it a couple times, whenever a customer will lose their temper at Danielle or I, James will storm in and “fire” us. And almost every time, the person who had come in angry will apologise and say that they didn’t mean it. It’s kind of satisfying, making people realize their actions might actually have consequences.

The OP says she told some friends about this, and they said the prank is too cruel and extreme. So, she asked, is she the a-hole?

Most commenters think absolutely not and are deeply satisfied by what they see as vigilante justice. In fact, the story made its way to Twitter where it was even more celebrated:

Willing to bet so much money those friends who thought she was being mean we’re rich kids.

They brought it in, they can carry it right back out.

But one comment that is worth considering was written by flople, who said, “Is this a good idea? I know if I see a manager or lead fire an employee in public I would think less of the business and management. And likely get my coffee elsewhere. You may be indirectly costing the business by doing so. May not be a big deal to you, but to the owners of a small business it can do harm.” 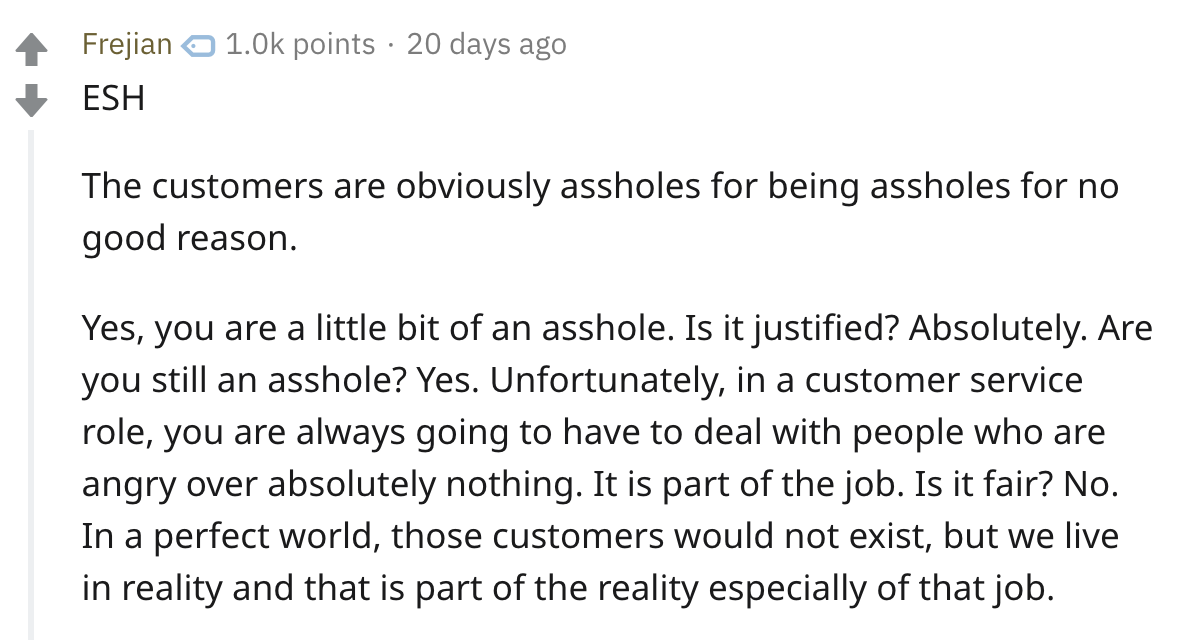 So, if the OP cares about the business she works for, she should rein it in. On the other hand, if it’s a Starbucks, go nuts.