In we-can’t-believe-we-are-actually-writing-this news, people on Reddit and Twitter are debating over whether or not it is safe to leave a child in a car.

In the subreddit r/AITA (Am I the Assh*le?), a user asked if they were the assh*le for calling the cops on a woman who left her toddler unattended in the car while she ran into a store.

AITA for calling the cops on someone who left their baby in a car, even though they said they were coming right back? https://t.co/aosm1WwUdw pic.twitter.com/RSVsL7r6VL

The post is titled “AITA for calling the cops on someone who left their baby in a car, even though they said they were coming back?” 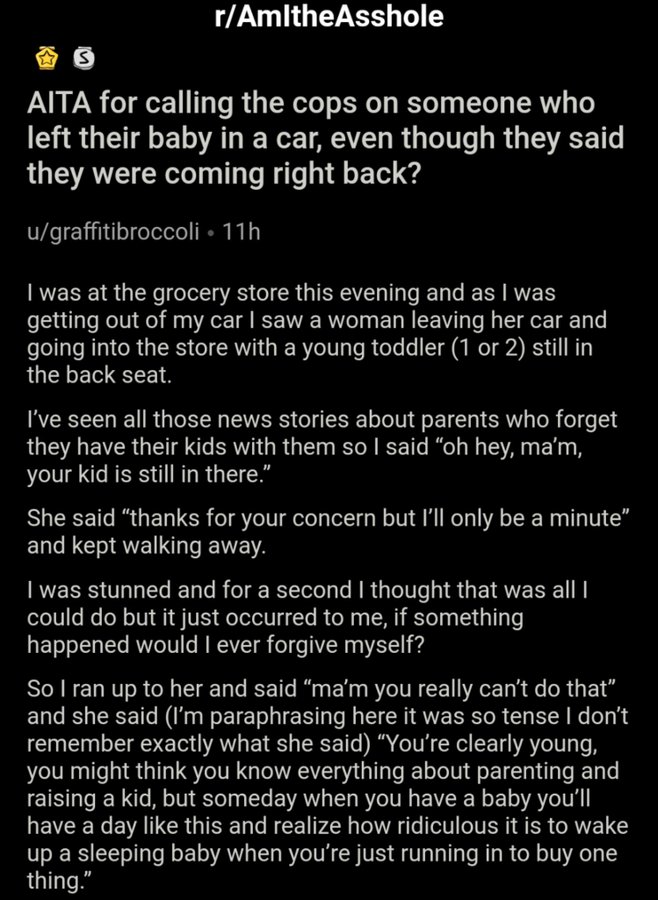 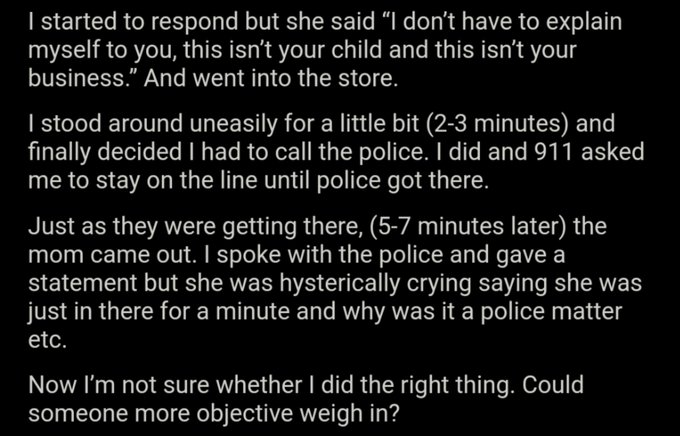 The post starts out by saying the OP was at the grocery store when they saw a woman leave a toddler-aged child in the backseat. They alerted the woman that the child was still in the car in case it was an accident. The woman said “Thanks for your concern, but I’ll only be a minute” and walked away from OP.

The two argued, with OP telling the woman she can’t do that to her child. OP paraphrased what the woman said, and the reason she left the child in the backseat is because she didn’t want to wake her kid.

After the two parted ways, OP called 911 to report the child in the backseat.

The post drew so much controversy that moderators ended up taking it down and disabling the comments.

Holy shit, obviously YTA. If you’re that concerned, stay by the car yourself, but don’t call the cops on someone.

— The resurrection will not be televised (@votarycannon) November 22, 2019

I can see why you would be upset but it makes no sense to call the cops if you’re going to stand there anyway. Not that mom is going to have to deal with possibly getting her child taken away. YTA

I get why people are saying YTA but no, it’s not wrong to call the police on someone for doing something clearly wrong, after asking them to do the right thing, especially and specifically when a child is involved. I get what the mom is saying, but no. You can’t do that.

Let’s talk this thru. The poster’s comments say it wasn’t hot nor cold, and the mother took 8-10 min. The poster stayed for police questioning but REFUSED to offer support staying by the car even tho she “was concerned”. She’d rather the mother *be arrested* than offer to watch? pic.twitter.com/F46crH1yu6

I agree. So many things can happen so very quickly. She can get hit by a driver on her way into the store and then you have an unconscious mom everyonestarts taking care of and a baby alone in a car no one knows of.
This always scared me, I wouldn’t leave my kids in a car.

YTA. The baby is sleeping, and no one, really, no one at the grocery store wants to have to put up with a crying baby. Also cops are bad, always, unless someone is perpetrating a real crime. The lady was gone for 10mins, tops. It’s not the middle of summer, so everything’s fine.

I don’t think it would even occur to me to call the cops in this situation. YTA for sure – the legal system is a nightmare land where consequences hardly ever match actions. This lady could lose her kid or get deported. Don’t talk to cops unless there’s really no alternative.

NTA. How could you prioritize 10 min of convenience over the safety of your baby? Being a parent is ridiculously hard, but you DO THE HARD THINGS, not the risky ones just because they are easier. The risk here was very low, but she still risked it at the expense of her child.

Don’t call the cops unless there’s literally no alternative. She was 100% wrong to leave her child in the car like that, but this could cause her to lose custody & never see her kid again. Good intentions but the consequences could be catastrophic so YTA, albeit unintentionally.

Seriously. If they were that concerned, stay by the car. Calling the police just meant they wanted the mother to be punished.

I have a lot of clues about parenting.

She did the right thing.

At first I was NTA until I realized that you never know what someone is dealing with personally so involving the cops can get them deported or worse (stuff that has nothing to do with the kid in the car). So YTA, just stay at the car until she comes back.

In OP’s shoes, imagine how absolutely awful they would have felt if they’d just left and something horrible happened to that child. Imagine seeing “baby dies after being left in car in parking lot” and knowing they could have stopped it.

The only right answer here is don’t—

It’s really tempting to say NTA but considering OP acknowledges that it was 50F outside and the mom was gone for 5-7 minutes I’m gonna say YTA. If that child ends up in foster care you’ve done a lot more harm than good.

This is an awful situation where society has failed OP and mom.

OP is right it *is* illegal, but we should have better solutions then police in instances like this. The mom shouldn’t leave her kid, but childcare ain’t cheap and we don’t know her situation.

So, what we have learned today is:

-Do not leave your child unattended in a car
-Do not call the cops on someone, be a good human and offer to watch their child