Any lottery winner could tell you that unexpectedly coming into a large sum of money will immediately bring people into your life who are looking for a handout. But things can get complicated when you’re dealing with people who are already a part of your life, particularly if you’re in a situation where you were already splitting some financial responsibilities with them before you hit the big time.

One anonymous user on Reddit’s AITA is dealing with just that after inheriting $4 million from her grandfather.

“My grandpa passed away a few months ago and I inherited a little over $4 million from his estate,” she wrote. “I had no idea he had that much money and was honestly not expecting to receive anything, as I assumed it would all go to my mom.

Rather than blow through her new funds, OP decided to be relatively responsible.

She did the calculations and realized she could easily live off $40,000 a year for the rest of her life, so she quit her job and decided to pursue hobbies like art and music and gaming instead. “I’m pretty introverted,” she noted, saying she would be happy staying at home all day doing whatever she likes.

But her boyfriend thinks it’s unfair she’s only supporting herself with her inheritance and refusing to cover his expenses, as well.

“Ever since I inherited the money, my boyfriend has been pressuring me to cover all of the rent and utilities (about $1200 a month) for our apartment and start putting money away into a joint savings fund,” she wrote.

She added that she’d feel differently about acquiescing to his demands if they were married, but at this point, they’ve only been together for a year and a half.

“I still pay my half of the rent every month and have started paying for a housekeeper to come in and clean a few times a week, so our apartment is nearly always spotless and looks great,” she said.

But in the boyfriend’s opinion, that isn’t enough, and he considers her “selfish for expecting him to still contribute to the rent when [she] could easily afford to pay for the whole thing.”

Her fellow Redditors were quick to officially declare her “Not the A-hole” in the situation.

“I’d be wary of marrying him though at this stage if this is his instant reaction to your finances,” warned u/playhookie.

“Yep, NTA and I wouldn’t be real excited about his attitude of wanting to be a kept man already,” agreed u/Claim312ButAct847. 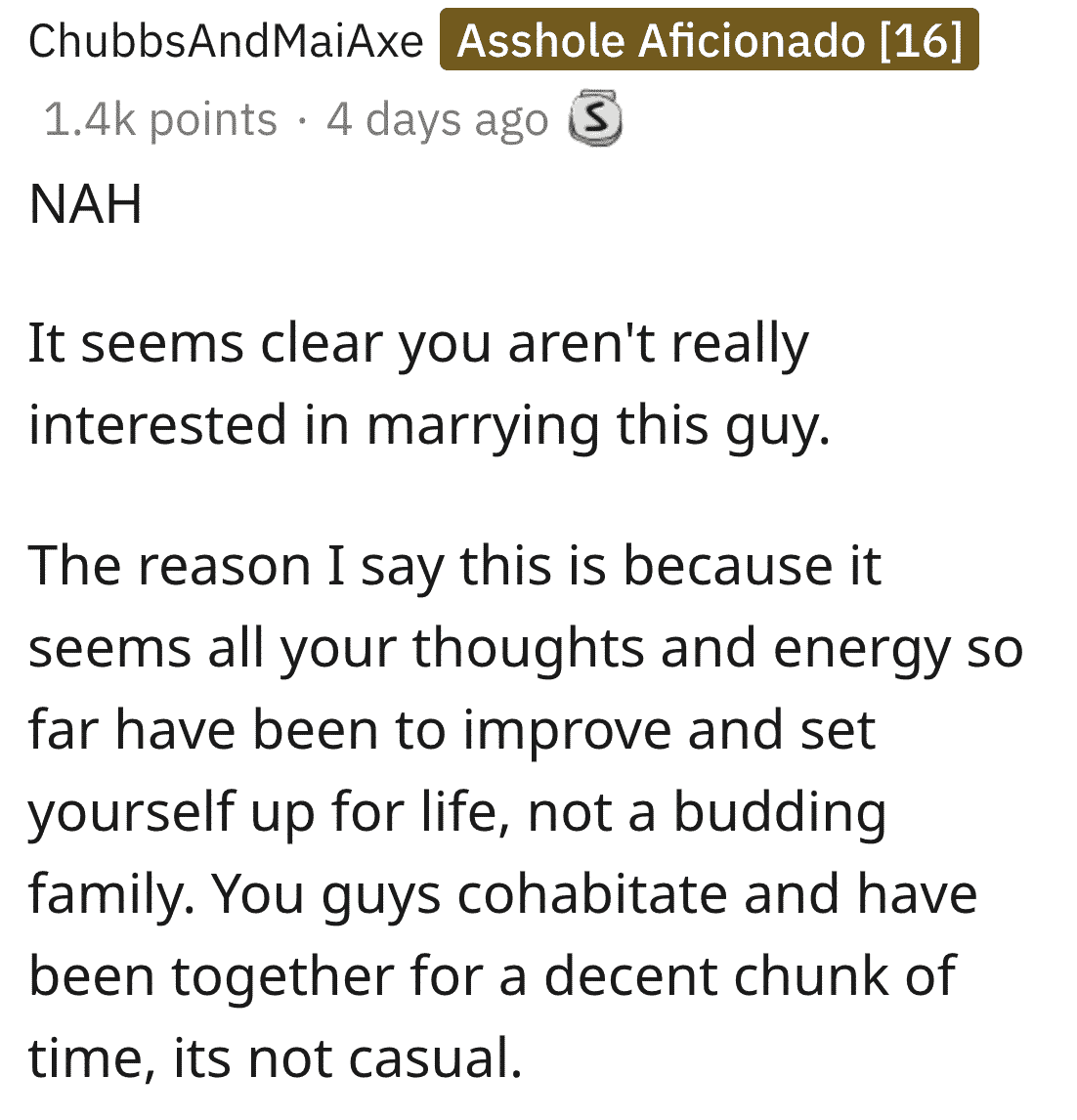 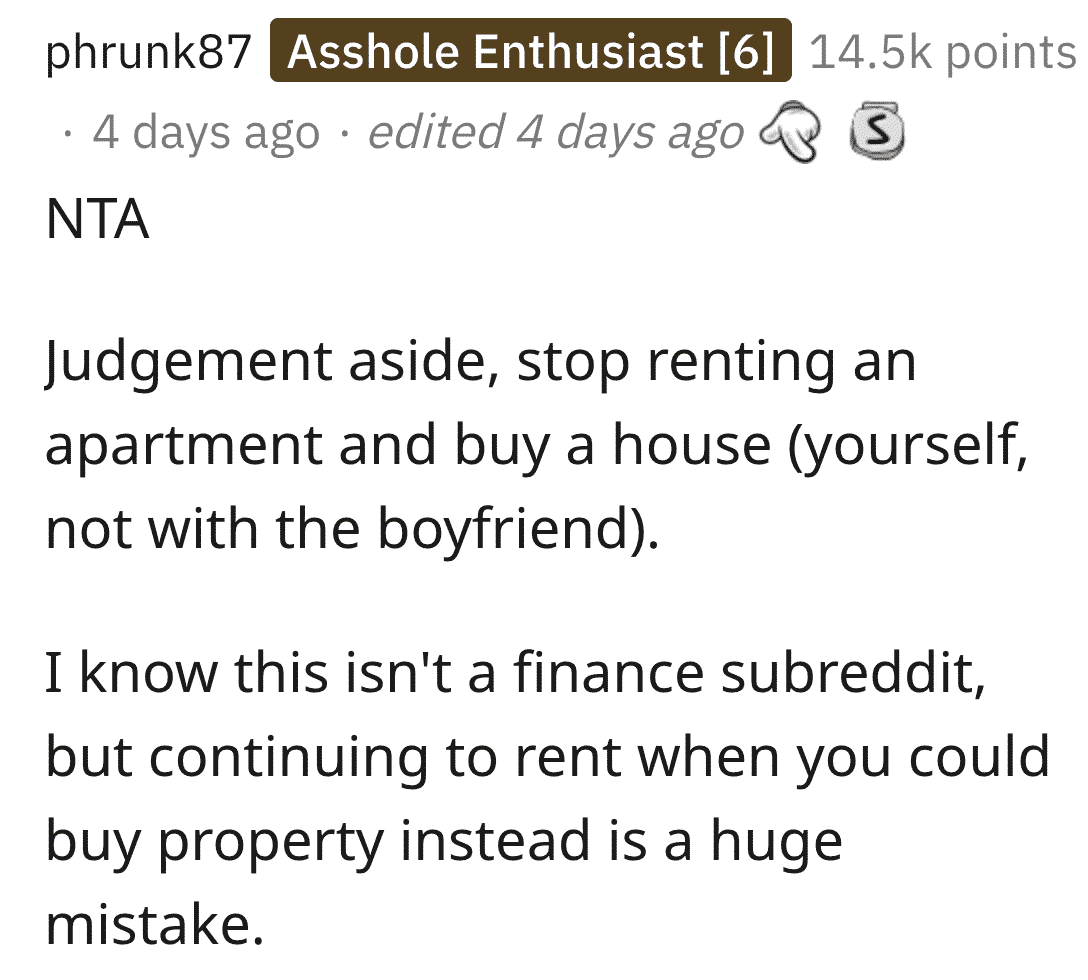 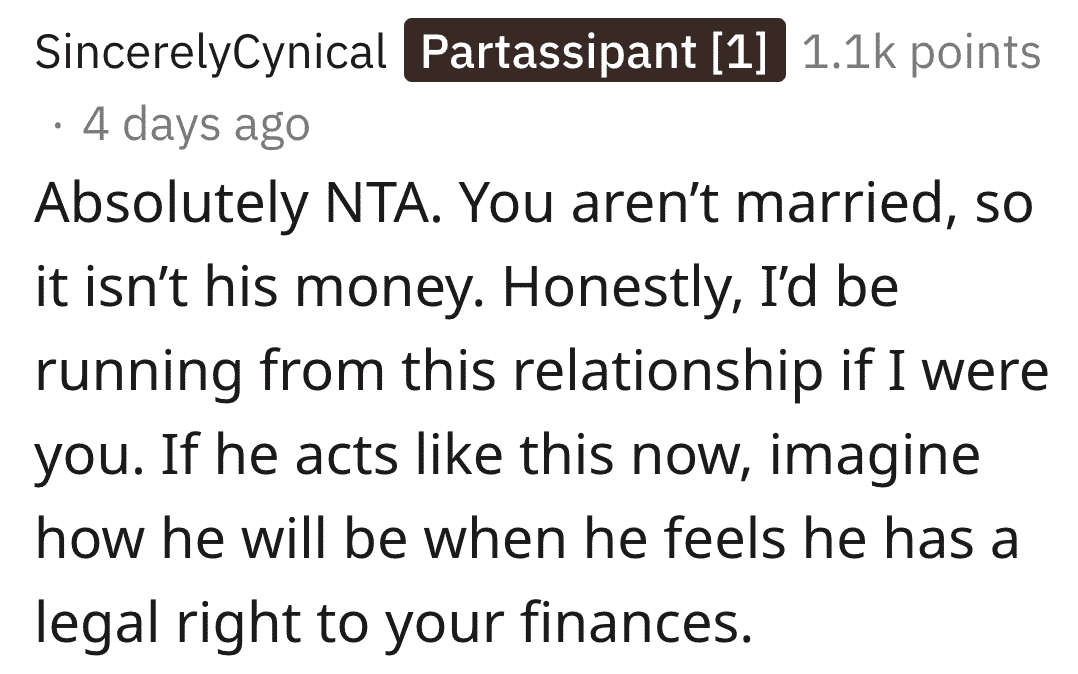 Some users did understand where her BF was coming from, even if they didn’t think she was being a jerk about the whole thing.

“Imagine your SO inherited $4million and quit their job to pursue hobbies and interests. You work 5 days a week, coming home to find your SO playing video games and painting, you’re still expected to pay half the rent and utilities,” posed u/b_rouse. “There will be resentment, with this big of a lifestyle change.”

While others straight up called her out as the a-hole, arguing that her behavior indicates she is clearly not interested in being with him longterm—and never was. 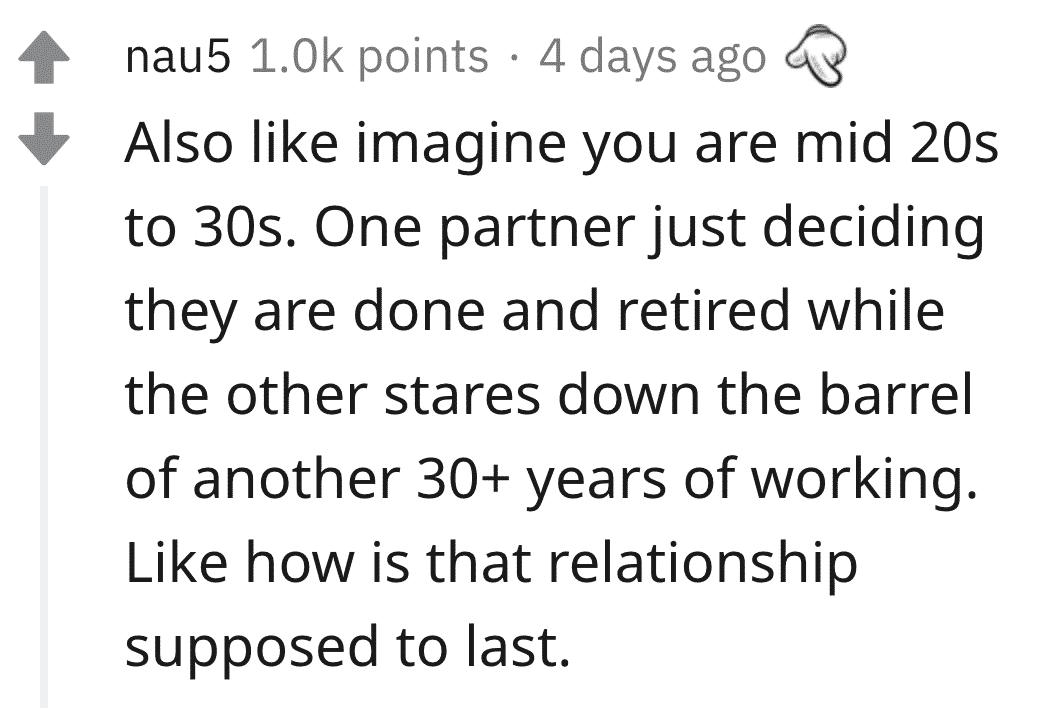 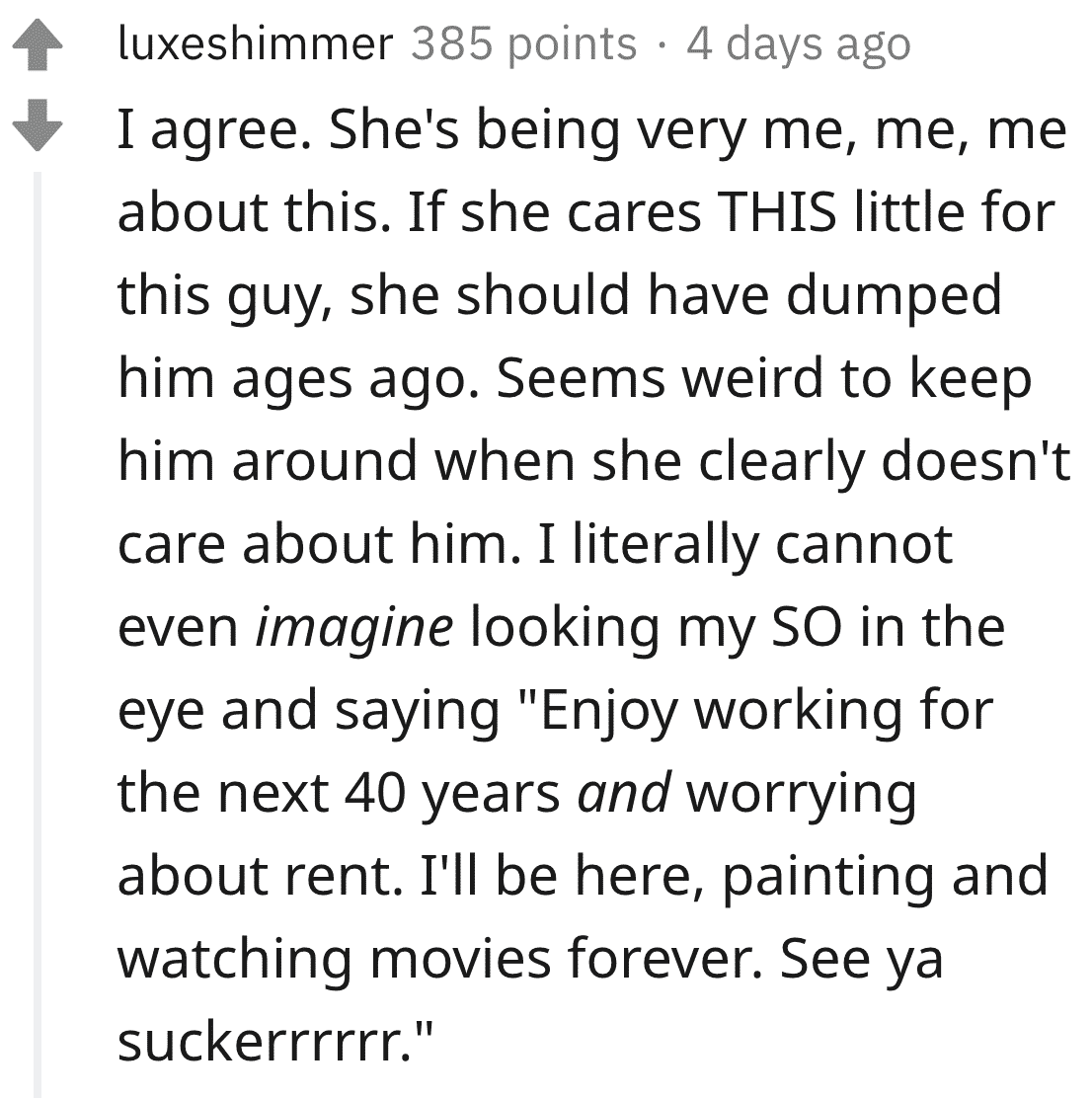 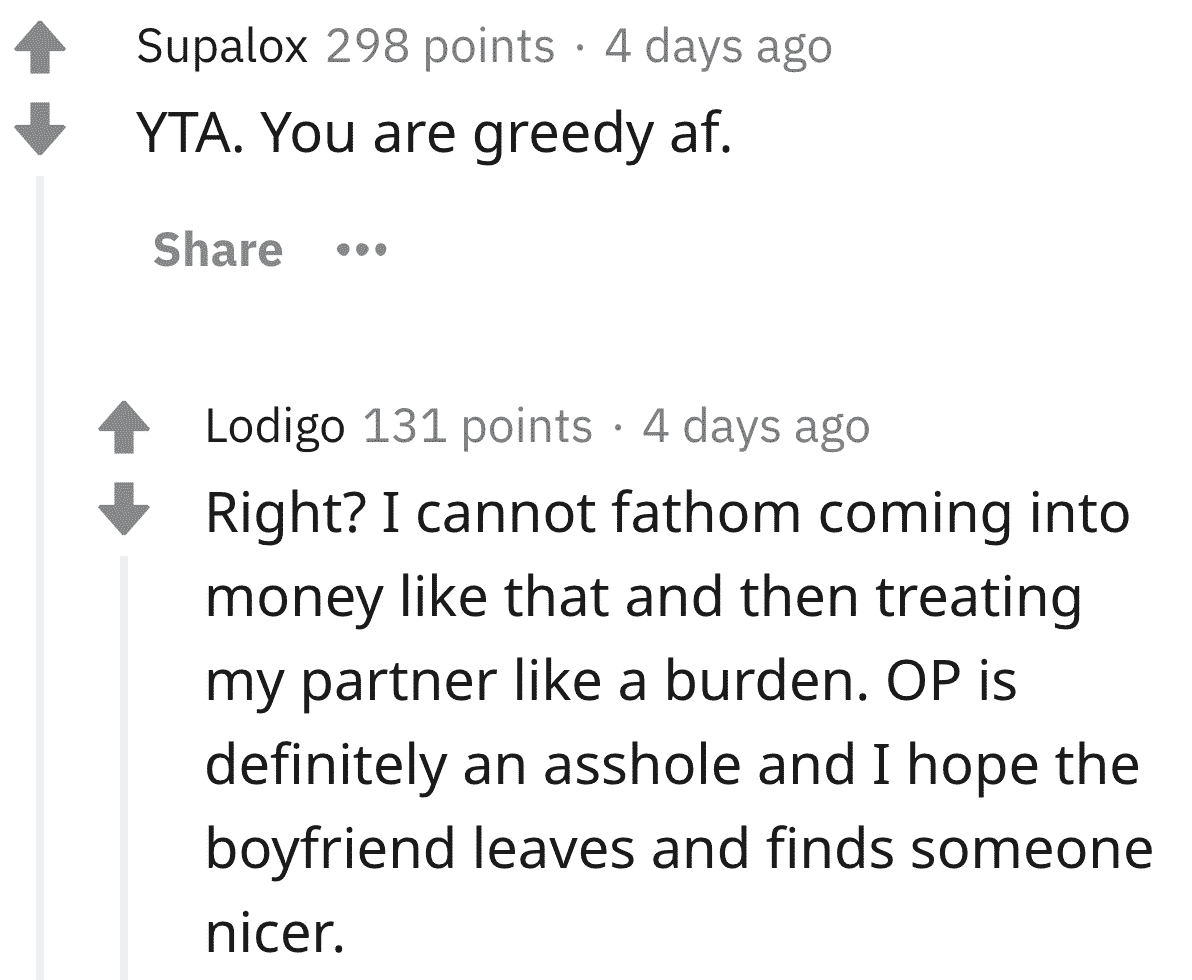 But the main advice, even outside of dealing with the boyfriend, was definitely important.

“With that kind of money in the bank you desperately need to see an estate planning lawyer,” wrote u/Fraerie.