Someone posting with the throwaway account u/tawayaitalifeskills is in deep doo-doo with his girlfriend after abandoning her at the airport and going on vacation alone after she arrived with an expired passport.

He shared his story on the subreddit r/AmItheA**hole, explaining they’ve been together two years, and though she is very competent in her work field, she still lives at home with her parents and seems to be missing a big chunk of life skills she should have developed by now.

He starts by saying that he has been comparing his girlfriend to his mom, who was left by his father when he was only 11. His mom didn’t speak English and had never even been responsible for paying the bills, but she figured it out.

“She’s a f*cking legend, but this experience imprinted on me the need that any partner I have in future has to be self-sufficient and capable of looking after themselves,” the OP wrote. His girlfriend can’t hold a candle to mom.

According to the OP, his girlfriend “doesn’t even know how to basic sh—t like post a f—king letter” and after she got her first car, she refused to learn how to care for it and it broke down because there was no oil in it. But the real issue was this:

We booked a holiday for 2 weeks to tour South East Asia. I asked her if her passport had at least a year on it. She said yes. At the airport, she found out it was expired after I had a look at it. I asked why she hadn’t checked to renew it: her dad was the one who had sent the application in 10 years ago and she didn’t know it had to be sent in to be renewed (wtf?).

The OP was not happy, and he boarded that plane without his irresponsible girlfriend:

I returned from the holiday (she didn’t answer any of my calls or text whilst I was abroad) and once I was back she chewed me out for abandoning her at the airport (its a 20 min train ride from our city center and the terminus is at the airport), that I should have double-checked her documentation since I know about this sort of stuff. I told her, sorry, but I ain’t pissing 3000 pounds up the wall because you didn’t bother to check the exact thing I asked you to. It’s really frustrating because I don’t want to treat a partner like a child like my dad did with my mum. AITA here?

This strikes me as a “validation post,” or one where you are pretty sure you did the right thing, but want to hear it from a bunch of strangers on the Internet as well.

The OP has been dating this girl for two years, however, and he seems perfectly aware of what she’s like. Most commenters seem to agree he was still in the right, and she’s wrong for being mad: 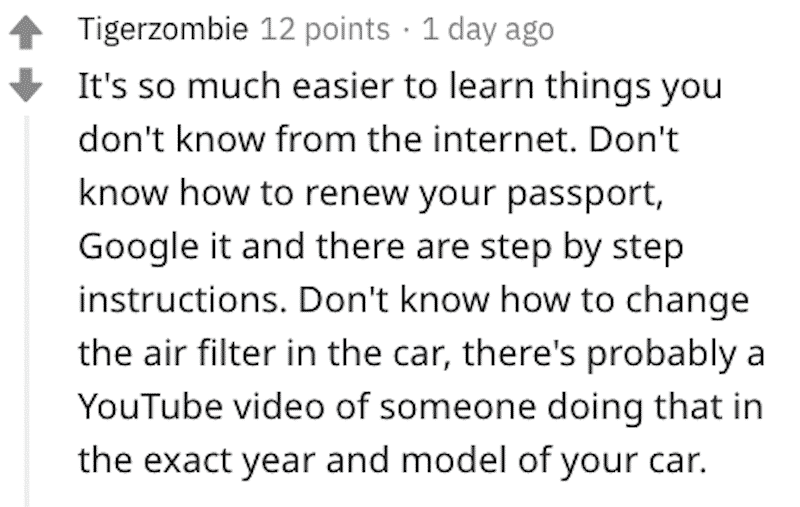 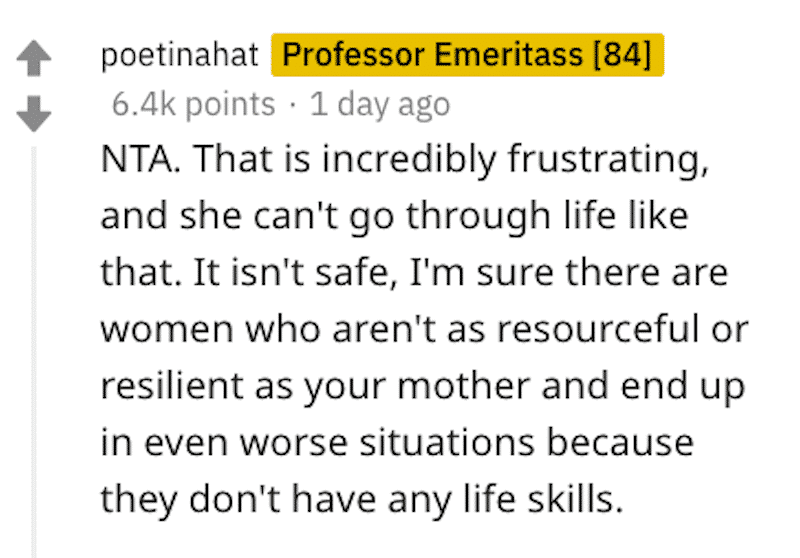 While others said “ESH” (Everyone Sucks Here), and asked OP why he continues to stay with his girlfriend when he’s well aware of her shortcomings—and when he makes them sound like a deal-breaker. 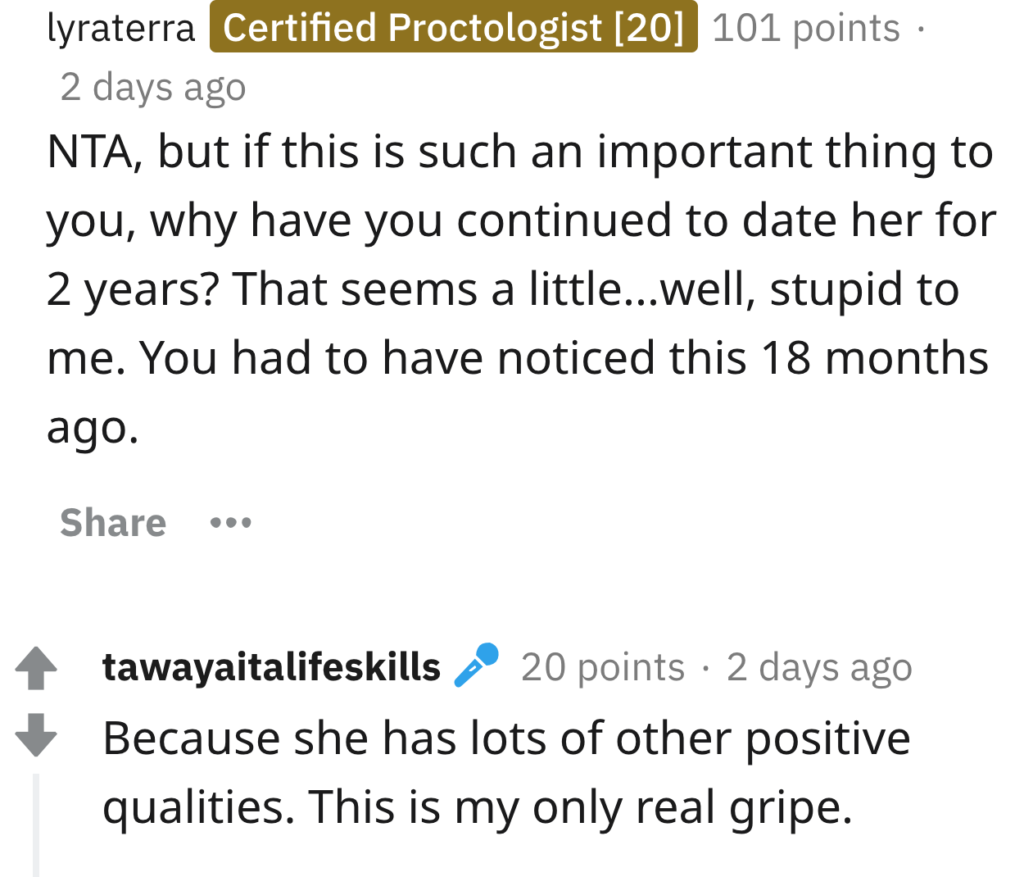 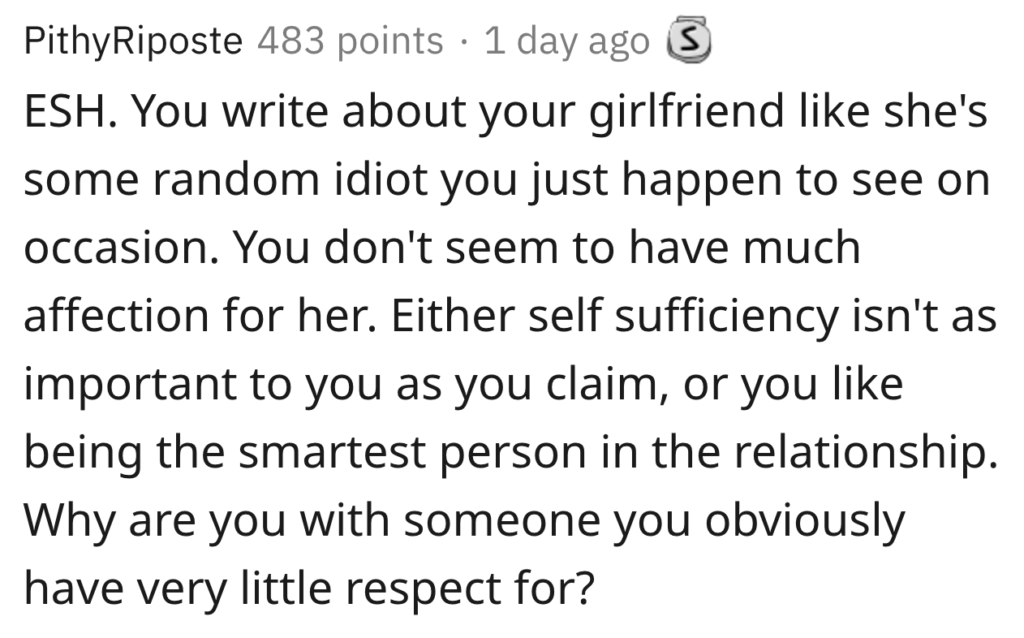 But the most relevant comment comes from throwntheheckaway1, who writes, “NTA but you’re also probably not compatible.”

If the OP really wants to be the adult in this situation, he’ll break up with the woman he ditched at the airport and she can find someone who wants to take care of her.