Not every post from Reddit’s r/AmItheA**hole makes it to Twitter, but when they do, you know it’s gonna be juicy. This one originally posted by u/fassaaai got super big on the bird app after it was shared by writer Hill Filipovic, who captioned it, “You guys, I think I’ve done it: I think I have found the biggest a**hole in the history of AITA. I just… have no words.”

Here’s the story: it’s written by a 33-year-old man who says he was on a business trip when he heard from his 32-year-old wife. She had driven herself to the ER due to “searing pelvic pain.” He managed to get to her by Saturday morning, getting into her room just before she woke up.

He writes that the doctor entered, “took a deep breath” and then announced that “the transvaginal ultrasound and CT scan results” showed she has ovarian cancer and would need a full hysterectomy, including removal of her fallopian tubes and ovaries:

That news jolted me from my chair. Because the doctor was effectively telling me that she wouldn’t be able to have kids after this, and after years of work, I thought we’d finally have a family.

I’m overwhelmed with emotions of anger, not just anger at the disease, but pent up anger form the fact that I had begged her to have kids since we were 26, but she refused for her career.

And now instead of becoming a real family, I didn’t even know if she would remain the woman I married, whether the last picture of us together would be last time I’d remember her looking beautiful, young, and carefree. Because the wife I as in front of me was already a different person.

What in the f*ck are you talking about? Your wife has cancer and you feel angry with her? It gets worse:

My wife started to grab my hand and say “ We’ll fight this and we’ll adopt.”

But I shook my head and turned to walk out the door. I still had my suitcase in the car so I drove to a hotel because I didn’t know if my wife was going to end up being discharged or what.

At the hotel I was at least able to get out of reactive mode, but I was still so disappointed that our dream of a family was over.

I finally was able to get a grasp on all my emotions and feel more like my normal self in that I knew exactly what I felt about every aspect and how I would react to it from here on out.

I get a call from my MIL saying that if I was at a hotel or “ wherever else” I should just stay there.

He then asks if he’s the a**hole for walking out on his wife after learning of her cancer diagnosis.

“I wasn’t going to expel the cancer if I stayed that night but I did at least make myself aware of my situation,” he adds. “And I feel I have a right to be angry that my hope of biological kids, the only kind I ever wanted, is rapidly fading away.” 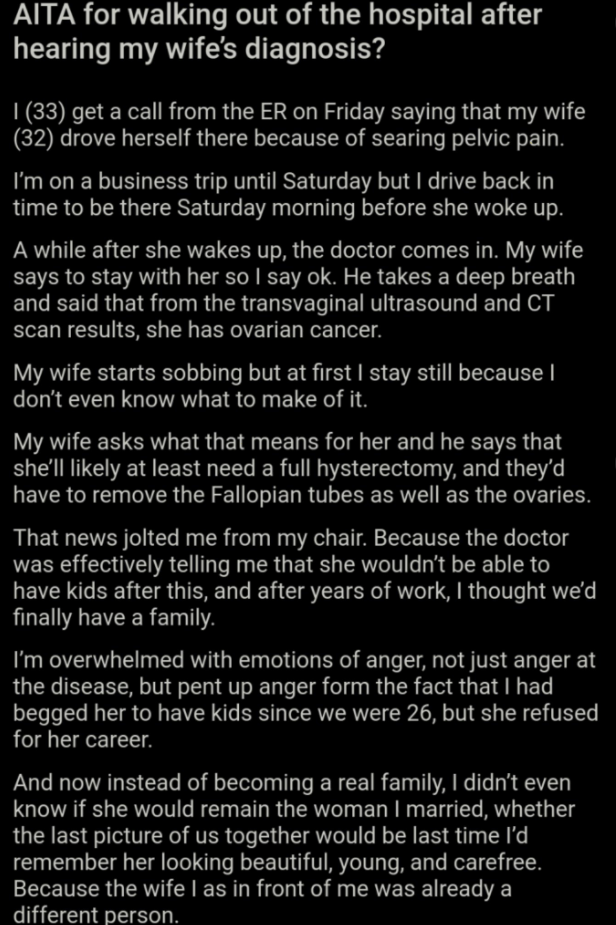 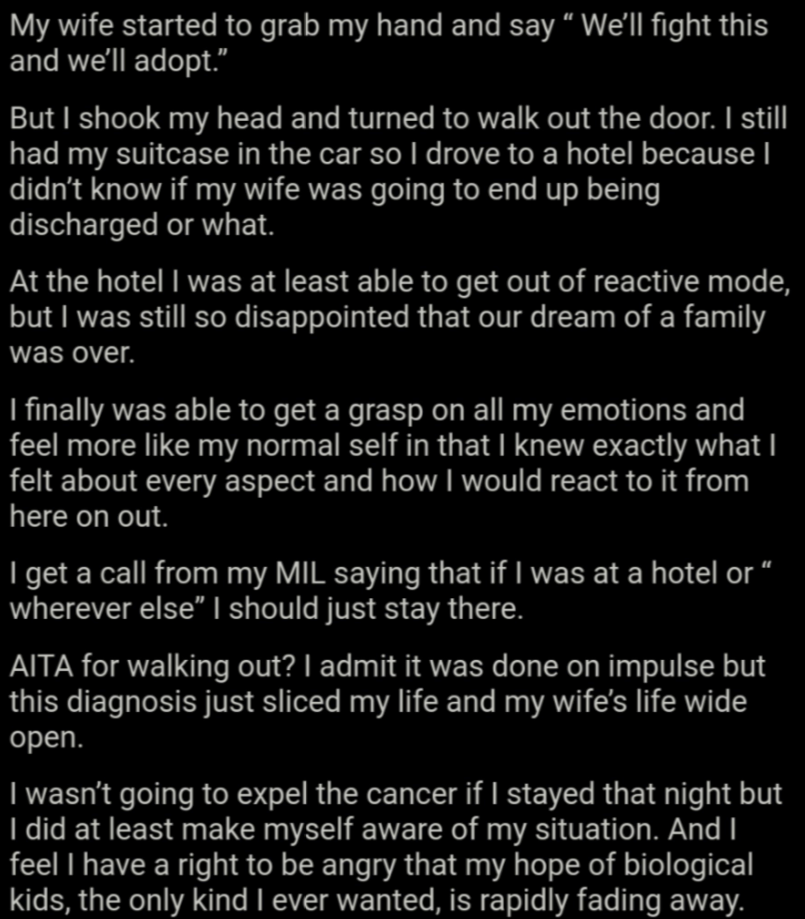 There are so many ways in which this man is the a**hole that it’s hard to even break them into categories, but commenters sure tried: 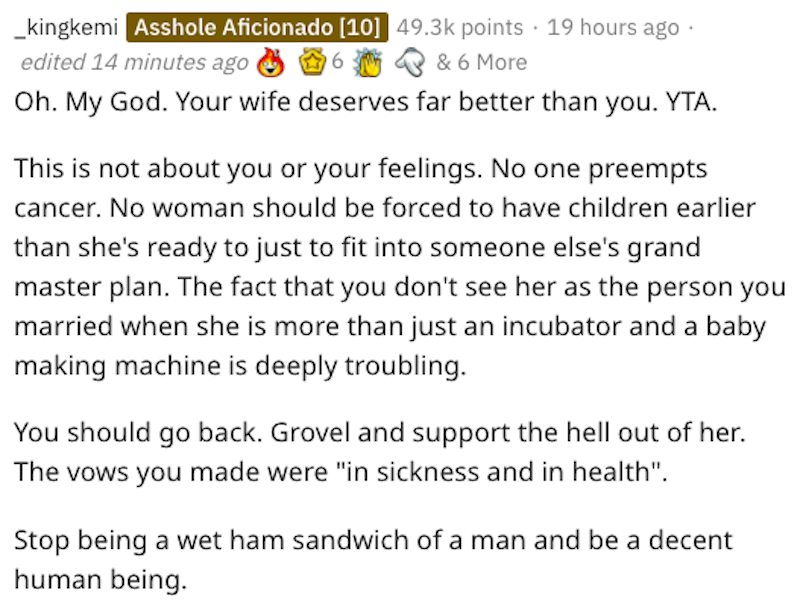 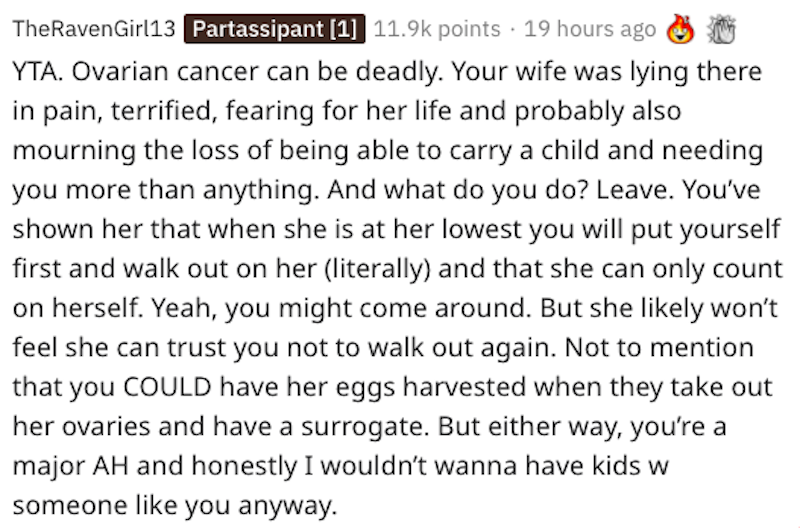 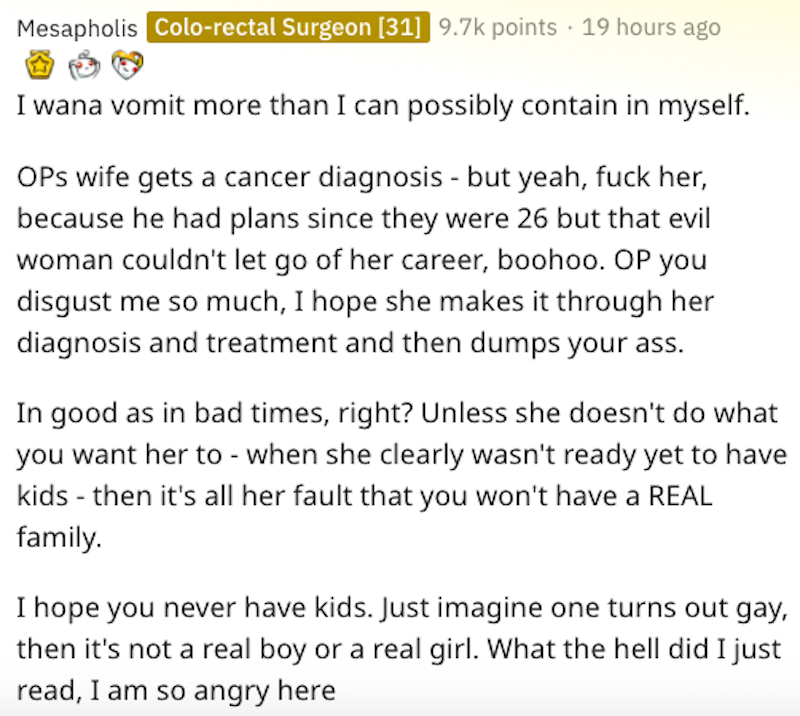 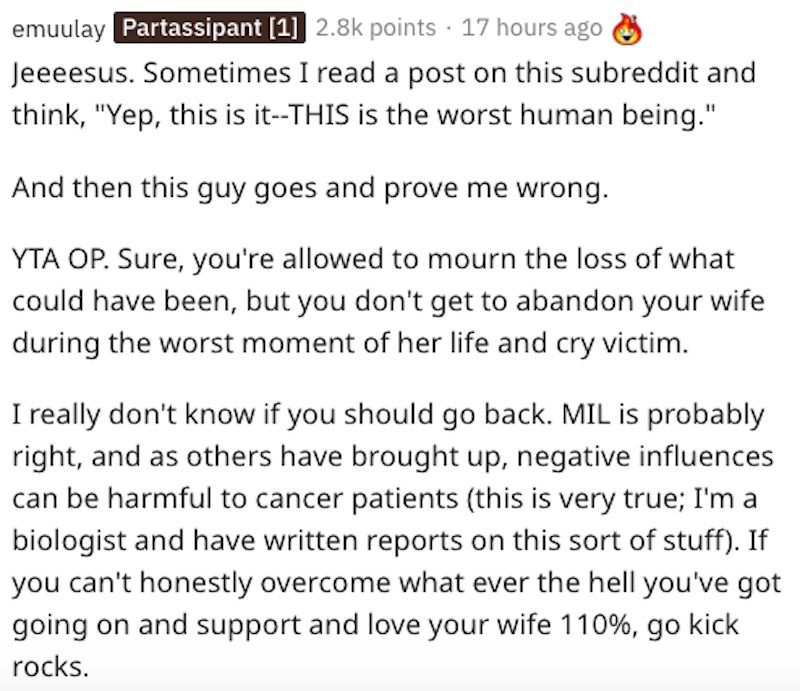 There is some good news. This post is almost certainly fake, as one person that claimed to be an RN who worked in oncology explained, writing, “Calling fake. Am an RN and you don’t get a cancer diagnosis like this. A CT can show a mass, but it’s just that… A mass on a CT. You need biopsy and staging, none of which happen in an ER.” 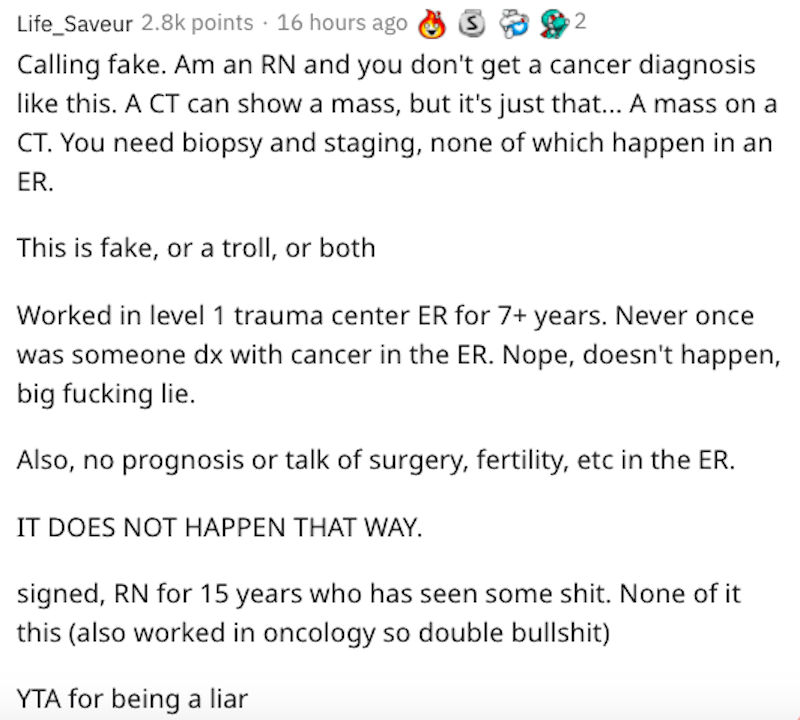 So, this guy is actually just an a**hole because he went trolling for attention and got it. At least we all got to unite for a moment in hating him. Thank you, Internet.