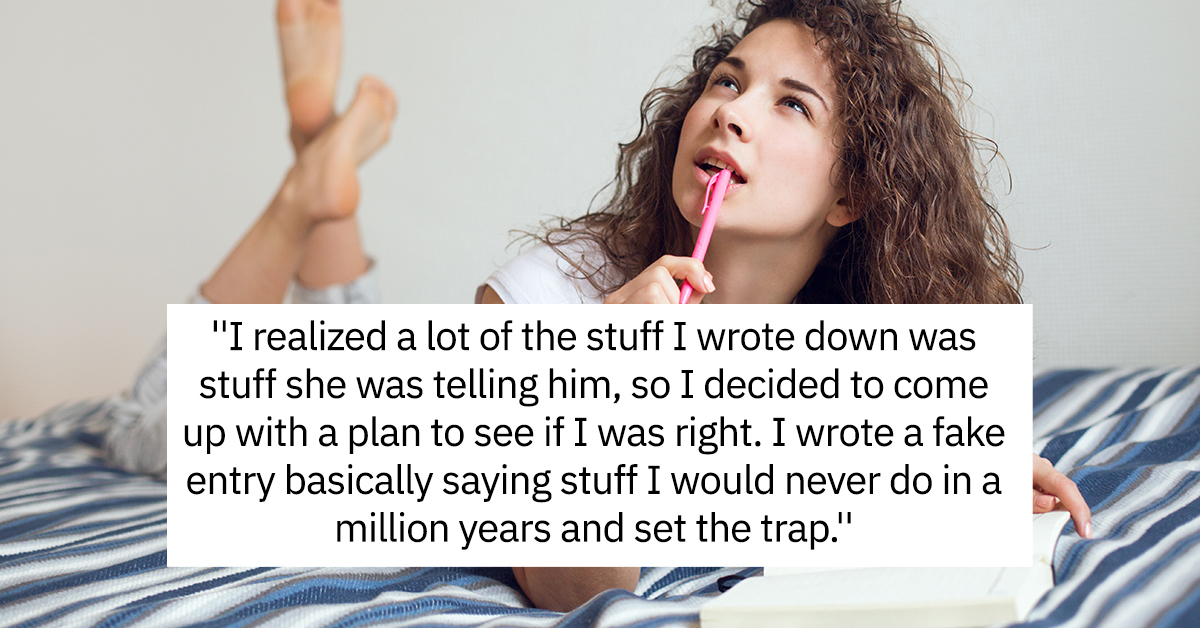 Journaling can be great for your mental health, especially during times of stress. There’s something magical about putting pen to paper and letting your ideas and feelings flow. Whether or not you end up keeping a diary to look back on or just throwing out those pages when you’re done, journaling is therapeutic—and should remain private.

One Redditor wrote a post about how she recently discovered her stepmother has been reading her diary—and how she set a trap to catch her in the act. Too sneaky?

The OP, a 17-year-old, has been quarantined with her dad and stepmom because her mother, who is a doctor, was “super paranoid” about her family living with her during the pandemic. Since things where they live are now slowing down, her mother is letting them stay with her again.

In the meantime, the OP stayed with her dad and step-mom. Her stepmom “has known me for two years and our relationship has always been weird. She’s a nice person but she can be pretty mean and childish if we do something she doesn’t like. She also has a tendency to run to our dad if she hears something bad about us.”

“Long story short, I have a diary and I keep a lot of private stuff in it. Dad called me a few days ago (we were visiting with our mom) saying he has to talk to me when I come back. Apparently I was in trouble because of something I apparently said to stepmom.”

However, when the OP’s dad told her what her stepmom said she said, the OP immediately recognized that she had written it in her diary—not said it aloud.

“I realized a lot of the stuff I wrote down was stuff she was telling him, so I decided to come up with a plan to see if I was write. I wrote a fake entry basically saying stuff I would never do in a million years and set the trap.”

“Dad calls me while out visiting with friends, and when I come back he grounds me for what I ‘did.’ Stepmom comes in later, apologized and said it sounded ‘concerning’ and she had to tell. I told her it was fake, knew she read my diary and refused to speak to her. My dad came in and tried to talk to me and I told him that stepmom was reading my diary and he didn’t believe me. Now I’m with my mom, and I don’t know if what I did was fair. I felt it was the only way to prove my point, and I didn’t know what else to do.”

Was it fair? Redditors chimed in with support and advice.

“That is a gross invasion of your privacy. And a clever move on your part to confirm her prying. She’s the A for sure,” said Shandoma.

“Yes it’s a gross invasion of privacy. And in this case, she’s not the birth mom and likely was snooping through pure idiotic curiosity. BUT even great parents can make mistakes and come on too strong, even when they went snooping with the purpose of ‘making sure they’re not making bad decisions.’ So cut her some slack in the long run and if it takes you telling her that further invasion of privacy and personal space will mean severing the relationship, that’s what some people need to hear,” said Tpellz.

“You are in a tough spot because the adults around you are failing you and treating you unfairly. Don’t let your stepmom make you feel guilty for violating your privacy and lying about it, and recognize your dad should be making sure your stepmom follows appropriate boundaries with you. Make sure your mom knows what is going on. She may have to step up for you with your dad and his wife,” suggested bubbyshawl.

“Let a bit of time pass and then write one last page in it saying how you can’t believe she betrayed your trust, she violated your privacy, how you find it hard to like her when she lies to your dad about you and you wonder if she’s threatened by you or something. Stepmum will find it, read it, and if she has a shred of decency she will apologise and own up to your father, but most likely she will run to your father and twist the story to paint you as the bad guy, and if/when she does show him the page – proof you’ve been telling the truth the whole time, photograph the page on your phone too with something like a newspaper showing the date you wrote it too so she can’t claim you went in and wrote that stuff after the fact. For whatever reason this woman is threatened by you to the point she’s repeatedly violating your privacy to stir trouble between you and your father. He’s clearly letting her do this so it’s up to you to to expose her bs since your father lacks the will or spine to have his daughters back,” advised HellcatPaz.

“It might help to find a time to sit down with your dad and tell him how your relationship with stepmom feels to you. It sounds like she’s pretty manipulative, and it’s not okay that she’s acting like the child when she’s the adult in the situation. Tell your dad how you feel about this invasion of privacy, and of how you feel that he doesn’t trust you. If his reaction is dismissive, or anything short of an apology on behalf of stepmom (along with a promise to have a serious talk with her about how she treats you), then walk away. You don’t have to spend any time with him if you don’t want to. Sometimes people need some no-contact time to understand that you’re serious,” said ringringbananarchy00.

“This is the kind of thing kids lose trust in their parents over. You even explained to your father what was happening and he still sided with his wife, your step-mom, over you, his own kid. Wtf? What you write about in your diary is not your step-mom’s business. The fact that she reads it and tattles to your father about it is extremely concerning. Unless bio-mom is a crack addict or something, I would stay with her as much as possible. Hell, even let her know what’s going on. And take that diary with you! And speaking of diary, can you transfer all of your not-‘fake’ entries into a diary app with security options like passwords, pins, patterns, etc? This would help make “expressing your feelings” and privacy a lot better,” Kaiserbeams suggested.