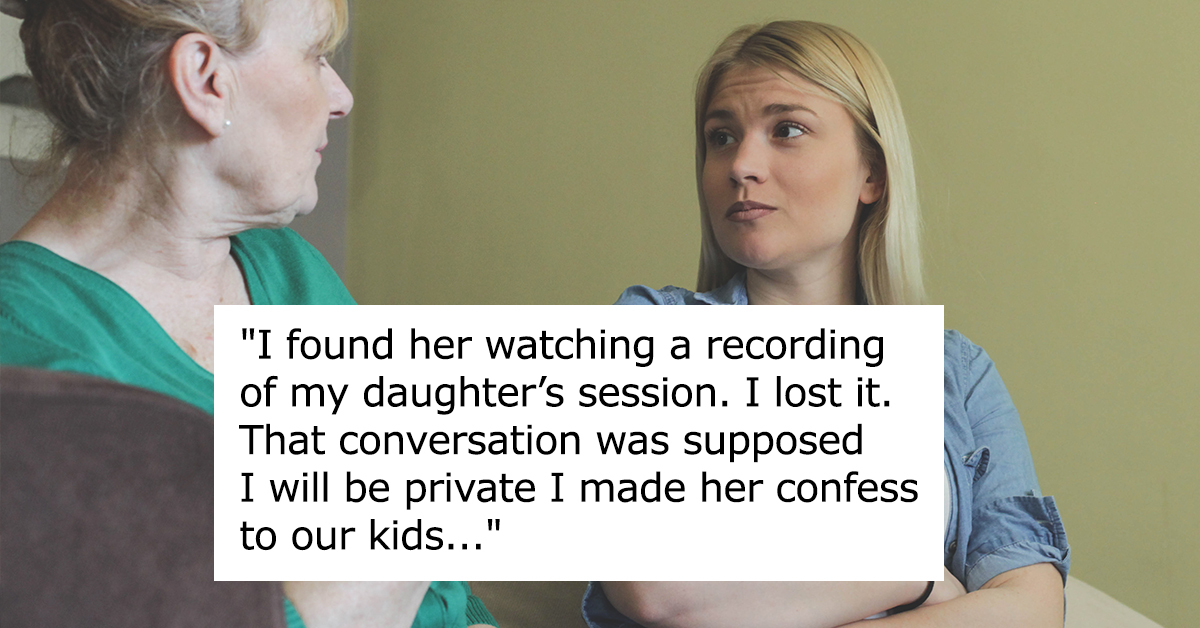 When I was a kid, I kept a diary. It had three locks and a message on the first page: “DO NOT READ. I WILL DO FINGERPRINT ANALYSIS AND FIND YOU.” I hid it under the mattress. Everyone needs some privacy—even children. Whether it’s a journal you can write in or someone you can talk to in confidence. And if someone violates your privacy, it can feel incredibly traumatic—especially if it’s a parent.

That’s just what happened to his two children, writes one Redditor who discovered his wife watching recordings of their daughter’s therapy session.

“I have two children M20 and F19 and ever since the world went to hell, I got them therapy sessions at their requests because they said that this was taking a huge toll on them,” the OP writes.

“On Wednesday when my daughter went to attend the zoom session my wife had left to go take a nap. I didn’t think much of it, but she came back exactly 3 hours later after both of them finished looking sad. Today the same thing happened and when I went to wake her up for dinner today I found her watching a recording of my daughter’s session. I lost it.”

“That conversation was supposed [to be] private we had promised our kids that we will respect their privacy and do our best to help them when they need it.”

Wow. I mean, that’s an incredibly violation. There is absolutely no reason to spy on your children’s therapy sessions. These are conversations with a trained professional and no one else’s business—and what a way to destroy the trust between you and your children.

The OP made his wife confess to spying on the therapy session. He says “they were heartbroken and they hate her. She claims that it’s my fault but she dug her own grave. Both of them feel betrayed and don’t want anything to do with their mother.”

“For the people wondering about her intention for spying on the kids. She hasn’t said a word about it. Just got up and left saying that ‘I don’t need to take this shit.'”

Redditors were outraged over the situation and had a lot to say about this violation of privacy and trust.

“What your wife did was so violating. To anyone of any age, knowing your parent did that to you us not just heartbreaking, it is scary. The point of therapy is to be able to say things in a safe space where you don’t have to worry about others hearing it. She robbed them of that,” said theartbook35.

“You are am amazing parent. Not only did you take your kids serious in their need for help and set them up with a therapist, but you further kept your promise to respect their privacy. Their mother however might have lost your kids trust forever. I can’t get my head around people who think it’s their right to listen to everything their kid says. It’s hard enough opening up to a therapist, being spied on is one of the worst things you can imagine when you brought up the courage to talk to someone,” observed teilzeitfancy.

“Obviously, as most others have said this crossing of boundaries is unacceptable and immoral. But what concerns me more is the premeditation involved. This wasn’t just spur of the moment curiosity or misguided maternal instinct (both still unacceptable) she had to plan, acquire a camera, sneak into their rooms to install it at a time when she wouldn’t be detected. Seems unlikely to me that this is the first time she’s stomped your kids’ boundaries. Therapy should be a condition of any forgiveness process. And this might need to be family therapy rather than solo as you can’t trust her not to lie to the therapist,” agreed BornElk4

“My mom forced me to go to counseling because I was having issues with her in middle school and afterwards told me to tell her what I said in those sessions with the threat of using her school board position to see the files. It’s a serious violation of trust and it’s extremely unhealthy to not even have mental privacy,” said juana_eat.

Redditors also wondered if the mom might benefit from some therapy herself or if there might be other warning signs.

“I suspect that this incident is one of many, many, many incidents of your wife exerting control on your kids. Does she override your kids decisions for her own preferences (especially in low stakes decisions). Does she try to control their friends, which jobs they hold, what schools they go to, what hobbies are acceptable. Does she dictate their clothing style choices? Is she trying to dictate what professions the kids want in their future? Does your wife see your kids as their own people or does she see them as an extension of herself? Are they allowed to close their bedroom doors? Does your wife go through their belongings without their permission?”

“In short, are your kids allowed to be their own people with their own hopes and dreams? Are they allowed to exist without her in their life? Will she allow them to move away from home and exist independently? Or does she keep them nearby where she can stay involved in their lives? Does your wife allow your kids to be less than perfect? Or does she try to make your kids achieve in every area so she can boast about it? How much pressure does you wife put on your kids to achieve and not embarrass the family? These are all signs of emotional abuse and Narcissism on the part of your wife,” said user LadyLightTravel.

The OP updated his post, explaining that his “soon-to-be ex-wife” is staying at a friend’s house: “My kids are actually grateful that I did what I did because they now realised that their mom is a control freak.”