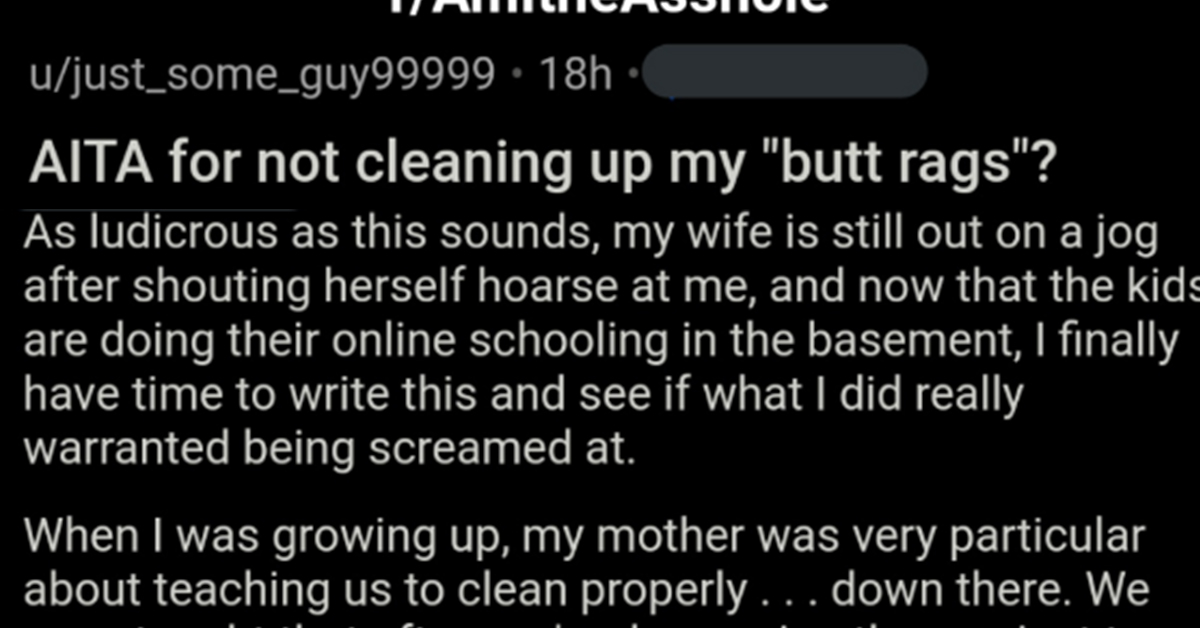 This Reddit user has nuked their account, which was posted under a throwaway name anyhow, but the judgment against him remains up on r/AmItheA**hole and it’s…not good. The man who wrote it say he sat down to write his story and ask for judgment because “as ludicrous as this sounds, my wife is still out on a jog after shouting herself hoarse at me” and he doesn’t think what he did “really warranted being screamed at.”

He gives us the set up:

When I was growing up, my mother was very particular about teaching us to clean properly . . . down there. We were taught that after you’re done using the rag, just toss it in the corner of the shower, and my mother would pick them up while doing laundry. I understand to some people this may seem a little strange, but it’s just how things were in my house.

I don’t know why your mom taught you not to clean up after yourself, but okay. He says his wife is a stay-at-home mom, so he shoves most of the housework onto her. She’s also taking care of three kids, but she’s expected to everything except the dishes and taking out the trash.

That includes picking up his “butt rags” as she calls them. His wife has gotten increasingly frustrated with this chore and has been asking him to deal with them. He says he will if she does dishes. 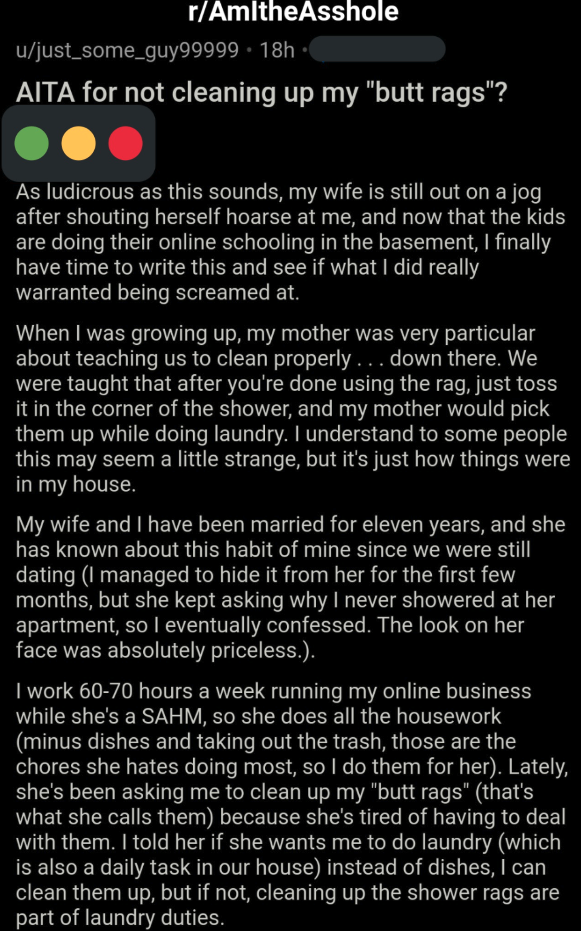 Everyone but this guy can see how this would be an issue that would blow up, but apparently he didn’t see it coming. Which brings us to the moment where he might have been an a**hole:

This argument has been going on for weeks now, and it all boiled over this morning after I took my shower. I came down for breakfast, and my wife asked me if I cleaned up my “butt rag”. I told her if she was planning on doing the dishes after breakfast, I would be more than happy to take care of laundry today. We bickered back and forth for a few minutes, and that’s when our 6-year-old daughter piped up with, “I’ll clean up Daddy’s butt rags for you, Mommy!”

I burst out laughing, but my wife went ballistic. She told me I should be ashamed of myself thinking that this was funny, and got even more mad when I suggested our youngest is now old enough to start earning some money for doing chores, anyway, so why not? We pay our son to do yard work, and my other daughter gets paid to clean the windows, so our youngest would want to start earning her own allowance eventually, right? My wife flat out told under no circumstance will she allow our child to clean up my “butt filth” (new term she invented just this morning) and then went out for a jog. She’s been gone for almost an hour, and I’m getting a little worried now because she’s not responding to my texts. 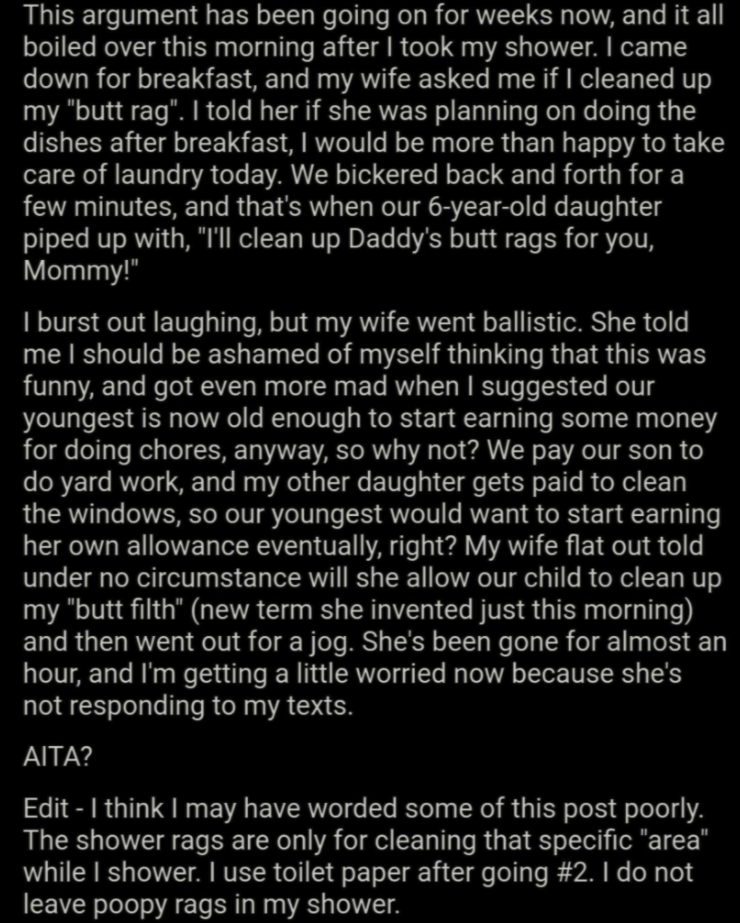 He edited to add that the rags are not applied directly to poop, he does wipe with toilet paper during the Event. They’re more of a scrub towel for the after-effects. 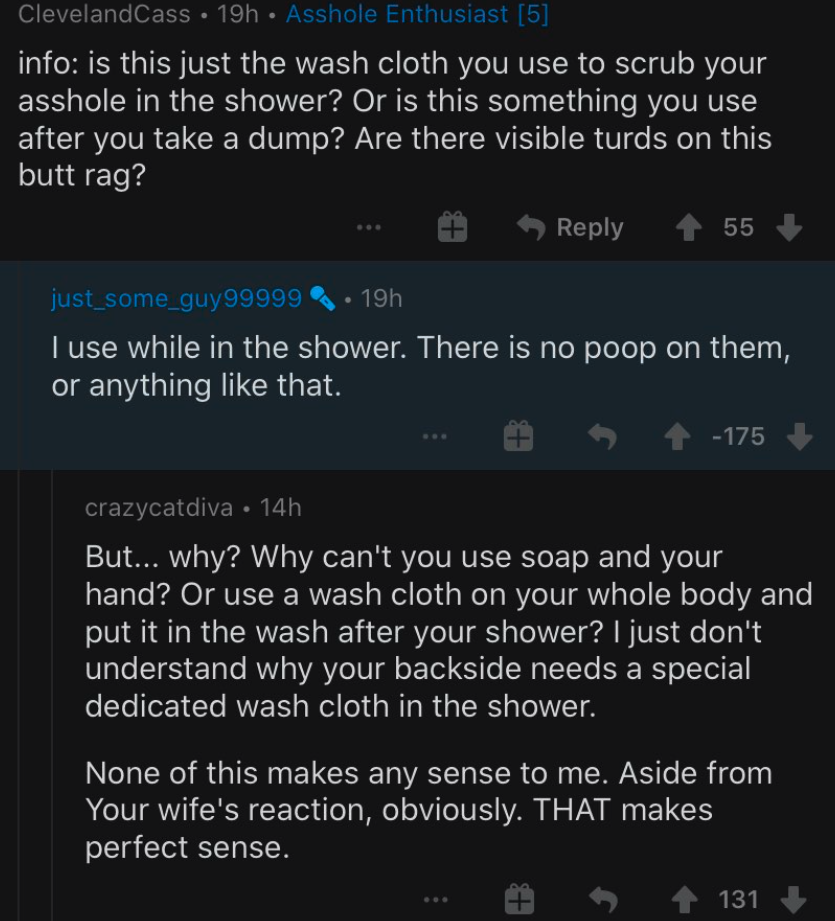 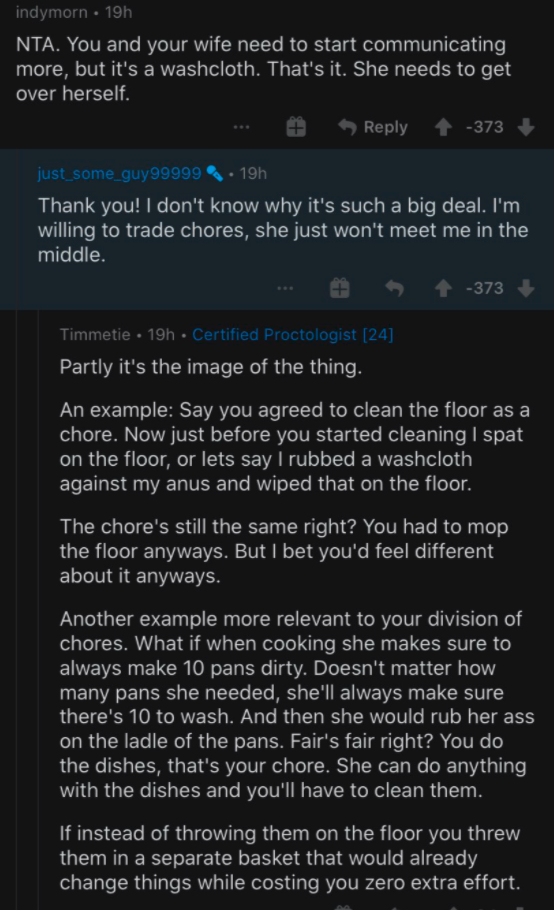 Almost everyone was absolutely sure that he was the a**hole in every sense of the word. His wife isn’t his mom or his maid, and his approach to resolving the issue was incredibly childish: 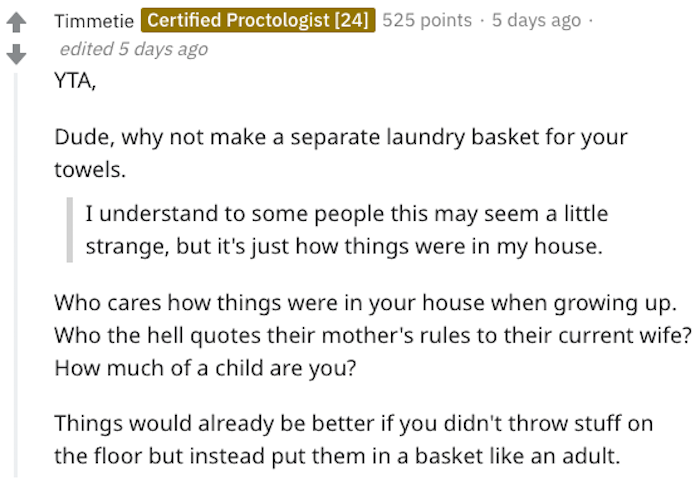 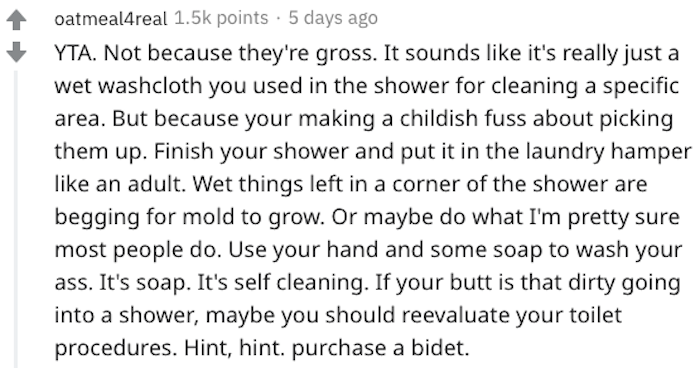 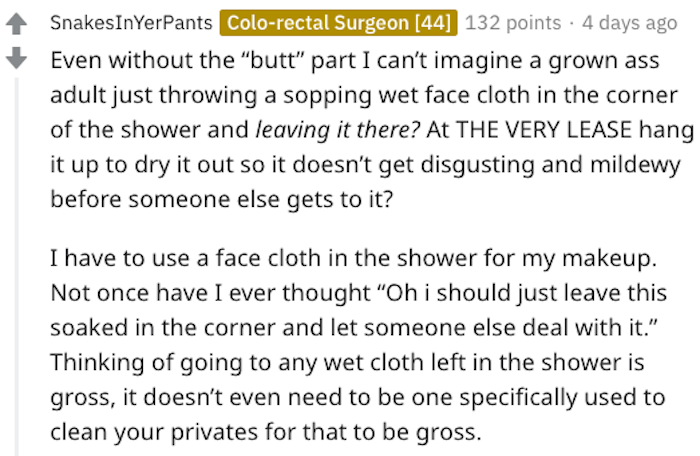 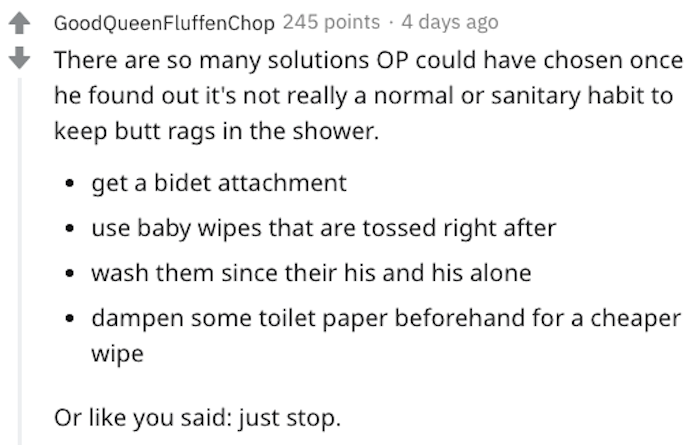 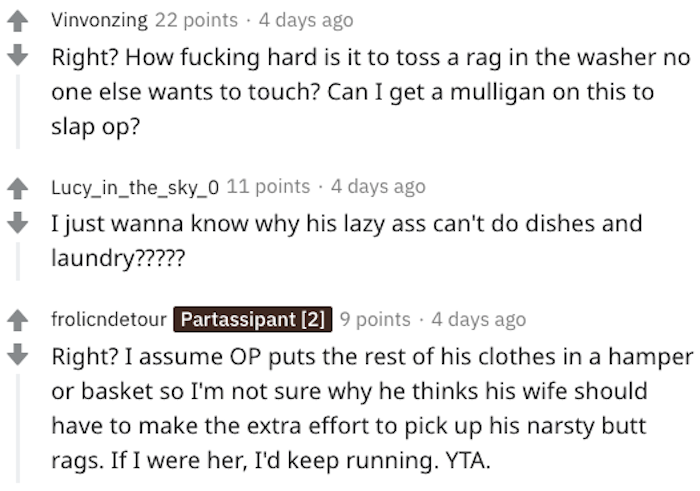 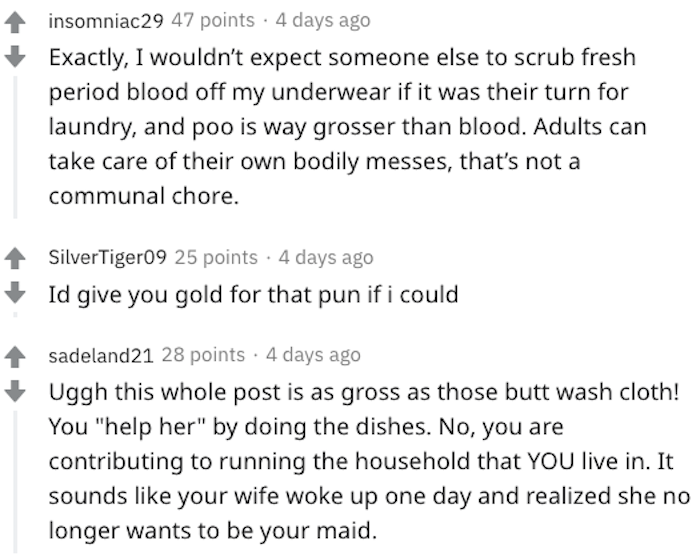 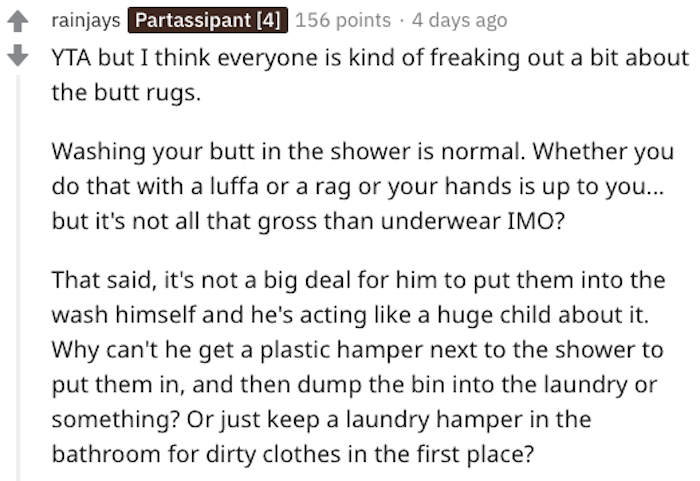 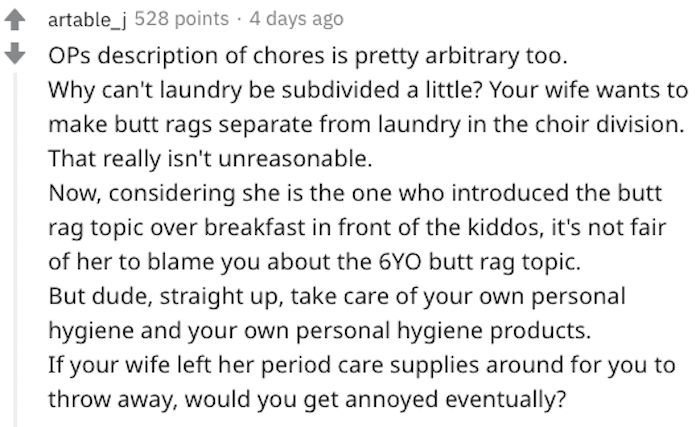 What I thought was odd that no one really commented on is that OF COURSE she is mad that he is trying to paid their kid to touch his butt rags! No one should be responsible for that except him, and to pass the duty to from his mom to his wife to his daughter is possibly even gross than the nasty rags. Grow up and get a hamper.

More best and worst of AITA: