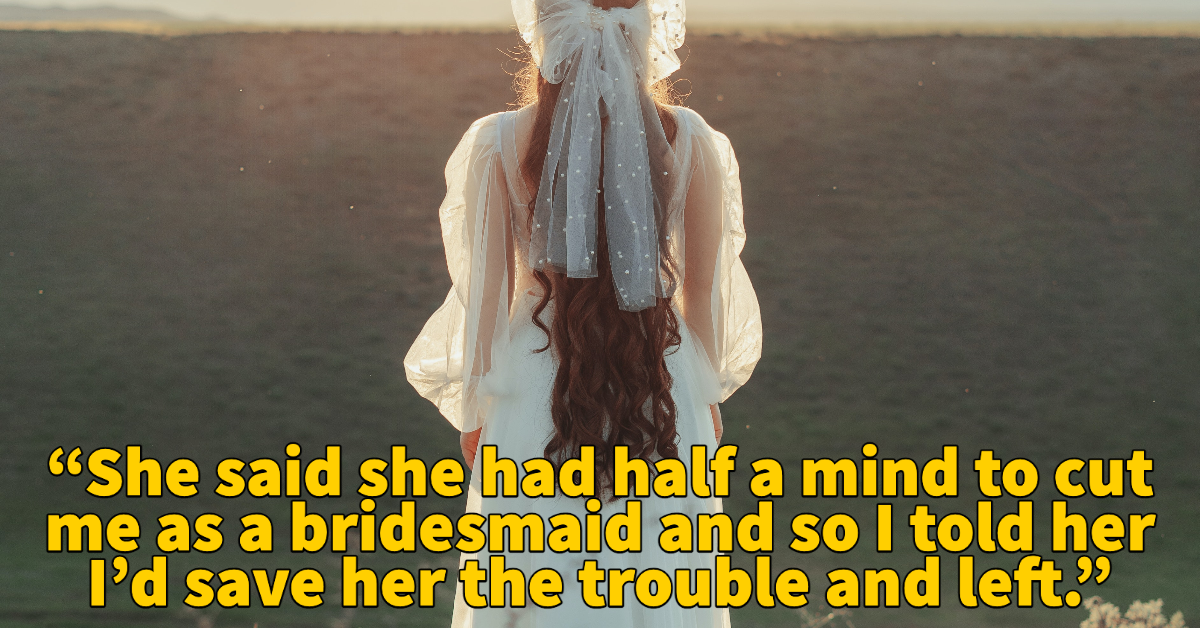 You know what? Things can go awry on your wedding day. The weather can be uncooperative, there can be wardrobe issues, the food can be gross, the band can suck, a fight can break out. You want the day to be perfect, but it’s okay for it to be as great as possible and not lose your damn mind if there’s a hitch.

On Reddit, one bridesmaid decided to bail on the bride after she had too much of her drama and her frankly abusive behavior. Was she wrong to get out of there?

“Okay, so, my friend has been planning her wedding for nearly 2 years and she wanted me to be a bridesmaid. Some things have gone down over the last couple of years, a lot of her friends drifted apart, some wouldn’t be able to attend for medical reasons and she fell out with a few. Out of the 9 bridesmaids she had originally planned, only me and 3 other girls were attending,” the OP writes.

“Day of wedding was hectic, bride got overwhelmed so myself and the other 3 bridesmaids basically whipped everything into order while she calmed down. Her hair stylist had cancelled so I reached out to a friend of mine and asked her if she could swing by last minute and help out. She did her hair and apparently the bride didn’t like it. The bands she was using were coffee coloured, not white (she didn’t have white) and the bobby pins didn’t match her hair colour and the ribbons weren’t curled right. At one point, she said to my friend ‘are you an idiot’ and I’d heard enough. I understand that it was stressful but there’s no need to name call someone who got all of their equipment last second and drove over 20 minutes to an event of someone they didn’t even know, as a favour, not even paid work (though I did offer).”

“I told bride she had to calm down and she couldn’t speak to my friend that way but instead she just ended up yelling at me as well, I told her we were all doing the best we could and she called me pathetic and said it was outrageous that I’d be lecturing her on the most important and stressful day of her life. She said she had half a mind to cut me as a bridesmaid and so I told her I’d save her the trouble and left.”

“The aftermath was insane! I had the other 3 bridesmaids calling me to tell me I was an AH and was so selfish I couldn’t put up with a little attitude for a few hours because she was stressed. Bride called me crying about how I betrayed her and how horrible of a friend I am, Brides mother (who didn’t previously have my phone number) called to tell me how disgusted she was at my attitude and even my boyfriend says I could have sucked it up and it was a total AH move to walk out like that. My stance was that high stress or not, I don’t feel like she should have been calling my friend names and I don’t think she should have called me pathetic. Stress isn’t an excuse to talk down to someone in my opinion, especially people who are trying to help, but I could be wrong.”

What did Redditors think? Was this an unforgivable bridezilla moment or was the OP too quick to bail?

“You’re never an a**hole for refusing to accept abuse. The way you go about that refusal can make you one, but in your case, all you did was remove yourself from the situation. You did nothing wrong,” said CreativeAirQuotes.

“NTA. Someone came last minute and helped her for FREE? And she had the audacity to act like that? Stress or not that was unacceptable. I hope your friend left too,” said Petty25betty.

“NTA. You don’t deserve to be spoken at like that no matter what the circumstances. You’re friend needs to remember what the day is actually supposed to be about & it sounds like she needs to learn some mindful stress relief techniques. You did the right thing by standing up for your other friend & standing up for yourself,” noted freesias_are_my_fav.

“The fact that the bride lost five bridesmaids leading up to the wedding speaks volumes. I really don’t understand people who expect others to accept abusive behaviour ‘just for a little while’ or because ‘it’s her wedding day’ or whatever. No one should have to tolerate abusive behaviour ever, under any circumstances. If a bride wants to have a nice wedding day, she should start by being nice to the people around her. No one has to kiss a bride’s ass just because she’s getting married,” explained My_genx_life.