This is a story guaranteed to make just about everyone mad on behalf of the poster, unless they’re also constructing long term, dangerous lies to trick their kids into eating sweet potatoes instead of Wonderbread. Redditor u/TroubleInGluten posted on r/AmItheA**hole under the title, “AITA for going no-contact with my parents after learning they had lied to me about my allergies all my life?”

The OP says that their whole life, they believed themselves to be allergic to dairy, gluten, and legumes. Their parents had them eating vegetables, chicken, fish, fruit, and all sorts of healthy things instead of the familiar processed meals that are more common in U.S. households.

They never questioned the necessity of this until just a few months ago, when at their aunt’s house they mistakenly ate from a plate of normal brownies, thinking they were the special almond flour brownies that had been made to accommodate their “allergies.”

My aunt suddenly looked at me and, in a panicked way, asked which plate I took the brownies from. I pointed from the one where I got my brownies, and she immediately stood up and told me we had to get my EpiPen. She raced to ask my mother for it, and I sat there scared out of my mind because I had never mistakenly eaten flour before.

I noticed my mother had calmed her down, and then she said that we don’t have to worry because she had switched the plates of brownies, and after all I had eaten the ones made with almond flour. I found this incredibly odd because, really, why would she swap the plates? That doesn’t even make sense. But for the time being I let the issue rest. 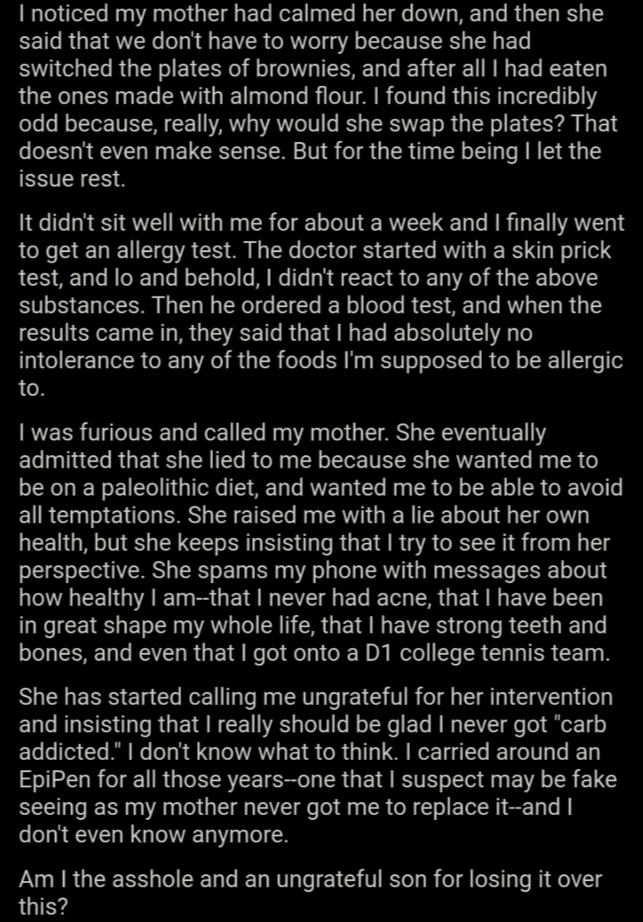 The OP says that this situation set off alarms and they decided to go get an allergy test. They progressed from a skin prick test to a blood test and eventually, the doctor confirmed that the OP had no intolerances to any of the foods their parents told them they were allergic to:

I was furious and called my mother. She eventually admitted that she lied to me because she wanted me to be on a paleolithic diet, and wanted me to be able to avoid all temptations. She raised me with a lie about her own health, but she keeps insisting that I try to see it from her perspective. She spams my phone with messages about how healthy I am–that I never had acne, that I have been in great shape my whole life, that I have strong teeth and bones, and even that I got onto a D1 college tennis team.

She has started calling me ungrateful for her intervention and insisting that I really should be glad I never got “carb addicted.” I don’t know what to think. I carried around an EpiPen for all those years–one that I suspect may be fake seeing as my mother never got me to replace it–and I don’t even know anymore.

Am I the a**hole and an ungrateful son for losing it over this?

The OP says in a comment that they were “a good, respectful kid” and would have followed their parents’ demands for what they eat on a daily basis without the huge weird lie.

As many other commenters pointed out, there are a lot of people who were affected by this lie and lots of potential repercussions for believing you have a life-threatening food allergy, like the unnecessary application of an EpiPen as one example. It’s a completely horrible thing to do to someone: 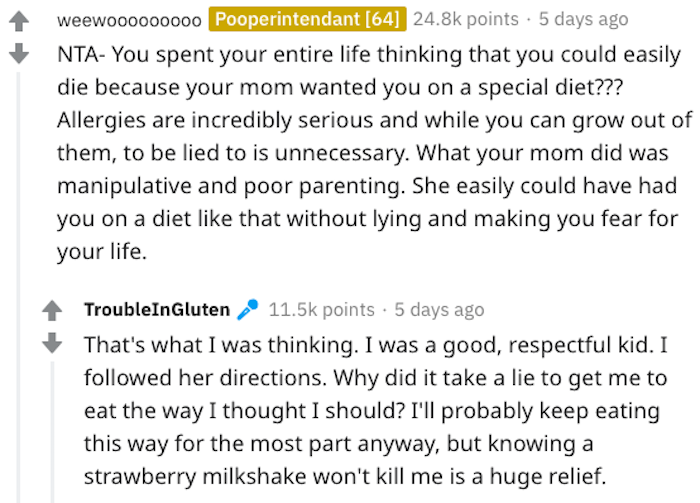 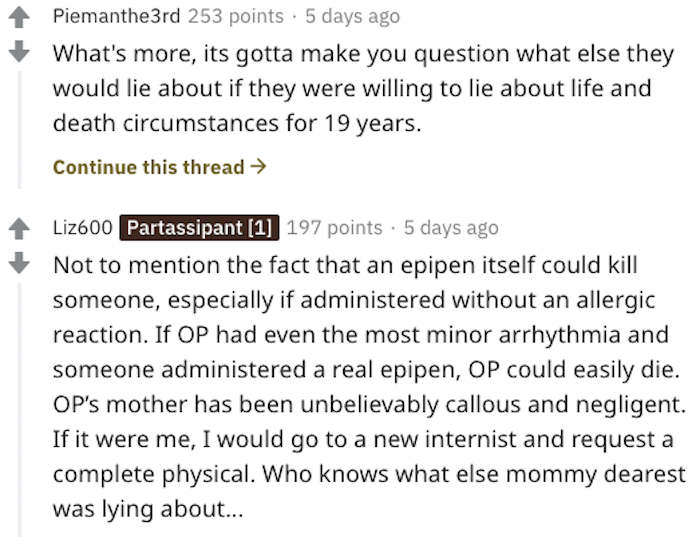 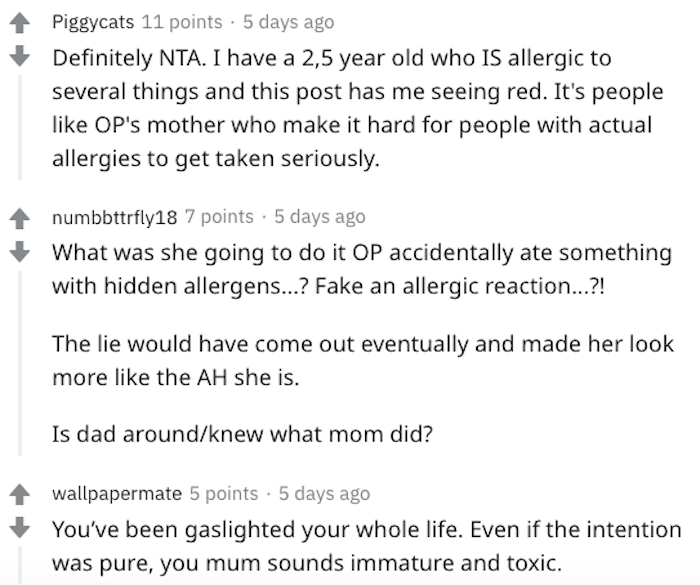 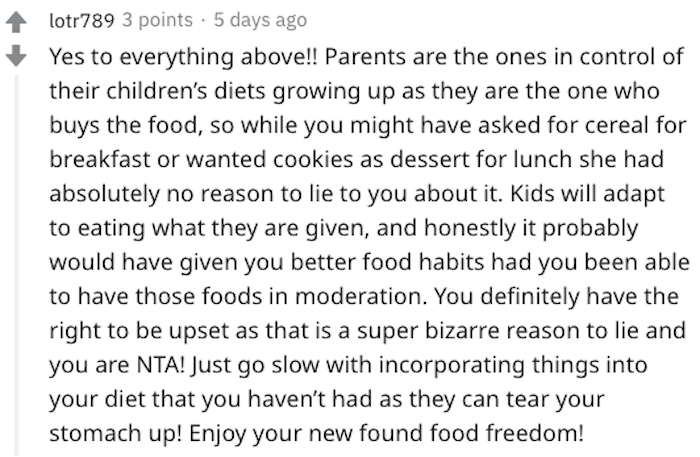 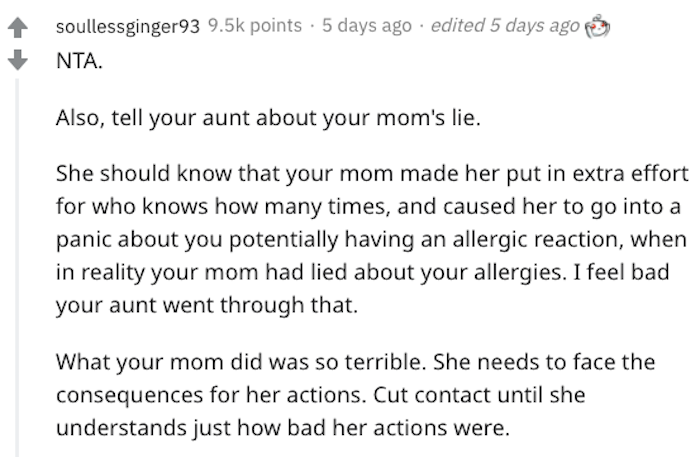 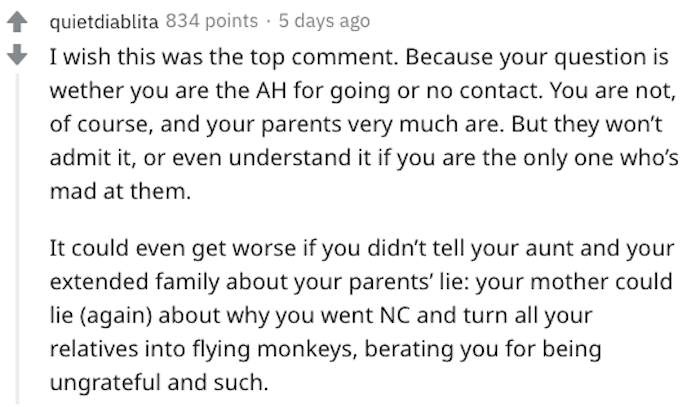 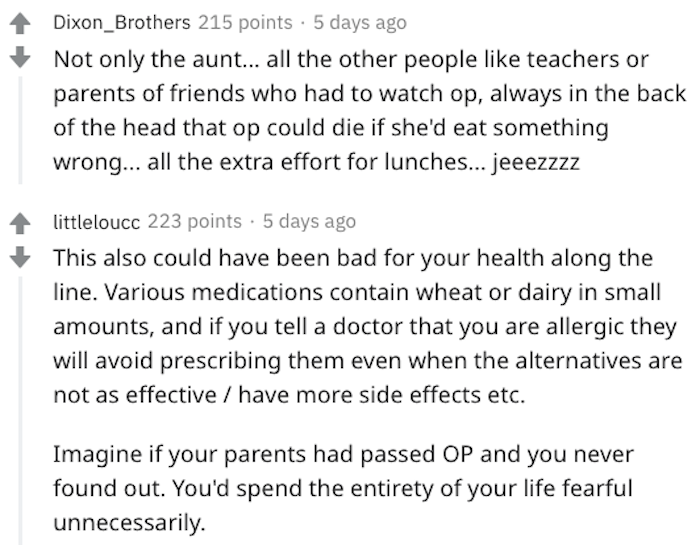 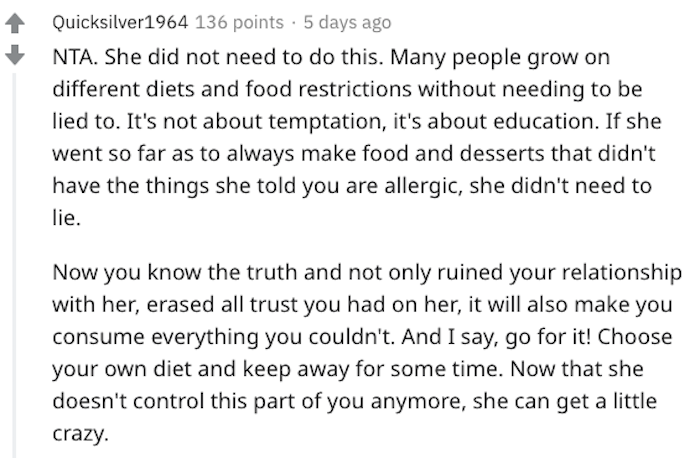 The mom in this story made her salad and now she has to eat it alone.