After reading many Reddit r/AmIthe A**hole posts about dudes not understanding how much wedding dresses cost, I’m beginning to think they should teach this stuff in health class. Yet another groom has been schooled in the comments section of their self-righteous post about spending, this time posted under the throwaway u/anon15983 with the title, “AITA for telling my fiancé she can only buy a wedding dress if I get to spend the same amount.”

He says the wedding is planned for October and he “couldn’t be more excited.” But at the moment his fiancée is unemployed due to COVID-19—which he is totally chill with. He says he can pay for them both!

Except money is also tight because they just bought a car. That’s a lot of mixed messages on where they are at financially, but I think he was trying to set up readers to think the request she made to him about her wedding dress was unreasonable. Here it is, in his own words:

Last night my fiancée came into our bathroom while I was shaving and looked a little nervous. She asked if she could buy a $350 wedding dress that she’s been looking at for months. I kind of looked at her and asked where the $350 would come from. She said we had a lot of money in our savings we hadn’t touched, and it would barely make a dent in our savings. I thought about it for a second and told her if she gets to splurge $350 on a dress I get to spend $350 on whatever I want.

She said she didn’t think it was a splurge, it was for our wedding and I could buy what I wanted but i could tell I had hurt her feelings. I told her spending $350 on a dress was a little ridiculous, and she started crying and walked out of the bathroom quietly.

When I walked into our bedroom she was under the covers and facing away from me. We haven’t talked since. I don’t feel like I’m being unreasonable but AITA?

Well, first things first. That is an extremely small amount of money to spend on a wedding dress. It is a lot of money to spend on jeans and a t-shirt. I suspect he wants his future wife to wear a dress to the wedding, not her casual Saturday clothes. While he might not be expected to know what’s normal for a wedding dress to cost (even though he has been planning a wedding!), he should be expected to talk about it with his fiancée, not make some sort of childish deal with her about it. If he is genuinely upset about the cost, why is spending double that a solution?

Many commenters pointed out that the dynamics of that whole discussion are super weird and confusing, and much more worrying than the cost of the wedding dress: 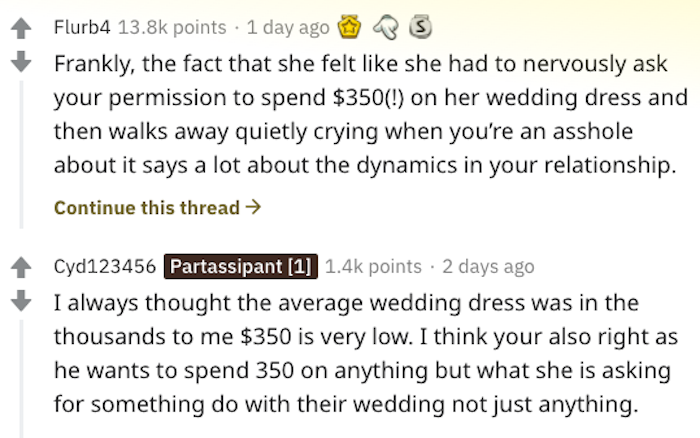 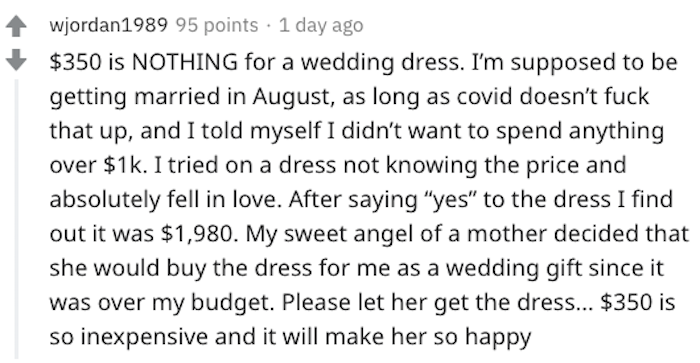 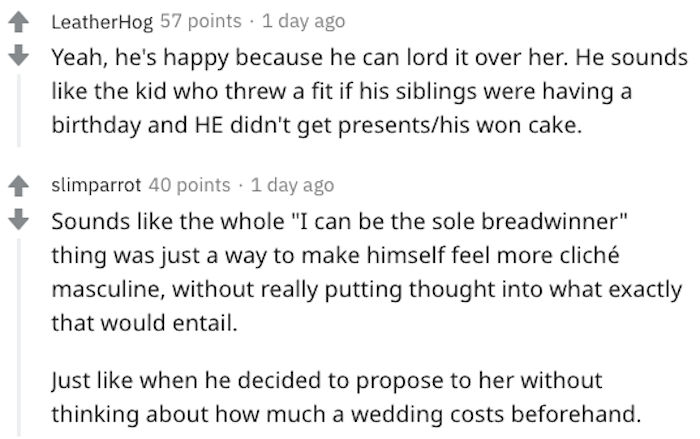 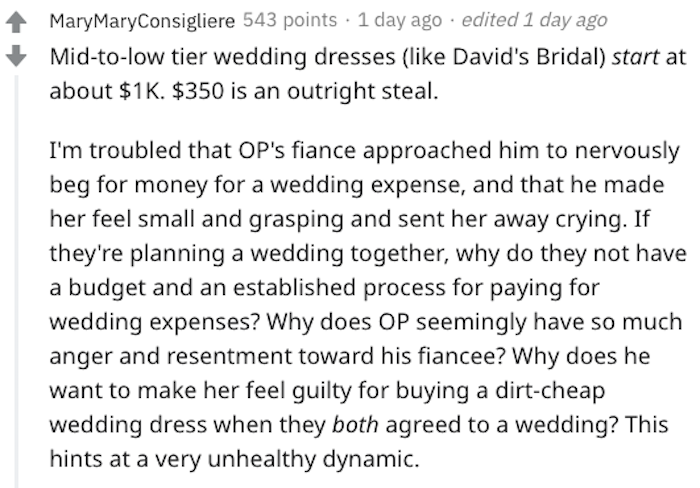 On the bright side, a series of edits show the man actually read the comments and took them to heart instead of lashing out, which sometimes happens in these cases.

Edit: I never really looked at how much dresses are. They really are expensive and that’s a shock. We paid our whole wedding and I knew that would be expensive, but since dresses are her thing and I’m not supposed to see them, I never looked. I love my fiancée and I want her to feel beautiful. I feel like a total a**hole. I just assumed wedding dresses weren’t that much unless they were like custom made or a celebrity dress.

Edit #2: the way we’ve always done things in our relationship is if I splurge on x amount of money, she gets to as well, we always have, even before she lost her job. So that was my mindset. Which was not the mindset I should have had.

Last edit: we’ve talked about it. I’ve apologized. We’re good. I’m going to put this post to rest because I learned I’m the asshole, but my fiancée wanted to read through it to laugh at me getting my ass virtually handed to me, and also share the dress she was looking at. Thanks reddit.

The link to the dress shows that as of today, the price has been reduced to about $228, so this couple is really on a roll. One last comment from u/rumourmaker18, which kind of spells out the real problem in this story: 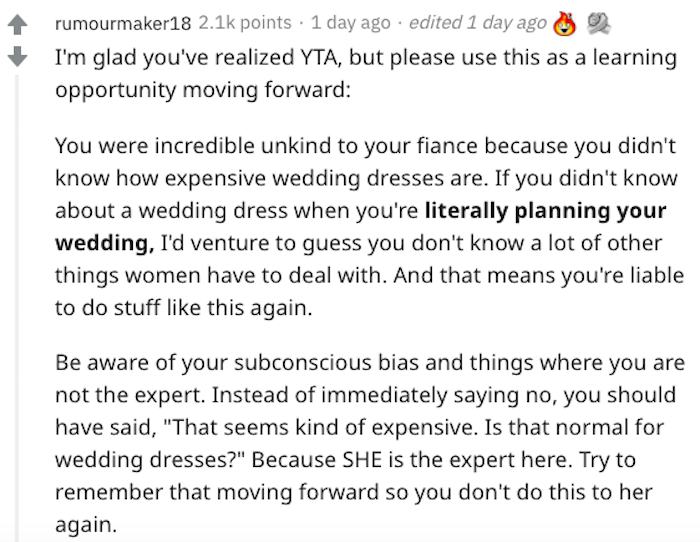 If you love someone, listen to them. Simplest and most effective wedding and marriage advice you can get, and it’s free right there on Reddit.